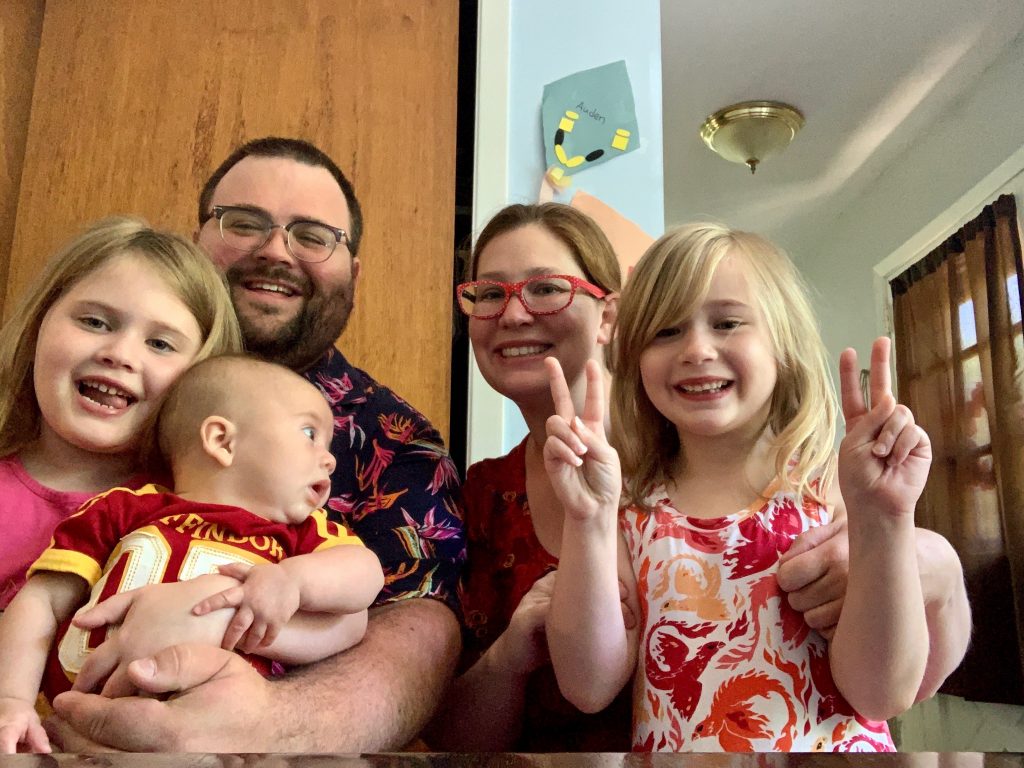 Rev. Amanda Rohrs-Dodge was only on her fourth week of maternity leave when the pandemic shutdown began last March. Her daughter, Beatrice was born one month prior and with five-year-old twin daughters, Auden and Amelia at home, life was proving to be both challenging and unsettling due to the global health crisis at hand. As the provisional elder for two churches in Sussex County, Hurdtown UMC in Lake Hopatcong and the UMC of Lake Hopatcong (Skylands), Rohrs-Dodge said she was serving “three-quarters time at a two-point charge.”

“I was on my fourth week of maternity and went back to work leading my two congregations, through all of the changes that came with the pandemic. When I began live-streaming worship services from the sanctuary instead of home, one of my lay leaders came almost every Sunday to assist in worship and then push Beatrice in the stroller while I preached and led the service,” she said.

“There were some Sundays when my mother-in-law came to sit with all the girls in church while I led worship and some Sundays when I have had to lead worship with no adult help at all. Those days were incredibly difficult, and I often wondered how I could possibly parent and pastor during the pandemic.”

But Rohrs-Dodge has relied upon her strong faith and belief in God, which has steered her through those trying days as she said that “being a pastor is never a traditional 9-to-5 job.”

“With God’s help, we have made it this far. My husband, Rev. Dr. Evan Dodge, is an ordained elder here in GNJ. He serves Belvidere UMC (Skylands),” she said. “When worship went virtual, we led a joint worship service for our three congregations from our home on Facebook Live. The service became known as Church of the Kitchen Table and continued from March until my husband’s church began holding outdoor, in-person service in July 2020. We are now back to leading worship separately live streaming from our sanctuaries.”

Rohrs-Dodge met her husband at Drew Theological School during orientation in August 2009. He had already begun his M.Div. the previous spring and was returning to campus for the fall semester while she was attending orientation, about to begin her M.Div.

“We were in several first-year classes together and would run into each other at the library, the pub and walking to and from Seminary Hall. We didn’t get much studying done, instead talking about our interests. One afternoon he finally asked me to have dinner with him. I agreed but only if he made the dinner himself. He had to cook it at my apartment because the oven at his place was broken! We stayed up till 3 a.m. and have been together ever since,” she said.

Rohrs-Dodge is originally from Baltimore, MD, having been born and raised there. She began the orientation process in the Baltimore-Washington Annual Conference.

“I grew up in a large, multigenerational United Methodist Church called Hiss, located in the suburbs of Baltimore County. My husband is originally from Maine. Many of his relatives were pastors in the Baptist tradition. He discovered the United Methodist Church while in college and became a member of the Jacksonville UMC in East Machias, ME, as an adult,” she said.

Although Rohrs-Dodge and Evan are a clergy couple with their twin daughters now six-years-old and their youngest daughter having just turned one-year-old, they have never officially served together at a church. And, according to Rohrs-Dodge, her first appointment at Asbury UMC, was just down the road from one of her husband’s churches, Broadway UMC in Raritan Valley.

“The worship times of each congregation allowed me to assist him in worship, often filling in on the organ, during Broadway’s worship service, before going to lead worship at my one church,” she added.

Rohrs-Dodge said that one of the most challenging times in their family life and ministry was in January 2019 when her husband became very ill with an autoimmune disease called Guillain-Barre Syndrome, which comes on suddenly and is often life-threatening as it can ultimately affect one’s breathing.

“Thankfully Evan’s case was caught early, and thankfully he made a full recovery and is doing well today. We were surrounded by prayer from our congregations and had the gift of a caring and supportive district superintendent. Family and friends helped to take care of the twins, and church members brought meals,” she said. “The other Methodist United Church in town, where the girls attended preschool, let the girls stay longer for daycare so that I had more time to work and to go to and from the hospital/rehab center where he was. In the midst of this frightening time, I was given the gift of experiencing the love, care and support that a community of faith can provide. I will carry that with me always.”

When asked what have been some of her greatest joys as a UMC pastor, Rohrs-Dodge replied that she has many meaningful memories from her time in ministry.

“My memories are centered around the sacraments or breaking bread together as a community such as sharing in the sacrament of Holy Communion with residents of a long-term care facility, often with my twins. Building new relationships and community or watching existing communities grow and flourish in their relationship with God and with one another is another source of great joy for me,” she said. “It is a humbling reminder of the work we are called to do not only as pastors but as followers of Jesus.”