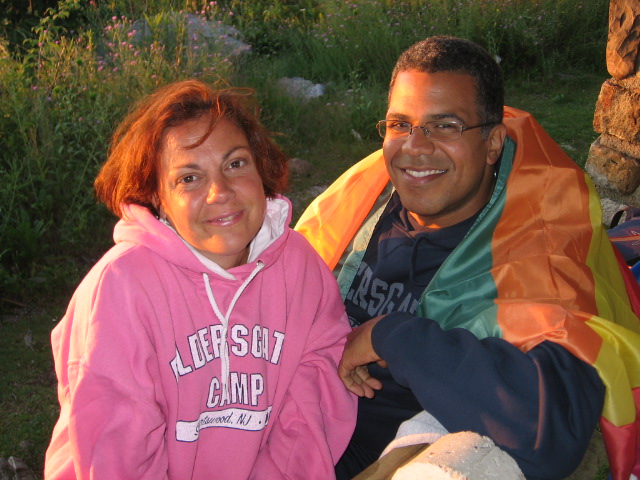 “It only takes a spark to get a fire going, and soon all those around can warm up in its glowing. That’s how it is with God’s love once you’ve experienced it; you spread his love to everyone; you want to pass it on.”—lyrics from Pass it On

For Mark Miller, Aldersgate Music Camp was not just his home away from home. From 1973-1979, it was his home as the grandson, son, brother, uncle and cousin to United Methodist clergy. And for Rev. Tanya Linn Bennett, the journey that began in 1969 sleeping at Hogan’s on a platform left her with lasting memories, friends and a decades-long friendship. Together, this dynamic duo infused what they learned as campers to direct the camp for 20 years with passion, creativity and compassion.

“The joy was palpable. That joy sustains us still today,” said Miller as he reminisced about his days spent living and working at Aldersgate. Miller is assistant professor of Church Music at Drew Theological School, a lecturer in the Practice of Sacred Music at Yale University and the minister of music of Christ Church in Summit, NJ.

From leading a rendition of Bohemian Rhapsody to help a homesick camper cope, to orchestrating a musical written by Laurie Zelman each summer, the impression these two made on many youth is also palpable as is the strong friendship and mutual respect these two share. Although on Zoom in two different locations, the connection these two shared was seamless. It was as if they were sitting next to each other on the same couch reminiscing about their days at camp.

“The environment was very inclusive. There was a love of God, love of all people, a real sense of belonging there. All people were embraced just the way they were,” said Bennett who fondly recalled Rev. Dale Forsman and the song, “Pass it On.” “In a lot of ways, he called me into ministry.”

Bennett, who is a University chaplain, pastor at Covenant UMC in Plainfield, associate professor in the Practice of Public Theology and Vocation at the Theological School at Drew University and chair of the Board of Church and Society, also remembered the outdoor chapel where years later a couple camp alumni were married and the benches built into the hill by the duck pond, saying “There was a sense of connection with the outdoors. Being outdoors allowed them to release something and build a deep relationship with God.”

Miller recalled how the final night of camp meant hiking up Sunrise Mountain, which is part of the Appalachian Trail. “Everyone shared what the week meant to them. It was amazing how transforming one week could be.”

When asked what the future looked like following the sale of Aldersgate, Miller said, “I think it can be vital again. As sad as it is to see a piece of my home go away, I still have hope for the future.”

Bennett echoed those sentiments in saying, “Camp has a spirit like no other. They can take it with them wherever they are.”