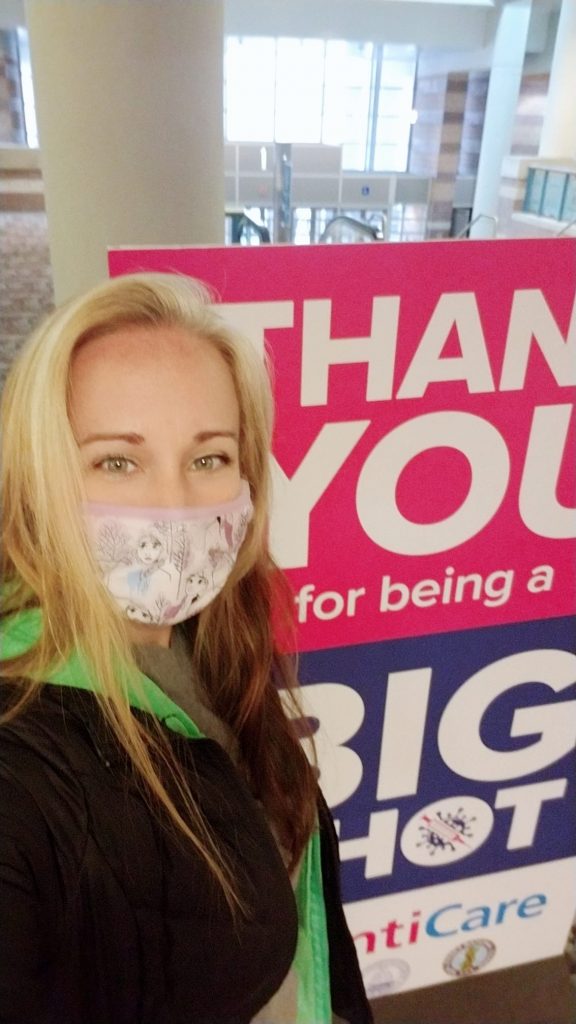 With words like race and rush used often while discussing the COVID-19 vaccine in the past year and memories for some of the Tuskegee Syphilis Experiment, it’s no wonder why some are fearful or doubtful of the vaccine’s efficacy and safety. So GNJ is delving deeper into the vaccine by offering you its journey, impact and testimonials from clergy and laity right here in Greater New Jersey.

“I can understand that people feel hesitant to get the vaccination, given that it was put out quickly,” said Cricket Denton-Brennan, associate pastor at Seaville UMC. “I was nervous when it first came out, but I did my research to find out exactly how it worked and what I was going to be putting into my body.”

She added, “This new way of producing vaccines (mRNA) is fascinating and a huge leap in science. It’s much safer than previous vaccines because it forces your body to make antibodies to the virus without actually injecting the virus into your system. This science isn’t something that was just developed this past year. Scientists have been working on it for years, and I’m so appreciative that it can be used to fight our current pandemic.”

One of the leading researchers working on the vaccine for the CDC, 34-year-old Dr. Kizzmekia Corbett said, “The vaccine teaches the body how to fend off a virus, because it teaches the body how to look for the virus by basically just showing the body the spike protein of the virus. The body then says ‘Oh, we’ve seen this protein before. Let’s go fight against it.’ That’s how it works.”

According to medical experts in an article in Medical News Today, researchers were not completely unfamiliar with SARS-CoV-2, the virus that causes COVID-19. One of many members of the coronavirus family, studies of coronavirus have been underway for over 50 years, meaning that scientists had existing data on the structure, genome and life cycle of this type of virus long before the pandemic bared down on us a year ago.

One misconception is that the vaccine would not be useful if the virus mutates.

While mutations are possible, Dr. Sam Sun, director of inDemic Foundation, a nonprofit organization that provides information about COVID-19, and a chief resident at Baylor College of Medicine in Houston, TX, said that there is a far less chance of mutation as compared to the influenza virus. “The spike protein is important for the ability of the virus to infect humans’ cells. I think it would not mutate enough for the vaccines to be ineffective.”

According to Medical News Today, the CDC will monitor safety after vaccination for acute care and long-term care facilities through the National Healthcare Safety Network. A smartphone application called V-safe in available for the general population. This tool uses text messaging and web surveys to provide personalized health check-ins after you receive a COVID-19 vaccine. Through V-safe, you can quickly tell CDC if you have any side effects after getting the vaccine.

In Cape May County, Denton-Brennan is committed to educating and getting those who need it most vaccinated. She noted that Seaville UMC is near one of the state’s six mega centers that recently opened in Atlantic City.

“It has become a mission of mine within the church to make sure all of my congregants and members of the community are able to get appointments. Because the system is complicated and completely digital, people can become confused.”

She added, “Before the mega center, appointments were few and far between. Now, appointments have become accessible, but you need to know how to navigate the website and when to sign on.”

What started as a small group of people of all ages at Seaville UMC is steadily growing in an effort to exponentially make a difference called Operation Vaccination outreach. By signing on the website with many devices when appointments become available, the “Vaccine Angels” are able to send people a simple link so that they can make an appointment when their number is called.

“We’ve taken a frustrating and complicated system that has been overwhelming for our church folks and made it as simple and successful as possible for them. This way, we are able to help people become vaccinated, because the safety and well-being of our flock is our number one priority. We have the science, we have the technology, we just need to utilize it. The local church now has the opportunity to help people become safer and that much closer to a post-pandemic world.”

For Cynthia Mosley of St. John’s Fordville in Bridgeton, GNJ’s one Native American church, standing in line to get her vaccination recently brought back childhood memories for her.

“I can remember as if it were yesterday, a little five-year-old girl walking with her mother and grandmother to a school in a neighborhood that was typically racially off limits to a diverse population. We were going to get our polio vaccine, which was being administered at this school. Our family decided we were more afraid of polio than we were of racial injustice, at least for that moment in time. Iron lung machines, paralysis, even death were real fears in those days, but my grandmother said we were going on that Sunday after church.”

“Dressed in our Sunday best, wearing those fancy shoes we reserved for church, we set out to get the vaccine. I remember the walk to the school was very somber, but the walk home was much more joyful because we felt new hope. We continued the vaccine series, and none of our immediate family contracted the dreaded disease.”

The long walk Mosley recently took from the parking lot to the vaccination megasite was similar to the walk many years ago, adding, “The walk back to the car had similarities too, because out of the 200 plus people onsite at the time, there were only four people who seemed to resemble us.”

Mosley added, “We must improve our efforts to continue to educate and inform a diverse population of the benefits of the COVID-19 vaccine. Maybe the moral of the story is to always listen to your grandmom.”

Supply and Accessibility Are Growing

New Jersey, Pennsylvania and New York now have access to three viable vaccines now that the Johnson & Johnson one has been approved by the FDA. The advantage to this vaccine is three-fold: 1) its efficacy against hospitalization/severe symptoms is 93%; 2) it does not require freezing so it is easier to transport and store and 3) it only requires one dose.

NJ Gov. Murphy said that the state will begin to ease eligibility restrictions on March 15 to people like educators and Native Americans but warned that supplies remain scarce so the impact will not be immediate. New Jersey officials are committed to distributing the vaccine in an equitable manner and also partner with churches in educating people about the efficacy and safety of the vaccine.

Rev. Merlene Taylor (First UMC Mount Holly & Smithville UMC in Eastampton): “I have received both vaccines, the second on February 3 at the Voorhees site.  I had no reactions to either shot. I am a member of the Rancocas Valley Clergy Association in Mt Holly. One of our members who is a chaplain at Virtua sent out an email to us that there was a small window opened for clergy in this area to be vaccinated. We all took advantage of it and shared it with other clergies.”

Rev. Chris Heckert (Haddonfield UMC): “I received an email from some clergy friends that the local hospital system, Virtua, was prioritizing clergy for vaccine appointments. I was surprised, because we had not been previously named as frontline workers, but I immediately called the number listed and received an appointment just a couple days later. When I went to get the vaccine, the spirit was warm, hospitable and incredibly hopeful. It felt like a celebration of the best qualities of humanity. Everyone seem to be rooting for everyone else, smiling, following the rules and making sure everyone got where they needed to safely. The shot was over before I even realized it had been administered, I waited for 15 minutes and then got to leave. I had very mild side effects of achiness and fatigue for about a day, but that subsided quickly and now I live in hope that someday soon we can move beyond this pandemic. I would love to keep the spirit of human kindness that I experience during in the vaccination process close at hand on the other side of the situation. I hope we don’t forget to have perspective, gratitude and kindness for others.”

Rev. Gary Frieze (ordained deacon at Grace UMC in Kearny and pharmacist at Inter County Council on Drug & Alcohol Abuse): “I got my second shot yesterday at 11:11 and as of this time (8:06 a.m. the next day) no effects except soreness in shoulder, which is normal with IM [intramuscular] injections.”

Rev. John Doll (Asbury UMC Cinnaminson): “I received my second dose of Pfizer vaccine February 3. After the first dose, I woke up with a swollen arm and the chills. I read the rest of the day and felt fine the next day. When I got the second dose, I felt a little achy for the next couple of days. Getting the vaccine was a no-brainer for me. When I had the reaction to the first dose, my main thought was this is nothing compared to what many have dealt with concerning this disease. Another thought was – this means it is working! The local Catholic priest called me and left a message that clergy were eligible in the first phase. He gave me a number which I immediately called and shared with as many clergy as I could including my DS. It has been a privilege to be able to get this vaccine and a miracle of medicine from our Lord.”

Rev. Veronica Palmer (RISE Church in East Orange): “I have received my first vaccination already and is expected the second on March 1. I’m feeling well.”

Pastor Jo-Anne Winzer (Delaware Valley UMC and chaplain at Karen Ann Quinlan Hospice, Newton, NJ): “I have received both shots of the Moderna vaccine. With the first shot in January, I had a sore arm and a little tired. Second shot on February 5, and I reacted with fever, headache, body aches and very tired. It was like having the flu but lasted about 24 hours.”

Rev.  Dr. David Montanye (First UMC of Avalon): ”I have said to my congregation from the beginning of this pandemic that our priority is keeping safe our most vulnerable members, and that is still our highest priority. I still have not received a first shot even though I am eligible as being over 65, having recently had cancer and being chaplain to the Avalon Fire Department. My experience in Cape May County with the megasite in Atlantic City has been frustrating to say the least…I have tried four times to get an appointment. The members of the congregation have had mixed results. Some have received their first shots, some have not been able to. One elderly family I know had to travel two hours to Moorestown where they have been able to get an appointment while several others have received a shot right here in Community Hall in Avalon.”

Lew Weil (United Methodist Men): “Second dose is a winner, for my arm is swollen. The VA in Brick said most people run a high fever. If it lasts more than two days, call them for advice and take aspirin. I received the second shot today.”

Lan Wilson (GNJ’s director of resourcing and worship): “A day after Moderna shot #1, my arm is sore, but it’s not terrible and I am continuously tired. Nevertheless, thank God for science and coffee! I was feeling some mild flu-like symptoms yesterday, but they have subsided today. Overall, feeling great.”