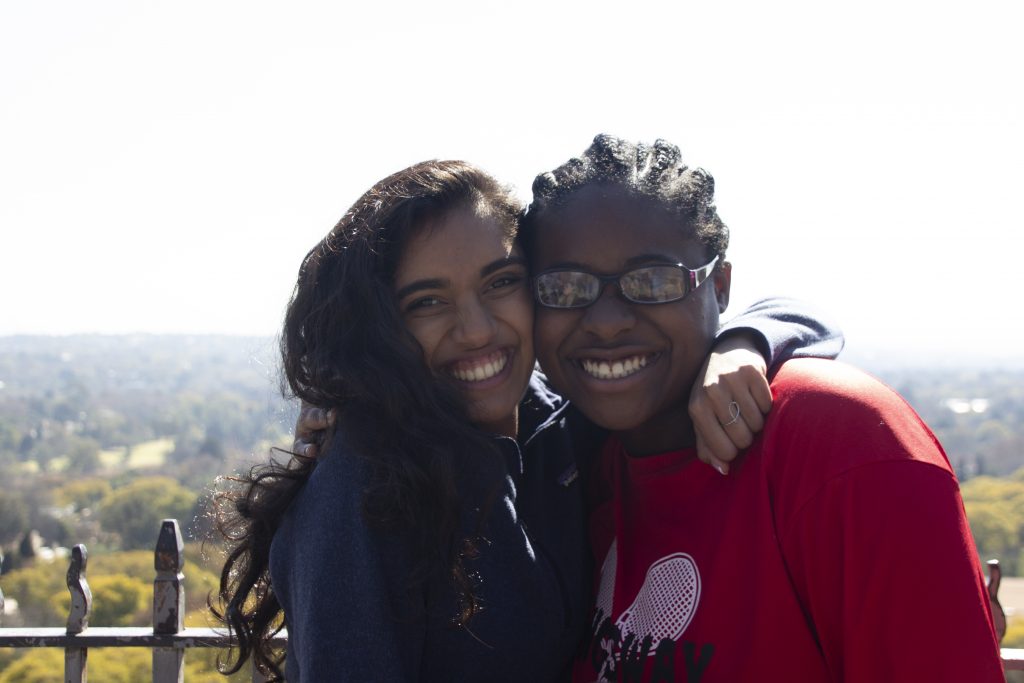 Moselle Jules (right) of Haddonfield UMC returned from South Africa where she attended The Global Young People's Convocation of The UMC. Photo provided

One of the beauties of The United Methodist Church lies in its embrace of young people. Children, teens, and young adults are the growing leaders of the denomination, therefore, creating opportunities for young people to engage in the work of the church at every level is critical. One young leader from Greater New Jersey, Moselle Jules from Haddonfield UMC, knows firsthand the importance of being engaged in the work of the church, both locally and internationally, as she recently returned from the 2018 Global Young People’s Convocation (GYPC) held in Johannesburg, South Africa in July. Jules shares a bit of background on the convocation, who is involved, what she learned, and some words of wisdom for the church that can be taken to heart.

The Global Young People’s Convocation (GYPC) is a quadrennial gathering of United Methodist young people from around the globe. Structured similarly to General Conference, and likely modeled after it, every four years young people come together to engage in fellowship, community, and worship while learning valuable lessons about leadership and the church. Like General Conference, GYPC holds a legislative forum where young adults come together to discuss issues they care about and are relevant in the church. The outcome from these conversations often result in statements, resolutions, and calls to action — many of which will be sent to the next UMC General Conference for consideration. When asked to explain what GYPC is for those who aren’t familiar, Jules shared a bit about her personal experience from this summer’s conference:

“It’s basically like General Conference but for youth all over the world,” she said. “We create legislation that gets passes and it goes to a vote; they can either add it or say no. I was a non-voting member but I still got to be a part of everything. And since it was held in Johannesburg, they allowed us to not only think about the current topics and issues that are affecting the church now but also allowed us to explore the local culture. I got the privilege to go to the Apartheid Museum which was very eye-opening. It really makes you think, especially when the people who suffered such atrocities look like you.”

The legislative sessions are some of the most important sessions at GYPC because they give young people a voice on issues and conversations happening in and around the church. With the Commission on a Way Forward approaching early next year, racism and the LGBTQ community were popular topics at this year’s conference.

“We were broken up into groups and mine specifically spoke about racism and the LGBTQ community,” said Jules. “Because the Commission on a Way Forward is coming up soon, we had two representatives from their group there to talk with us. Everyone expected it to be heated, but no one was yelling or shouting.”

Although the conversation got heavy at times, Jules noted that her group dynamic was most important. It’s on trips like these that members of the church – The United Methodist global church with various cultures, traditions, and customs – can come together and spark true friendship based in the love of Christ.

“I was very happy with our group,” she said. “We all told individual testimonies, but our group leader’s resonated with me most. We were also pretty open with each other which I think can be hard to find, especially now because everyone can be so uptight. My small group was pretty amazing.”

Jules grew up in South Harrison, N.J. where she attended Haddonfield UMC. Since 6th grade she has embarked on mission trips annually. Last year she went to Cuba with Mission of Peace (MOP), a yearly journey of discovery and Shalom to nations in the global community. She also went to the Bahamas with her youth group, working at the Bahamas Methodist Habitat. Jules, who is very active in her church, describes being a part of Christ’s body as something that defines her.

“It’s something I’d never trade in or give up,” she declared.

Jules’ spirits were high throughout the duration of the conference, and when asked about her favorite part of the gathering, she responded simply, “wearing my translation device.” Seeing that there were so many people from around the world present, the translation devices allowed everyone to follow along in real time in their native tongue.

“We’re all so different but we’re all the same, and language can connect us all,” she said. “I just think it’s amazing how global our church is because I only really ever see things from a local level. It’s pretty amazing to see how worldwide our church is and to understand that youth and young adults who are my age care just as much about these issues; we care about the same things.”

Jules expressed gratitude for being selected to attend the convocation, and for all the support she received on her trip. When asked if she had any advice for the church as a whole based on her experiences at GYPC, she simply shared, “That it’s okay to have hard conversations. I know it’s easy to judge people, but if you get through that conversation, and at least try to understand where that person is coming from before coming up with a resolution or solution, then things could be better.”