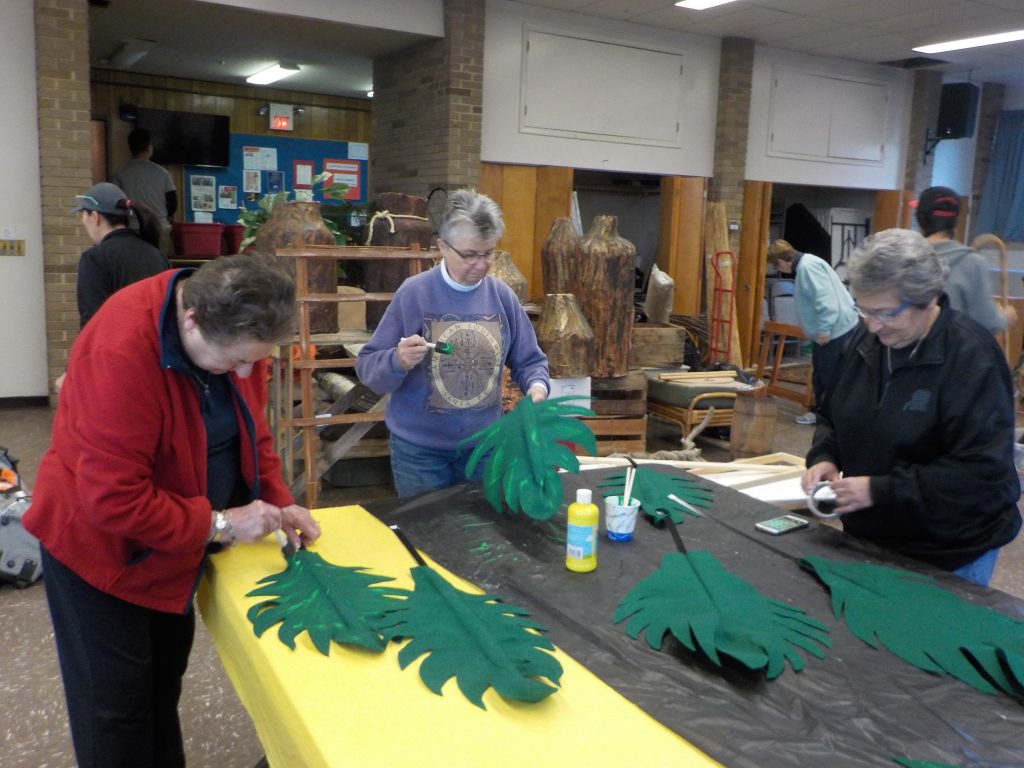 Participants gather to build props for the Neptune church's annual Christmas event which has grown tremendously over the years and has brought out many from the community and beyond. Photo provided

NEPTUNE – With Christmas commercialism at an all-time high, there is a Neptune church that has dedicated itself to showing the real reason for the season every December for the past five years. West Grove United Methodist Church is continuing its annual tradition once again with its presentation of “The Streets of Bethlehem and Live Nativity” to their local community as visitors of Bethlehem are allowed to experience the “sounds, sights and excitement of that fiNEPTIUrst night.”

“Each year West Grove UMC transforms it’s Fellowship Hall and church grounds into a re-creation of the streets of Bethlehem on the night Jesus Christ was born,” according to Lois Hart, a nine-year church member who portrays a spice merchant at the event. “The most important aspect of the presentation is to remind or even introduce people to the true meaning of Christmas which is often forgotten and lost in our commercialized culture.”

Within the past six years, the attendance at the Streets of Bethlehem has increased tremendously with 50 people experiencing the first one to more than 500 people attending last year’s event.

“This event is the church’s largest both in time and in preparing for the night. It also draws the largest number of visitors coming to the church,” said David Bacon, an Events Team member who plays the role of the Head Shepherd at the event. “The Streets have grown in our scope of presentation and by the number of visitors attending. We have members of the community at large and several area churches volunteering at the event as well. The church looks forward to the Streets of Bethlehem every year because it’s an event that has just about every church member involved in some way. The church is very relationship-oriented and the West Grove/Memorial UMC congregation has evolved into a close church family.”

He added that the event is a strong catalyst for that sense of “family and belonging with “the greatest joy of this night sharing this sense of relationship and family with our community while exposing that community to the true and real meaning of Christmas.”

“We feel that today’s society is distracted by commercialism and selfness for those celebrating Christmas and miss or overlook the significance of the birth of Christ which brought light to a darkened world through hope, love, peace and joy,” he said.

Those who walk the Streets witness market vendors such as the potter, the basket weaver, the yarn dryer and weaver, the baker, and the fishmonger who all encourage the visitors to buy their exotic wares with the Roman coins received when they first enter Bethlehem. Many of the market vendors demonstrate their skills and visitors can sample a variety of food from that time period such as olives, dates, figs, cheese, honey and hummus. Last year camel and King silhouettes joined the Nativity display as well as a vineyard which was added to the marketplace.

According to Sandra Fornino, who has been a church member for more than 30 years, the Streets project is a big undertaking by church members who in addition to attending workshops also begin construction of props, costumes and gifts several weeks before the event.

“It is the biggest event, both time and production wise. We have added new backdrop scenery and new booths,” she said. “Last year we added the wine making scene with a church member actually stomping grapes in her bare feet!”

“All of our characters are fully costumed and engage visitors in conversation,” said Judy Bennett, a nine-year church member who has portrayed the fishmonger for the past six years. “People can interact with others milling the busy streets with those such as the census taker, the money changer, and the Roman soldiers. Many costumes were created by UMC members. It requires many additional costumes which were designed by team members according to the clothes of time period.”

Bacon said he believes that the Streets of Bethlehem has grown in size and has generated much appeal to the public because today people are seeking something that is lacking in daily societal living.

“It may not be defined as specifically seeking Christ, but people are searching for something that is of substance and has sustained human value. That is part of the attraction of Streets. For some it’s a reaffirmation of this Christian faith. Others view it as a nice family outing where they can take a step back into the biblical times and examine what the town of Bethlehem might have been like when the story of Christ began,” he said.

Fornino added that many of those who come are return visitors who say the event helps them get into the true spirit of the holiday.

“It’s the idea of putting Christ back into Christmas and taking time to remember what this special season is really all about,” she said.

Bacon agreed, saying, “I personally enjoy participating in the Streets because after weeks of hard work by all of us, the feeling of joy that overwhelms you when you see the vast number of visitors enjoying themselves and being moved in various ways by our efforts to tell and to show the message of Christ is a fulfilling, priceless experience.”

West Grove UMC is located at 102 Walnut Street in Neptune. For more information contact the church office at 732-774-6748.