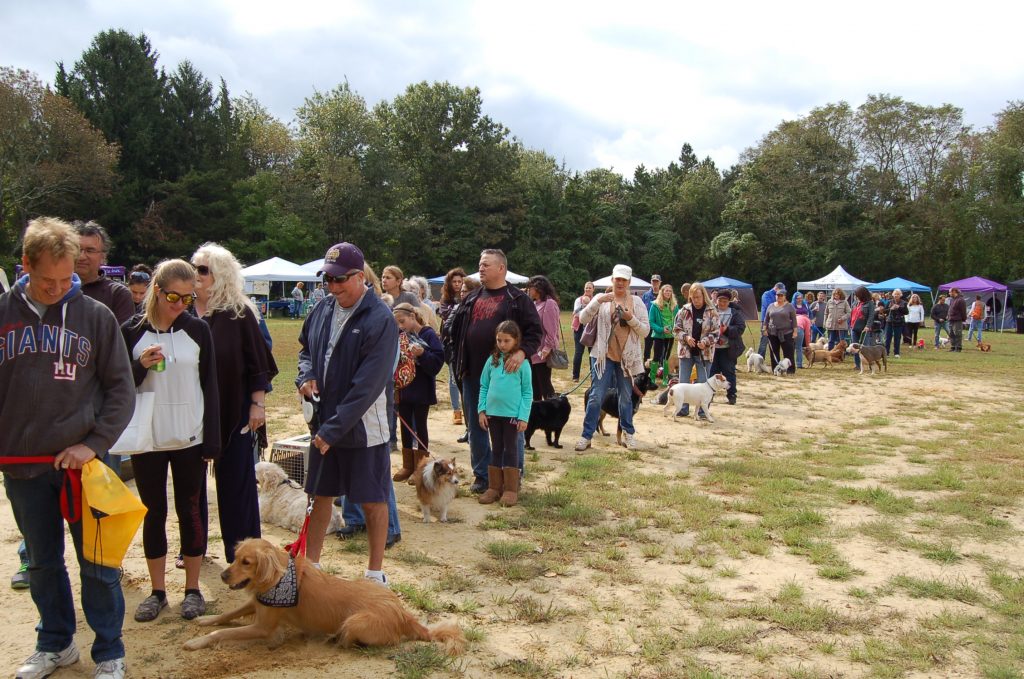 BRICK – God’s charge to care for the animals of the earth is taken very seriously by the members of St. Paul’s UMC in Brick. Each year they set aside a day to offer a community outreach family event celebrating the relationship between pets and their owners.

Saturday, October 20 was the church’s 7th annual Blessing of the Animals, Pet Adoption Day & Pet Fair attracting a crowd of several hundred pet lovers throughout the community. Over 125 pets, large and small– dogs, cats, a hamster, two turtles and a chicken were presented to Pastor Alan Darby and Youth Director Hector Mezza, to receive an individual blessing and a prayer square as a memento of the day. Darby also blessed a number of pets over the telephone whose illnesses prevented them from attending.

As part of the blessing ceremony, the event emcee for the last five years, Christopher Lytle, of ONPOINT Celebrations, created and produced a Pet Memorial Tribute Montage of pets who have passed away but will forever live in owners’ hearts. This year’s montage entitled, “Welcome Home” included sound clips of Lytle’s grandfather, who was a Methodist minister, leading the Lord’s Prayer interspersed with photos and the song “I Can Only Imagine” by Christian rock band Mercy Me. As photos of beloved pets displayed on the screen, the experience was aptly described as both “spiritual” and “full of hope.”

St. Paul’s family of vendors, many who have been attending for the past five years, offered numerous items to pamper pets as well as their owners.

Over ten local shelters/rescues were in attendance with their “adorable adoptable’s” hoping to find their “furever” homes.  Several adoptions took place at the event and many others were finalized during the week after a “meet and greet” at the event.

One of the event’s highlights is the Law Enforcement K9 Officer’s and their four-legged partners. Officer Casullo from the Ocean County Sheriff Department brought her bomb dog, Bear, who demonstrated his skills at locating “black powder.” Sgt. Stryker of the NJDOC, demonstrated with his K9 partner how suspects are apprehended.  Officer Prenderville and Officer Smith from the Brick Township Police K9 unit further demonstrated how canines are used to keep people safe.

God’s presence was felt throughout this community outreach event celebrating all God’s creatures,” said Ivy Kim, who attended the event.

The Blessing of the Animals, Pet Adoption Day and Pet Fair is a part of St. Paul’s commitment to mission, ministry and outreach that connects with people in the community through relevant ministries. St. Paul’s in Brick took their pet blessing tradition outside and invited their community to take part.