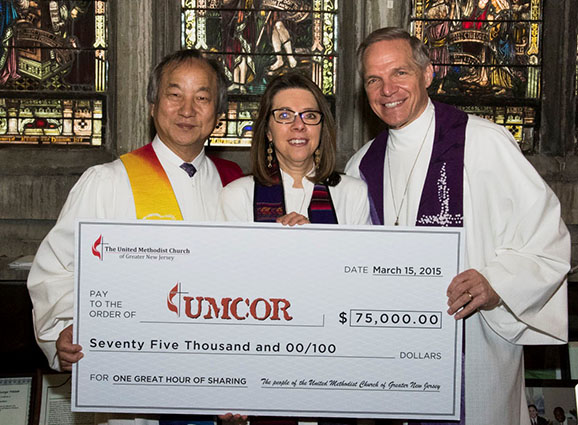 When the United Methodist Committee on Relief was formed in Atlantic City 75 years ago, its mission to help others in the world was clear. Just who was going to accomplish that mission was more of a gray area.
For the organization known as UMCOR, that answer has become crystal clear since then. “We are UMCOR,” Greater New Jersey Bishop John Schol said to the about 250 in attendance at UMCOR’s 75th Anniversary Celebration at Asbury United Methodist Church in Atlantic City Sunday. “When people hurt, United Methodists are there to help.” UMCOR’s help to Greater New Jersey has been needed and felt in many instances. Most recently it has been with ongoing recovery from Superstorm Sandy in 2012. UMCOR’s funding and partnership has helped A Future With Hope, an arm of the GNJUMC, continue to rebuild damaged and destroyed homes. A Future With Hope has rebuilt 133 homes in all with more than 9,000 volunteers. In Atlantic City, A Future With Hope has rebuilt 33 homes with more than 1,800 volunteers.

Those volunteers have come from all walks of life, many with housing construction experience and some with little or no such experience. “God calls the unlikeliest people to do amazing things,” UMCOR Deputy General Secretary Denise Honeycutt said. “And I see a lot of unlikely people out here.” Some of the people in Sunday’s audience were UMCOR President Bishop Hee-Soo Jung, who leads the Wisconsin Annual Conference, Atlantic City Mayor Don Guardian, representatives from the New England, Susquehanna and Eastern Pennsylvania Conferences and New Jersey Assemblyman Vincent Mazzio.

Bishop Schol emphasized to everyone in attendance that UMCOR’s call is not just about constructing houses and buildings, but also developing relationships with those in need. He told a story of two Atlantic City families who were helped by A Future With Hope. One family could only live on the second floor of its home due to damage from Superstorm Sandy. After A Future With Hope volunteers restored the first floor, the family offered to rent the newly refurbished first floor to another family in Sandy recovery who was working with A Future With Hope. “We’ve done more than just rebuild two homes,” Bishop Schol said. “The people we help pass forward the love and care we have shown them. We’ve helped create new bonds and relationships that will last after we have helped them recover.”

Honeycutt reminded the audience that recovery was likely on the mind of Bishop Herbert Welch at the first United Methodist General Conference in 1940 in Atlantic City. He, at the age of 78, had the vision to create the relief organization in the midst of World War II and was UMCOR’s executive director until he was 86. Honeycutt named some of the nearly 100 countries and places that UMCOR has worked in since then, including South Sudan, Darfur, Burundi, Mozambique, Sierra Leone, Liberia, Philippines, Myanmar, Thailand, China, Nicaragua, Guatemala, Argentina, Bolivia, Paraguay, Ecuador, Haiti, Syria, Turkey, Iraq, Lebanon, Armenia, Afghanistan, Bosnia and Ukraine.

The work has included assisting in Ebola treatment, rebuilding homes, providing prosthetics to land mine survivors, funding clean water and sanitation projects, preventing children malnutrition, establishing refugees camps, preparing sewing kits, and responding to war torn areas, just to a name a few things in more recent years. Honeycutt, added too, that UMCOR is present in the United States when needed. “You all know too well the devastation caused by a superstorm like Sandy, or the destruction of a wild fire or tornado, or chemical plant explosion,” she said. “In the U.S., UMCOR is there to partner with conferences, training volunteers and offering financial support – all made possible because of faithful church members like you.”

UMCOR has been faithful in serving Greater New Jersey in the aftermath of other disasters, not just Superstorm Sandy. Those have included after Hurricane Agnes in 1972, Hurricane Floyd in 1999, the Healing, Encouragement and Advocacy Response in Tragedy (HEART) Unit after the 9/11 terrorist attacks and Hurricane Irene in 2011.