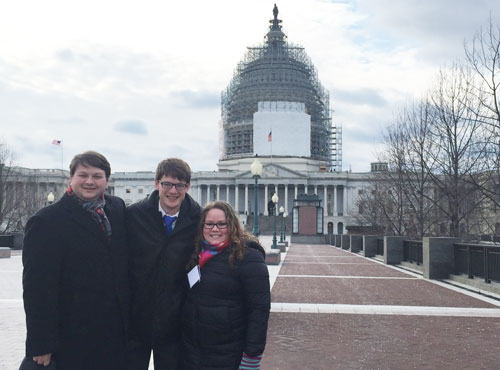 The journey of ministry can sometimes seem a little overwhelming and even a bit lonely for a young pastor. But GNJ pastor Kaleigh Corbett was reminded that she was not alone when attending the 12th Young Clergy Leadership Forum hosted by the General Board of Church & Society in Washington, D.C., in late January. “Ministry can be isolating at times, especially being a young person,” said Corbett, who is the associate pastor at Bishop Janes UMC in Basking Ridge. “A lot of my favorite parts were just networking and talking with people at dinner or after dinner. “There were two young women from Louisiana who were dealing with the same issues that some of the churches here in New Jersey are dealing with. I said to my roommate that I felt like these were heart people that I met.”
There were 60 young clergy, including Efrain Zavala, the senior pastor at Oasis UMC in Pleasantville and associate pastor at Tuckerton UMC, who attended the forum from 33 different conferences from around the country. Corbett said developing relationships with others in similar stages of life and ministry was a highlight. “I think the No. 1 thing I took out of it was just being able to connect with other young clergy who were very like-minded,” she said. “Living out the Matthew 25 challenge, was a big part of everything we talked about. We were able to look beyond differences and really come together and say how we are going to do that.”
One thing Corbett said she feels led to do is live out that Matthew 25 challenge where Christ talks about how to treat “the least of these brothers and sisters of mine.” But she also found some brothers and sisters in an unexpected place. That occurred when Union Seminary hosted a Faith and Politics event on Capitol Hill. “One of the neatest things was to experience Union on the Hill Day,” she said. “It was a panel of different congressional representatives and Representative James Clyburn (of South Carolina) was one of them. He challenged us to expect the world to see a sermon, rather than hear a sermon. That was really powerful and challenging to me. It caused me to look at my life and look at the ministry I do and ask how am I showing the world a sermon?”
Several other senators and representatives also discussed their beliefs and how that influences their work in Washington. “It was a neat experience to hear these representatives talk about their faith and how it impacts what they do,” said Corbett, who has been at Bishop Janes for 5-1/2 years and is scheduled to be commissioned at Annual Conference this year.
Corbett said it was also neat to be with other United Methodists, who while having different viewpoints on issues, made staying united a top priority. “It was a reminder that we should be focused on what it means to be United Methodist in the first place,” she said. “Despite where we might lie on the spectrum, we as young clergy were able to say let’s focus on what makes us United Methodists.” Corbett said she also was able to focus on why she chose to enter ministry. That choice was reaffirmed by the closing message given by Rev. Vicki Flippin from The Church of the Village in New York City.

“She preached about Moses crossing the Red Sea and how we are to find spiritual friends who are here to remind us of who we are,” Corbett said. “It reminded me why I came into the ministry in the first place. It brought me back to the core of my identity and the core of my call. “It was a really grounding experience for me and reminded me that I am doing the right thing. It’s always good to have those moments.”

Find out more about Bishop Janes UMC in Basking Ridge