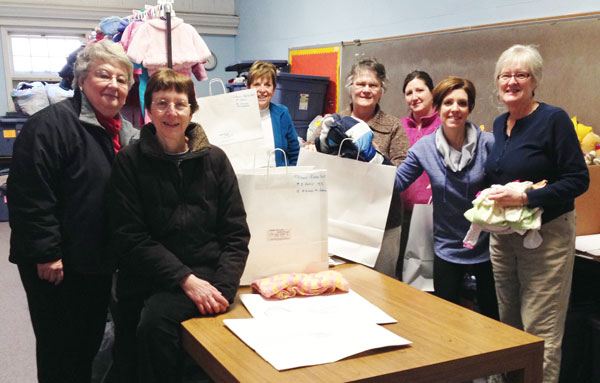 When St. Andrews UMC in Cherry Hill started its Little Hands, Little Feet program, the church just wanted to do a good thing. Those involved with the ministry that provides clothes to children had no idea it would turn into such a big thing. The outreach has grown from providing clothing to about 100 children in 2008, to 300 in 2013 up to nearly 600 in 2014.

Those who help organize and run Little Hands, Little Feet only expect to see these numbers increase in the coming years. “When we got a call from the Red Cross this winter for a request for children’s clothes, that made us go ‘wow!’ ,” said Sandy Weaver, one of the ministry’s main volunteers. “That’s when we realized it’s not just a neighborhood thing anymore since the Red Cross knows about us. But that also pointed to how much need there really is.”

The ministry that began in 2004 didn’t grow by simply existing. An important part of the process was getting the word out about the church’s willingness to help. “About three years ago we went to a resource fair with area social workers,” Weaver said. “From that point on this ministry has really skyrocketed. The need was clearly there and we were looking to connect with those who are in touch with people at risk. We began to see a real up-tick in the amount of children that were referred to us.”

As the requests have increased in recent years, so has the need for appropriate clothes. Weaver, along with Valerie Jorgenson, Ruth Birchmeier, Barbara Hansen, Lin Czerwinski and Marilyn Ivers, has a variety of methods to find acceptable clothing.“We go to a number places,” Czerwinski said. “We started hitting yard sales and that was really one of our biggest spots. We have a flyer about our program that we hand out, and sometimes people will ask what size we need. Once they find out what it is for, a lot of people are very generous. “We had two families say that we could just have everything when they were done. One woman who was raised in a foster home gave us a bunch of clothes and then she called her sister who gave us some clothes.”

The group has also connected with a popup consignment sale. “The families that consign can either take the clothes they don’t sell back or they can donate them,” Ivers said. “The last sale got us clothes for 137 boys, 123 girls, three bags of books and a dozen jackets.” While the clothes are considered gently used, the ministry only gives out new underwear and new socks. They take donations in the form of Kohl’s Cash and they turn in recycled printer cartridges to Staples and use Staples Rewards to purchase items as well. “We are continually trying to gather up donations,” Weaver said. “We are the place to bring donations for clothing if you have it.”

The other part of the ministry is physically sorting out clothes by gender and size. Church volunteers usually meet on Wednesday mornings, and twice a month they are joined by Kohl’s employees, who donate their own time as part of the Kohl’s Cares service program. “The Kohl’s employees work in clothing and are really good at sizing things for us,” Jorgenson said. “We have one volunteer who comes every other week no matter what just because she loves our ministry and how we work.”

The work of Little Hands, Little Feet has expanded from St. Andrews’ home area in Camden County to Burlington County to the north and Gloucester County to the south. With such a great need, one of the goals of the St. Andrews’ group is to help other churches start a similar ministry. “It is very difficult for us to meet all of the challenges that are being made known to us,” Weaver said. “We would love for other churches to see this as a way to reach children who are at risk.” Ivers said the biggest hurdle can be just getting started, but that shouldn’t intimidate those who want to help. “My first reaction would be that you can do this,” she said. “Everybody knows somebody who has children who are outgrowing clothing. I would tell them you can do this and we will help you.”

When the volunteers from St. Andrews sort clothes, they imagine who will eventually be wearing them. “Our Pastor (Richard Work), talked about how much joy we get from folding outfits,” Weaver said. “We look at the clothing and picture the child who is going to be wearing it. We think about a baby, a toddler or a junior high child who is at risk. Richard said to me, you are really praying aren’t you? As we think about this child, think about the books, and the stuffed animals we are putting in the bag for them, it is a form of prayer for each of these children.” And that just may be the best thing of all.