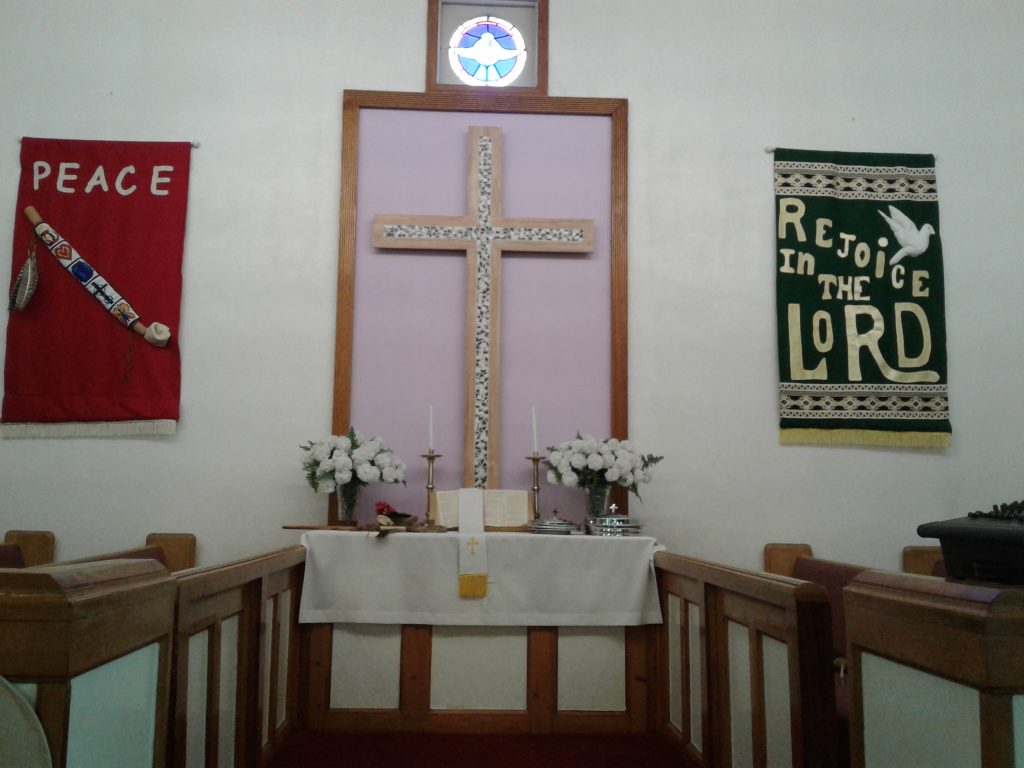 BRIDGETON – St. John United Methodist Church in Bridgeton, Cumberland County, the only Native American Methodist church in GNJ, has recently been adding to the cultural environment which was already a marker in our designation as a historical Methodist Church. The altar and chancel have been redesigned to include a legacy seven foot wampum cross which they believe will stand until the ‘Second Coming.’

Eastern Woodland Tribes living near the sea made wampum from the interior of the quahog clam shell which is white and various shades of purple in color.  Many of the members of St. John UMC claim Lenape Tribal heritage and can trace a word in the indigenous language, Sewanacky, to a description of Long Island, the natural habitat of the quahog. The shell was often made into small cylindrical beads which were used for ceremonial purposes, gifts, treaties and agreements, and storytelling among the tribes. The colonial Europeans actually adopted wampum as money from 1631-1673 in New York, New Jersey, and Delaware with certain communities continuing the practice through the early 1700’s.

Narragansett artist Allen Hazzard was commissioned to design and make the wampum cross for St. John UMC. Over a six month period Mr. Hazzard gathered the white oak for the frame of the cross as well as the quahog shells which comprise the wampum.  He walked the eastern woods and prayed to the living oak tree to understand why he must take its life for the cross. Then he harvested quahog clams from the cold autumn waters of the Long Island Sound, praying to the Creator for understanding for taking the life of each clam for His glory.

This cross is a work of art which will not only be the center of the worship experience today but the legacy for future generations who worship in our church. They will continue to share the reason for its being until “the sky cracks open and Jesus Christ returns for His church.”