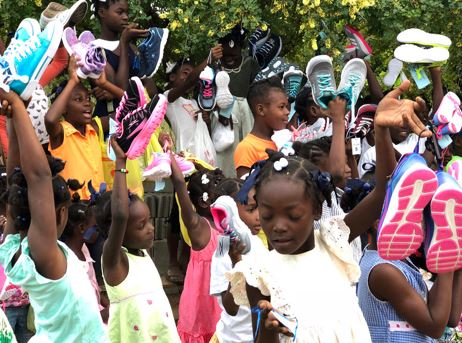 Haitian children celebrate their new pairs of shoes provided by the congregants of St. Paul’s UMC in Brick. Photo provided

BRICK – In January, a team of 15 from St. Paul’s UMC in Brick returned from Lac’Ajue, Haiti, where they sought to build relationships and connect with the community. For the past four years St. Paul’s has partnered with Aslan Ministries of Red Bank and Step of Faith Ministry of Brick in ministry to Haiti and in return, received changed hearts and lives themselves.

“Haiti means ‘mountainous land’ and a Haitian proverb says, ‘After a mountain, another mountain,’” said Doug Buechler, Missions Chair at St. Paul’s and a trip participant. “Each day a person wakes up realizing that he will climb with all his might all day and into the night to reach the top of the mountain in front of him. And tomorrow, the next day and every day of his life he will awake to another mountain that is equally tall and equally hard to climb.”

This year the team from Brick ran a four day Bible Club which included 86 girls and 75 boys ranging in ages 4-13. The camp included singing, a Bible story and skit, craft, snack, relay game, parachute play and soccer .during the four days of camp.

The mission trip was bigger than just those who attended the trip, rather they represented a whole church of supporters.

• The UMW Circles provided 25 hygiene packs.
• The knitting and crocheting group made prayer squares and pocket crosses.
• The congregation provided 50 pairs of sneakers.
• The Sunday School children raised money from their mission walk to provide a meal of rice, beans and fish to the Haitian children and made each camper salvation bracelets.
• The congregation provided a crutch to a stroke victim that will assist his walking.
• One parishioner provided a personal collection of Beanie Babies for the children

“We couldn’t wait to be with these kids,” said a participant from St. Paul’s. “And many of them arrived hours before, waiting patiently for the program to begin.”

English as a second language was also taught to 35 of older teens in an effort to provide additional opportunities.

The team repaired the community faucets that provide clean water and installed an additional 500 gallon cistern to keep water flowing for the village. The team was also able to repair leaks in the roof of a clinic and paint the inside trim. A centrifuge blood machine was provided to the clinic to make blood analysis more accurate.

Rice and beans were distributed to 66 families through the Grains of Grace program run by Step of Faith. This year, a ‘pay it forward’ goat program was instituted and nine families received a goat. With the goats, families can establish a business and income; a challenge to most families due to the lack of business infrastructure in Haiti.

“This trip is not only fulfilling but life changing,” said Buechler. “In Proverbs 14:31 it says ‘Whoever oppresses a poor man insults his maker, but he who is generous to the needy honors him.’ The people of Lac”Ajue certainly touched the hearts of the team members who will keep them in prayer.”