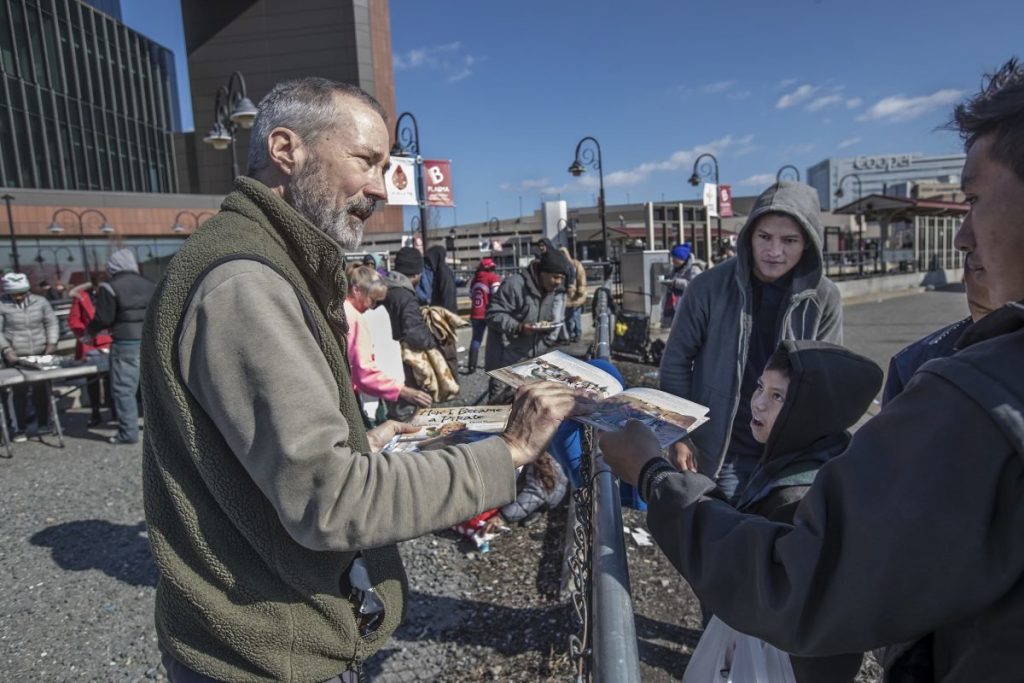 Tom Martin (left) hands out books as they wait in line for food in a parking area near MLK Blvd. The Camden County Pop Up Library distributes free books to homeless and other folks in need downtown and at other sites in Camden. Photo by Michael Bryant, Philadelphia Inquirer staff photographer

CAMDEN – The browsing began as soon as Tom Martin opened his one-hour Camden County Pop Up Library near the RiverLine’s Broadway stop.

“I’m one of his regulars,” said David Stanley, describing himself as mostly a reader of history, but glad to find a copy of ‘All the Light We Cannot See.’

Anthony Doerr’s Pulitzer Prize-winning novel was just one of the fresh titles Martin had arranged on a folding table in downtown Camden on a recent Sunday afternoon.

The 61-year-old Oaklyn resident has been giving away new and gently used books on the streets of the city for about a year, and finds no shortage of folks who haven’t lost their love of reading even if they have lost a job or a home.

“You can go down to the waterfront, kick back with a book, and spend the day enjoying yourself,” explained Eligio Rivera, of Camden, who was pleased to find a couple of recent thrillers by superstar novelist James Patterson.

Genre fiction, literary fiction, and non-fiction, along with children’s books and coffee-table volumes — all of them donated — are available for free, in hardcover or paperback, at the Pop Up Library.

“It’s fascinating,” said Martin, an avid reader and former stockbroker who grew up in Cherry Hill and works as a headhunter.

He started regularly distributing free books at the RiverLine stop, Cathedral Kitchen, which feeds the homeless and trains them in the culinary arts; New Visions, a day shelter for the homeless; Volunteers of America Delaware Valley facilities; the city’s Salvation Army Kroc Center; elementary schools; and other sites in January 2017.

“I knew right away this thing was going to work,” Martin said as folks walked up to take a look at the library’s latest offerings. “People took to it immediately. There’s a thirst for books.”

Perhaps 100 men, women and children regularly gather in the gravel parking area between the CVS store and the RiverLine on Sunday to wait for the regular mid-day meal provided by volunteers from the United Methodist Church of Turnersville.

Other churches and organizations, such as Friends of Fairview, distribute clothing or provide assistance to needy people every Sunday at the parking area. Many groups or individuals have done similar work, with little recognition and less fanfare, for years.

“There’s so much good stuff going on under the radar in Camden,” Martin noted, in between schmoozing with repeat visitors. “It’s very cool. And it’s so much fun talking to people about books.”

Martin’s  Pop Up Library effort obtains books from local booksellers and distributors, as well as from private donors. It’s a spin-off of a program organized by the Rev. Cherese Evans, pastor of the Magnolia United Methodist and the Pine Hill Memorial United Methodist churches, as part of her denomination’s regional anti-poverty project.

“We bring books to where libraries don’t go – to 20 different places and spaces, mostly in Camden County, where we pair up with food pantries and [other] programs,” Evans said. “We’ve distributed about 2,000 books so far.”

Scott Hartman’s online book business, Hartman-Books.com, of Collingswood has provided Martin with about 5,000 volumes to give away. “You’re not just giving someone a few ounces of paper and glue,” he said. “You’re giving them the ability to change their life.”

Said Julie Beddingfield, a Pop Up Library supporter and the owner of Inkwood Books in Haddonfield: “Imagine what life would be like if you never had” a book.

I try to imagine such a thing and can’t. The tactile, intellectual and even spiritual pleasures of settling down with and being transported by a good book are incomparable, and there really are no words describe what it would be like to never share in that joy.

“People want to read, regardless of their circumstances,” said Beddingfield. Last fall, she connected Martin with a publishing event that provided him with advance copies to distribute through the library.

Skeptics might see minimal value in such charity when so many people in the heart of Camden regularly line up for free meals. And what if folks accept a book and then sell it to get money for something less…edifying?

“I’ve given that a bunch of thought. I used to get nervous if someone was taking lots of books, but now, I just offer them a bag,” says Martin.

“What if they do want to read them all? What if they’re trying to build a little home library? I don’t think [re-sales] happen that much.”

Angela Boatright, a retired clergywoman who lives downtown and regularly pitches in at the Pop Up Library, sees books as tools with which people can improve their lives.

“Reading uses your imagination and exercises your brain,” she said. “It keeps you sharp.”

Turns out that providing people with books also can be a learning experience, said Martin.

“Some people who seem like they wouldn’t be readers walk over and the next minute they’re swapping ideas about books with someone else,” he said. “Other people who stop by tell me they learned to read while they were incarcerated.”

Jobless, homeless, addicted, mentally ill, hungry – or just hungry for something to read – people he meets on the street prove that “you can’t judge whether people read or not by their appearance,” Martin said. “You can’t judge a book by its cover.”

This story originally appeared in The Philadelphia Inquirer / Philly Daily News and Philly.com