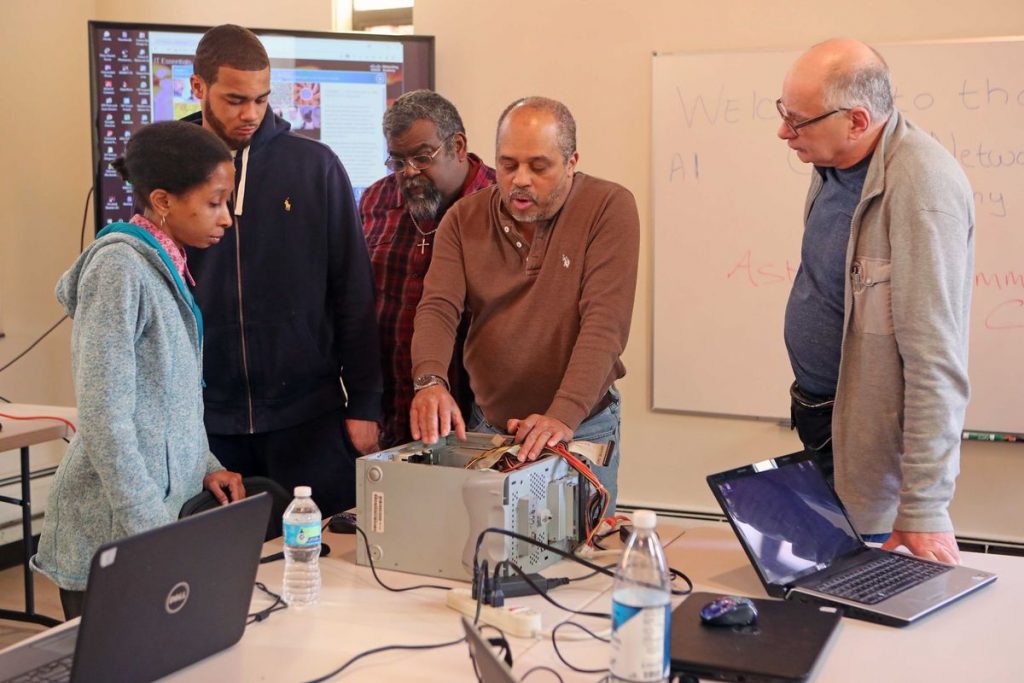 Course instructor AL Maddox, center, of Pleasantville, shows Atlantic City residents Chez Crisden, 41, Keion Marshall, 23, Keith Harris, 60, and Henry Porvaznik, 55, how to work on a computer at Asbury UMC. The church is hosting a pilot program to train residents in information technology systems so they can apply for entry-level IT jobs. Photo by Craig Matthews, Press of Atlantic City Staff Photographer

ATLANTIC CITY — Inside a back room of Asbury United Methodist Church on Thursday, five people gathered for the second time this week. Instead of biblical lessons, the group was getting a primer on the basics of a computer.

The students, of varying ages and backgrounds, were all there for the same reason: opportunity.

“This came right at the right time,” said Henry Porvaznik, 55, of Atlantic City. “I need to know this stuff for my job, and I wouldn’t have been able to afford it otherwise.”

This week, Asbury United Methodist Church began a pilot program to offer Cisco-certified training to area residents as a way to provide career training outside of a typical education setting.

Keith Harris, 60, of Atlantic City, received a degree in computer science in the 1980s. He said he wanted to support his church and refresh his computer knowledge.

“I wanted to bring my skills up to par,” Harris said.

The IT Essentials course, which meets twice a week at the church, is open to anyone 18 or older. The students learn the basics of information technology and can receive certification so they can apply for entry-level IT jobs.

The church received grants from the United Methodist Church of Greater New Jersey and the Stroser Foundation to implement the academy. The Rev. William Williams said the course is the same one offered at community colleges but, at $250, it is affordable for many more people.

Williams said the idea for the program started five years ago when the church decided it wanted to help out the schools in an innovative way.

Atlantic City and the surrounding region have been struggling with high unemployment since the latest recession. Recognizing that, and noting the biggest employer outside of the casinos is the William J. Hughes Technical Center in Egg Harbor Township, Williams said, the church wanted to offer programs that prepare the community for careers in science, technology, engineering and math.

“We understand in the African-American community that a lot of our students suffered in proficiency in math and science,” Williams said. “I think we can do a lot better in how we prepare our students.”

Williams said his previous work in Nebraska introduced him to the Cisco Networking Academy and he was able to make a connection with the local Cisco support center, the Camden Dream Center.

“We onboard new academies, which are in traditional and nontraditional educational centers,” said Dream Center Director Keith Davis.

Davis said they are now seeing more requests for training at nontraditional academies, like the one at Asbury UMC, because of the lack of educational funding.

“Tax bases have shifted and resources have diminished, resulting in community organizations stepping up to the plate to address workforce needs and training,” Davis said. “That’s what’s happening across the country now.”

Davis said the Cisco Networking Academy is the world’s largest classroom for IT training. The academy is offered through the technology conglomerate’s social responsibility arm.

He said students who go through the academy have the opportunity to get jobs that could net them six-figure salaries.

“This is serious stuff,” Davis said.

The community supports Williams and the church’s initiative.

“Pastor William Williams has been an integral part of this community since he’s been at Asbury,” said Atlantic City Council President Mary Small, 2nd Ward representative. “This program will be a great asset to residents, as a whole, trying to get training outside a typical school and education setting.”

Williams said churches can always do more to play a bigger role in educating the community, including supporting existing after-school programs and members volunteering in local schools.

“We need to do a better job of supporting our schools,” he said. “Education is a form of justice.”

This article originally appeared in The Press of Atlantic City