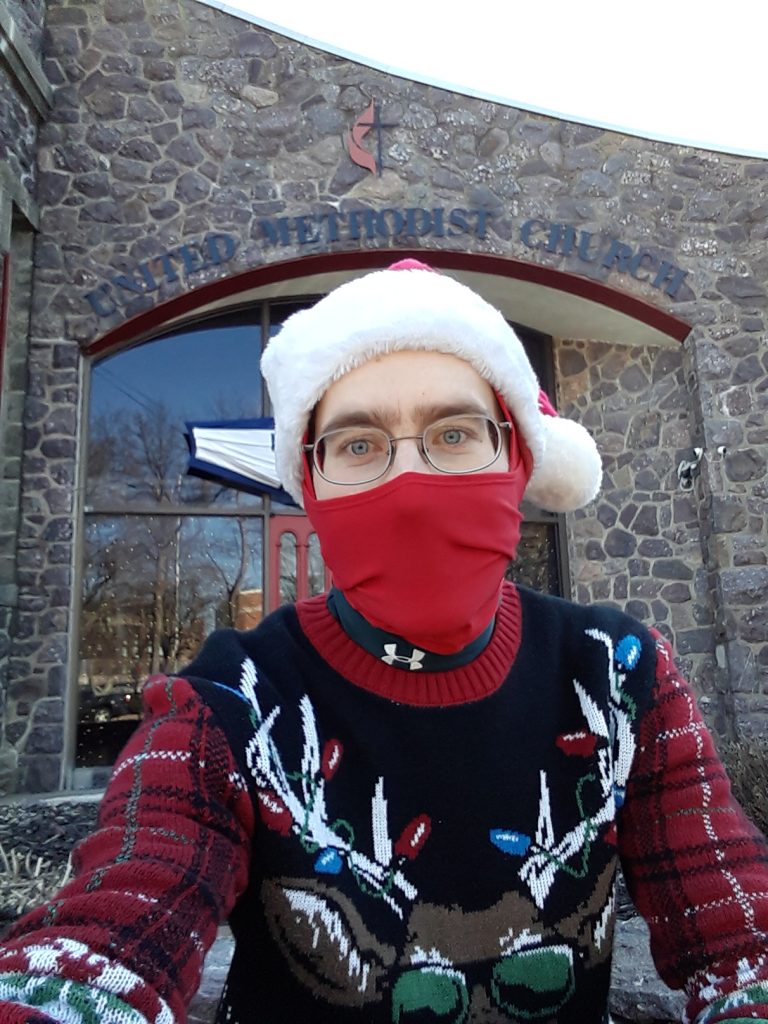 Running 13 Miles in an Unlucky Year to Make Miracles

He would have called himself the Running Reverend, but alas, that name was already taken. So, Rev. Donald Kirschner decided on “Cross Country Clergy Initiative,” got on his running shoes, a Santa hat and an ugly Christmas sweater and hit the road.

And then he almost sprained his ankle.

But the 28-year-old who had never run more than 60 miles in one week got back up and started to run, this time with one of his congregants by his side.

“After 13 unlucky days of 13 mile runs in 13 different towns and 13 different types of pasta, this cross-country clergy ran a total of 175.31 miles with a collective time of 33 hours and 33 minutes (or, fittingly, 2013 total minutes). And all to raise money for Greater New Jersey’s Miracles Everywhere Campaign!” said Kirschner who has been the pastor at Boonton and Montville UMCs since 2018.

“But even in the midst of an unlucky year, and at the start of a new one, we believe miracles are everywhere,” said Kirschner.

He ran through towns mostly throughout the Skylands District from Morristown and Randolph to Butler and Rockaway, never mapping out his route before leaving. Each day he ate a different type of pasta to commemorate the day of running.

“Kind of like COVID, running is symbolic. We don’t know where we’re heading,” said Kirschner. Joining him on the 10th day was Rev. Willard Joseph II from Knowlton UMC in Columbia, but all other times he ran solo.

“I love running as an exploration,” said Kirschner who often donned a costume while running. He was Buddy the Elf on the days he ran in the towns of the churches he serves. On day eight, he carried a container of mustard seeds. Serving as a sign of God being able to move mountains and do the miraculous with even a small amount of faith, Kirschner scattered seeds at every mile marker along the way.

Each day he also shared a story on social media that highlighted some aspect of the work and impact of the Miracles Everywhere Campaign, “whether it be through hurricane relief, pandemic relief, creating hope centers, investing in the next generation of disciples, or developing pastoral leaders in Tanzania.”

The obvious question is why running. For Kirschner, that’s an easy answer. Running and writing are two of his biggest passions. While running a trail marathon last September, this idea hit him.

“I always have something to work toward,” said Kirschner who recalled needing to get on a strict regimen in the summer of 2019 when he was in a bad mental state.

“I needed both spiritual and physical at that point,” said Kirschner who grew up attending a Baptist church in southern California. His wife, Nina, is a pastor at a Presbyterian church. In October he started training for ultramarathons.

In the coming months, the pastor who dubs himself as “the idea guy” is planning to pick a different organization to help. In February, proceeds from his running will likely support opioid awareness, and in May, Relay for Life.

This September he and his congregations are also hoping to launch a new ministry/outreach called “Hungry to Whole,” which is inspired by John Wesley’s Holy Clubs and The Daniel Plan they discussed last year. This book explores an approach to achieving a healthy lifestyle by optimizing the five key essentials of faith, food, fitness, focus, and friends. The “Wholly Club” gathering will be grounded in Psalm 107:9: “God satisfies the thirsty and fills the hungry with good things.”

Kirschner added, “This is an outreach that will not only seek to fill people spiritually but integrate their whole selves in a way that honors God and helps others. For our goal is to nurture body, mind and spirit wellness within the context of a faith community that extends that message of healthy and wholistic living beyond the walls of the church.”

Kirschner said he hopes his running and healthy living will make an impact on others and inspire some to do the same.

“There’s still plenty of work to be done.”