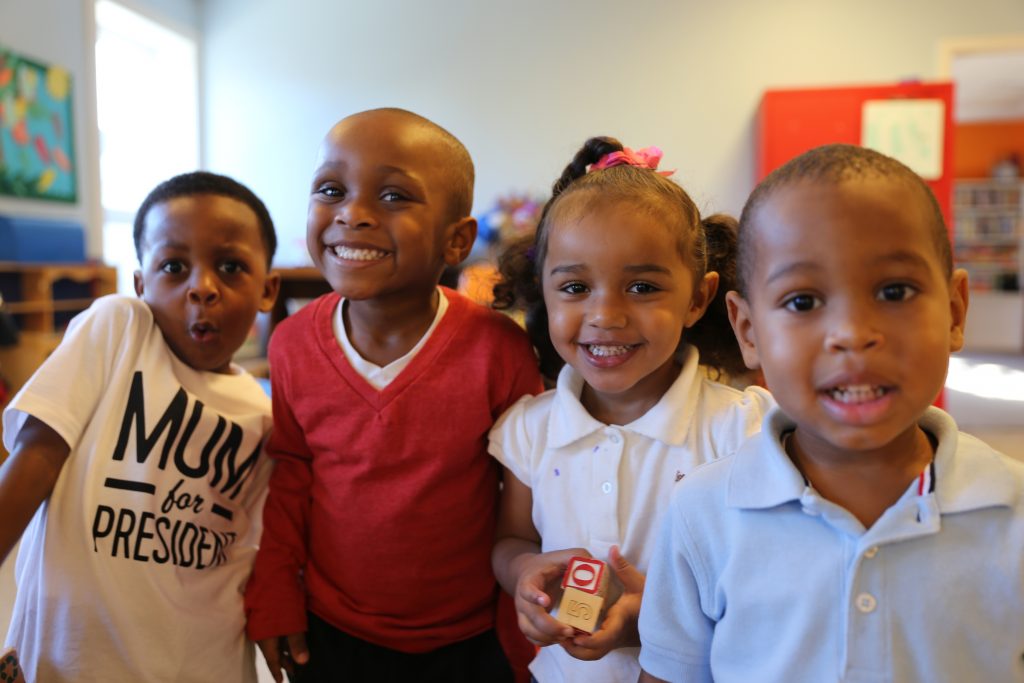 A group of happy, smiling children pose for their close-up at Paterson's Camp YDP. Photo by Josh Kinney

PATERSON – Small children scurried about the playground across from the CAMP YDP building, crunching fall leaves beneath their shoes and taking rides down the sliding board. The hub of activity bustled with laughs, energy and smiles.

With enrollment up and resources expanding, the Paterson youth program founded by a Methodist minister in 1959 has undergone a progressive transformation, rapidly bouncing back from decline.

The determination of local Paterson community members coupled with a partnership with Greater New Jersey that included a $70,000 investment, the after-school, preschool and summer day camp service was brought back from the brink of closure. Now rejuvenated and flourishing, CAMP YDP has benefited from a facilities upgrade by GNJ volunteers.

“This new partnership is a credit to the hard work and perseverance of our dedicated staff members,” said CAMP YDP board member Patricia Francis. “Because of them, we can continue to go forward.”

Over 60 years ago, the late Rev. Maxwell Tow along with local Paterson pastors, laity and volunteers made it their mission to become active in the community, reaching people and families in need. Camp YDP was birthed out of that movement to help and continues to remain steadfast in its mission to provide high-quality, affordable childcare to the children and families of Paterson while cultivating achievement through academic, social, and emotional empowerment.

Michelle Hughes has been a teacher at Camp YDP for three years and enjoys arts and crafts with the children.

“Camp is just so awesome,” she exclaimed. “It’s very important that we’re here catering to our community.” A vibrant and animated Hughes joined the children at a tiny table, carefully watching them create art. “We want to encourage our children to become lifelong learners, critical thinkers and productive members of society,” she said.

Inside the building on the corner of North 1st Street, freshly painted bright colored walls and a mural exude a warm, inviting space for both children and parents. This summer, Camp YDP celebrated its gains with a “relaunch carnival” block party with music, miniature golf, a bounce house, food, and book giveaways. With a new curriculum and staff, Camp YDP now offers field trips, after school enrichment programs, photography classes, a girl’s empowerment club, tech, chess and book clubs, an elocution class and a time of devotion with respect to all faiths. The new curriculum is integrated across the spectrum of ages, modified and tailored to each age group under the unity of an overarching theme. According to Camp YDP’s philosophy, the organization believes in the value and uniqueness of each child served.

“The kids can tell our staff is a family,” said Susan Phillips, Camp YDP Operations Manager. “They can see it and sense it, and it’s positive for them to be seeing that example of genuine community.” Phillips, a Paterson native and graduate of Seton Hall University, previously worked for the American Cancer Society in New York City, Habitat for Humanity, and AmeriCorps. Her life has come full-circle, returning to serve her hometown.

Phillips was moved by a recent back to school night at Camp YDP where the organization experienced its biggest turnout yet.

“My favorite part was listening to these parents say that before, their kids wouldn’t read or be social, but Camp YDP had changed them,” Phillips said. “Hearing that was just amazing.” For Phillips, the biggest shift has come within the last few months as she’s witnessed and been a part of relationship and trust building with neighborhood parents.

“Something we’re doing here is definitely working,” said Camp YDP Director Bria Pierre, who along with Phillips, tributes the organization’s growth to the help of GNJ as well as their various inclusive community events and activities. Additionally, word of mouth and Camp YDP’s vastly improved online presence has stimulated progress and interest.

“It’s really impactful,” Phillips said. “Teaching kids to give back and to live generously is so important.”

Plagued by rising crime and poverty, Paterson has endured significant challenges. However, the rise of Camp YDP offers children a hopeful future in the midst of tumultuous times. The nonprofit strives to foster innovation, teamwork, and diversity through open and productive communication that ensures students work at a pace unique to their needs. The organization plans to build a second playground on the grounds and to add a community garden which would provide fresh vegetables for neighborhood residents.

For more information about Camp Y.D.P and to find out how you and your congregation can participate, go to www.campydp.org