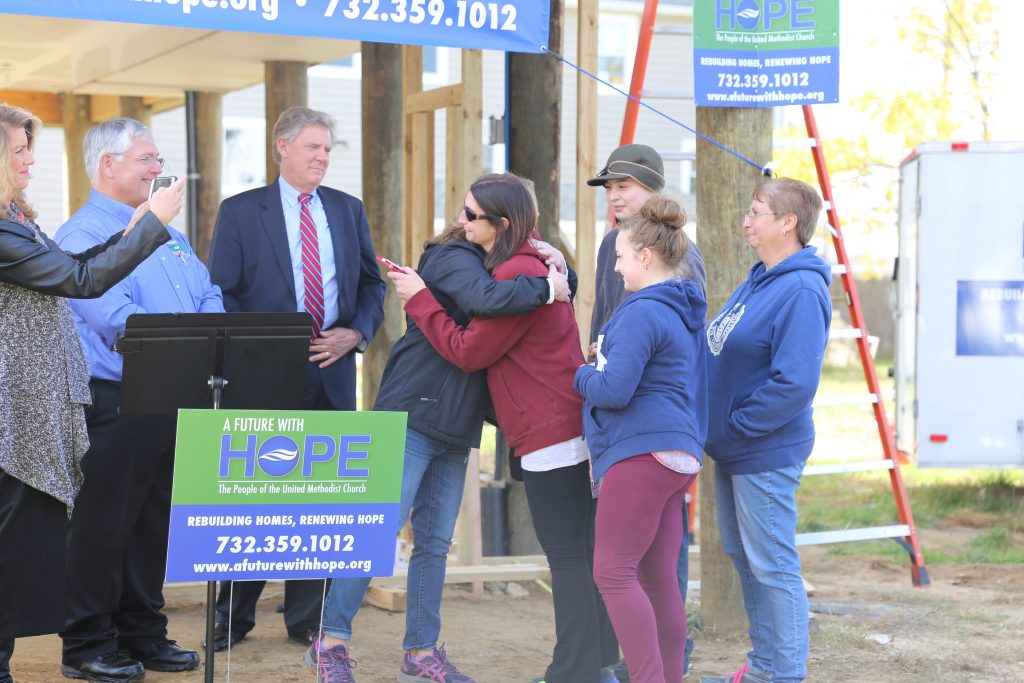 After 4 years of displacement, Jen Capraun sees the light of day celebrating her rebuilt home in Union Beach with A Future With Hope volunteers from Cranford and Haddonfield UMC's on Oct. 29, 2016. Photo by Josh Kinney

UNION BEACH – Through tear stained eyes, Bonnie Siegel watched as her friend of over 20 years stepped foot onto her Union Beach property four years to the day after Superstorm Sandy ravaged New Jersey and left her home in ruins. Jen Capraun, a mother of two, joined volunteers and staff from A Future With Hope on a tour of her new home being completed by A Future With Hope on Saturday, October 29.

“I don’t know anyone stronger than Jen,” Siegel said. “The grace of God is how she did it. I don’t know where she would be without A Future With Hope. Thank God someone stepped up.”

Capraun, who struggled with the loss of her father-in-law in the midst of her fight to get back home, never missed a day at her job as special education teacher.

“There’s nothing we wouldn’t do for Jen,” Siegel’s husband Larry added. “She needs all the help she can get, and we’re willing to do it.”

Union Beach Mayor Paul Smith and U.S. Congressman Frank Pallone gathered alongside A Future With Hope volunteers from Cranford and Haddonfield UMCs.  Mission teams from the congregations had been working on the Capraun home since the early morning.

“You guys are unbelievable,” said Pallone about the United Methodist Church. “Throughout the storm and after the storm, we saw you and we’re really appreciative of all that you do. I’m happy to be here because I want to stress the role of volunteerism and nonprofits like you.”

Monmouth County Freeholder Deputy Director Serena DiMaso was also present at the anniversary event.  “I’m a true believer that with everything bad something good grows out of it,” DiMaso said. “Look around; you are that good.”

Acknowledging that rebuilding is just one step in the recovery process, a special gift card was donated to the Capraun’s to help them refurbish their home with items lost in the storm.

“Four years after Sandy, the recovery effort has become complex for many homeowners,” said Bobbie Ridgely, Executive Director of A Future With Hope. “People are struggling with government resources, fraudulent contractors and delayed insurance payouts. Their options are narrowing. A Future With Hope and United Methodists are committed to being a place where they can turn for help. Today we get to help Jen and her family take a step closer to recovery.”

Thanks to good friends like the Siegel’s, Capraun didn’t bear her burdens alone.

“To us, it was just important that Jen could get up every day and be the strong person that she is,” said Mrs. Siegel. “What A Future With Hope has done is outstanding.”

Rev. Chris Heckert, a member of the Board of Trustees for A Future With Hope and pastor of Haddonfield UMC spoke at the event, highlighting the work that remains years later and the more than 4,000 families who have not recovered.

“While other recovery organizations have scaled back and closed up, we’re here to stay,” said Heckert, explaining that the good will and energy created in response to Sandy through the organization would live on to meet needs throughout New Jersey.

The Capraun home will be the 250th rebuilt by A Future With Hope with the help of more than 11,000 volunteers. To accomplish this feat, the organization has received support from The Robin Hood Foundation, The American Red Cross, The Hurricane Sandy New Jersey Relief Fund, The United Methodist Committee on Relief, as well as congregations, individuals and organizations from across the region. They work in partnership with other long-term recovery groups including The Affordable Housing Alliance, OCLTRG, SBP, The Episcopal Relief and Development and others.

A Future With Hope will continue its evolution living into its name by providing hope throughout New Jersey by means of Hope Centers that will build up communities and provide needed services.  Camp YDP, a preschool, aftercare program and summer camp in Paterson will be the first Hope Center and eight other opportunities have been identified to join the movement.

“We need to continue to lift each other up and move each other forward,” said DiMaso. “I hope this feeling of goodness and kindness never leaves us.”