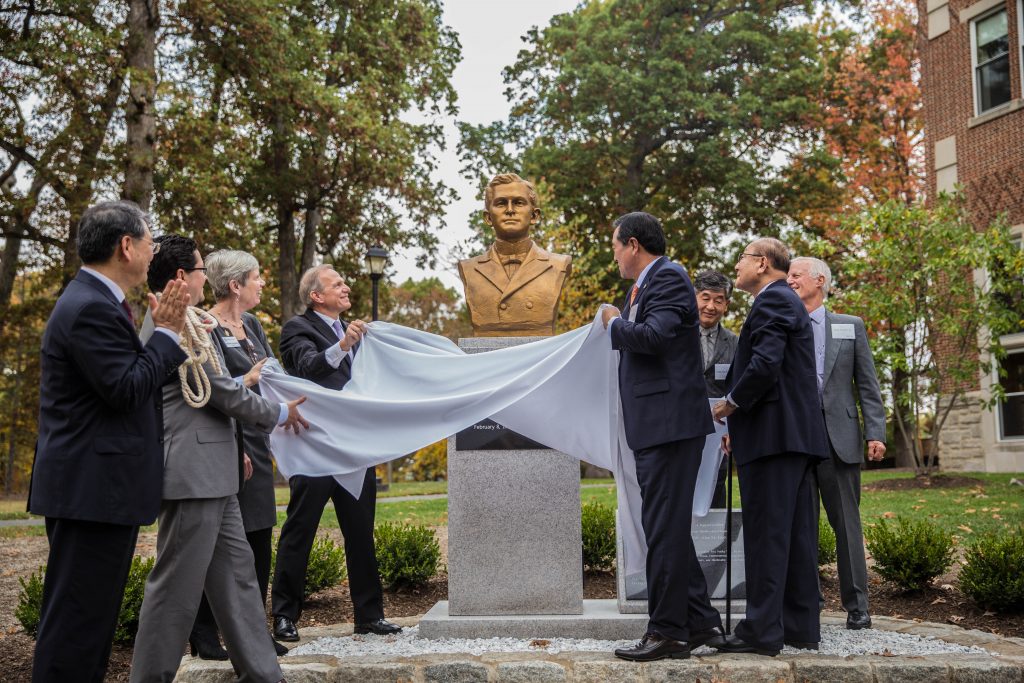 A bronze bust of Henry Appenzeller was dedicated on the campus of Drew Theological Seminary on Oct. 21. A Drew grad, Appenzeller established a United Methodist movement in Korea over 130 years ago. Photo by James Lee

Risk-taking ministry can transform the world. In 1885, a fire sparked inside the heart of 26-year-old Henry G. Appenzeller at the chapel of Drew Theological School’s Seminary Hall and ignited a willingness to step out in faith. The result was an entire country forever transformed.

Kneeling before the chapel’s altar, Appenzeller responded to his calling by making a commitment to bring the gospel to Korea, where he introduced and established a United Methodist movement. 130 years later, the very same room was packed with decedents of his Korean church plant who traveled across the globe to pay homage to his sacrifice through gratitude, commemoration and a special memorial.

On October 21, a bronze bust of Appenzeller was dedicated on the campus of Drew Theological School as a gift from the Chungdong First Methodist Church in Seoul, South Korea. Started in 1887 by Appenzeller, Chungdong remains vibrant as the country’s largest Methodist church, many of the country’s leaders including the first president having come through its doors. Appenzeller’s roots can be traced back to Greater New Jersey and Drew Theological School, where he received his education, as well as Green Village UMC where he served his first pastoral appointment.

“As a sculptor, I have made many artworks, but there is something special about this one,” said Chungdong Elder, Changgon Kim, who sculpted the bust of Appenzeller. “For the people who will see and appreciate this monument, I hope they will long remember the love of God and inherit Rev. Appenzeller’s devotion to missions.”

“For the people of Chungdong and Methodists in Korea, it’s as if Appenzeller came to Korea, gave himself up, and now 130 years later, we’re expressing our deep gratitude by bringing him back,” said Sehyoung Lee, Chungdong’s pastor of English Ministry.

A pioneer spirit, Appenzeller arrived in a Korea shrouded with uncertainty, but with trust in God. He founded a church, started a school, assisted in medical missions, and focused on Bible translation.

“Appenzeller was a great model of a transformational leader,” said Lee. “We hope GNJ will continue to produce leaders like him to transform the world.”

Rain caused the event’s liturgical opening service to be held fittingly inside the chapel Appenzeller was sent forth from. However, the weather cleared, and the crowd gathered outside around the veiled bust and joined Bishop Schol in prayer.

“The face frames the soul,” said Schol, after the statue was unveiled. “This pathway, this ground will forever be framed by the face of Henry Appenzeller.” Schol stated that he hoped the monument would serve to inspire others to leave the familiar for the unfamiliar to serve God with the courage to say, “Here I am, Lord.” Immediately following Schol’s benediction, a sudden burst of sunlight lit the statue as if on cue from the divine. Participants gasped with awe and applause at the powerfully moving moment, joining to sing “How Great Thou Art” in Korean.

“At that moment I know we all felt a thrilling and enormous power of the Holy Spirit,” Lee said. “You know the story where Jesus heals ten, and only one comes back to express gratitude? Well, this is our small gift of thanks; a thanks for giving us the church and transforming our country.”