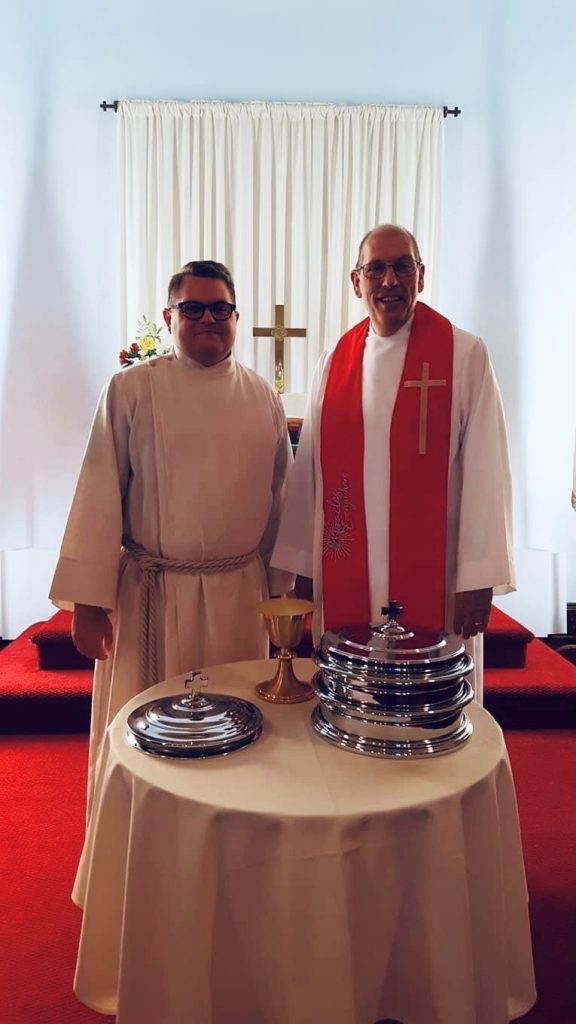 He experienced his first pull toward ministry during his childhood years growing up in Mullica Hill, NJ. It was then that Rev. Tim Conaway listened to numerous conversations around his family dinner table; discussions that were a mix of stories, jokes, talk, philosophical debate and theology. His grandfather, Rev. William Thielking was the pastor of the First UMC in Glassboro and his father, Rev. Glenn Conaway, a pastor as well, having served during his ministry at Fairton UMC in Fairfield, First UMC Moorestown in Moorestown and Trinity UMC Mullica Hill in Mullica Hill.

“I had felt a tug toward ministry but kept it at bay or ran away from the idea. Growing up I did not want to be a minister. That was my dad’s and my grandfather’s profession,” he said.

So he made the careful decision to pursue other opportunities that were not within the ministerial realm. He attended Asbury University in Wilmore, KY, where his grandfather, his father and his sister all had graduated previously. After his graduation, he worked as an intern at WHYY in Philadelphia and then as the media director at Trinity UMC in Mullica Hill, a position he had for seven years until he became a pastor.

In the winter of 2018, he worked A/V for a pastor’s retreat on storytelling. He had helped lead a story at an event and during that event, Brian Roberts, district superintendent of the Cape Atlantic District, approached him and said, “I see call in you, Tim. I believe God is calling you.”

“I was taken aback. I had been running from this very thing my whole life. I know my family felt it, and even I did, but fought it every time,” he added. “Brian and I met and talked, and I finally allowed myself to be open to the idea and doors opened wide. I went to local licensing school, was appointed to Hammonton, and a year later started seminary at Drew Theological School.”

Conaway has now been the pastor of First UMC of Hammonton for the past three years with this being his first appointment as a licensed local pastor.

Rev. Glenn Conaway grew up in the First UMC in Glassboro. He attended Asbury University as a History/Sociology Secondary Education major. However, he felt his calling to ministry at a summer camp between his junior and senior year of high school.

“The church became a big part of my life from the time I sang in the cherub choir at age six.

My mom made church a priority in her life for all three of her children. She worked mostly behind the scenes but was there to show us that faith and works go together,” he said. “For me it was choir, youth group, bell choir, mission projects, and going out to serve others. I think that is why during high school and college I worked at Pitman Manor, a Methodist retirement community. I enjoyed working with people, and they encouraged me to keep going in college and prayed for me and my coming ministry.”

After he graduated from college, Conaway attended Eastern Theological Seminary where he received an MDiv. While in seminary, he served as a student pastor at Fairton UMC. He then served at First UMC Moorestown, Trinity UMC Mullica Hill and is now district superintendent of the Delaware Bay District, Southern Region Leader, having just completed four years.

Both father and son agreed that their greatest joy as pastors has been sharing God’s love, grace and mercy with their communities.

“My family is so blessed to be part of the Hammonton community. Our congregation is so loving, caring and compassionate to not only my family but all who they work with and serve,” Rev. Tim Conaway said.

He added that working alongside his father at Trinity UMC had been a wonderful experience for both of them.

“He is an incredible pastor, teacher and leader as well as a father and grandfather. I loved being able to work creatively with him for those years at Trinity. Growing up, servant leadership was a part of everyday life. It is a lifestyle that I have continued to live out today,” he said.

Rev. Glenn Conaway echoed his son’s sentiments and added that his joy of serving God has been walking alongside people, in whatever their journey of faith may be.

“There is the joy of watching some commit their lives to Christ for the very first time, to see others in a disciple class get excited about hearing God’s Word, and exploring how it pertains to their lives. And there are those who have spent a lifetime walking with God and who have challenged me to rethink, relook and rediscover what it means to be a pastor in the valleys and the mountaintops of life,” he said.

“This past year has been a valley where I often felt like many clergy wandering in circles in this desert, unsure where we will go or be as the church. Yet, it has been in this year that I have found strength in my personal prayer time and devotions.”

Rev. Tim Conaway said that as he reflects upon his upbringing, he believes that God has and is using all his life experiences for this moment.

“My grandfather, dad and other family members’ storytelling, sharing jokes, debating and having theological and philosophical conversations as well as my college education, working on church staff and missions have all shaped me for this time. I have never been more filled with joy and humbled to be where I am,” he said.

Rev. Glenn Conaway continued that what inspires him the most every day in life is his belief in hope.

“I read about hope in Romans,” he said. “But more than that, I see the hope that Christ brings to people’s lives and realize that at any given moment or day, Christ is not only at work but breaks through with hope.”