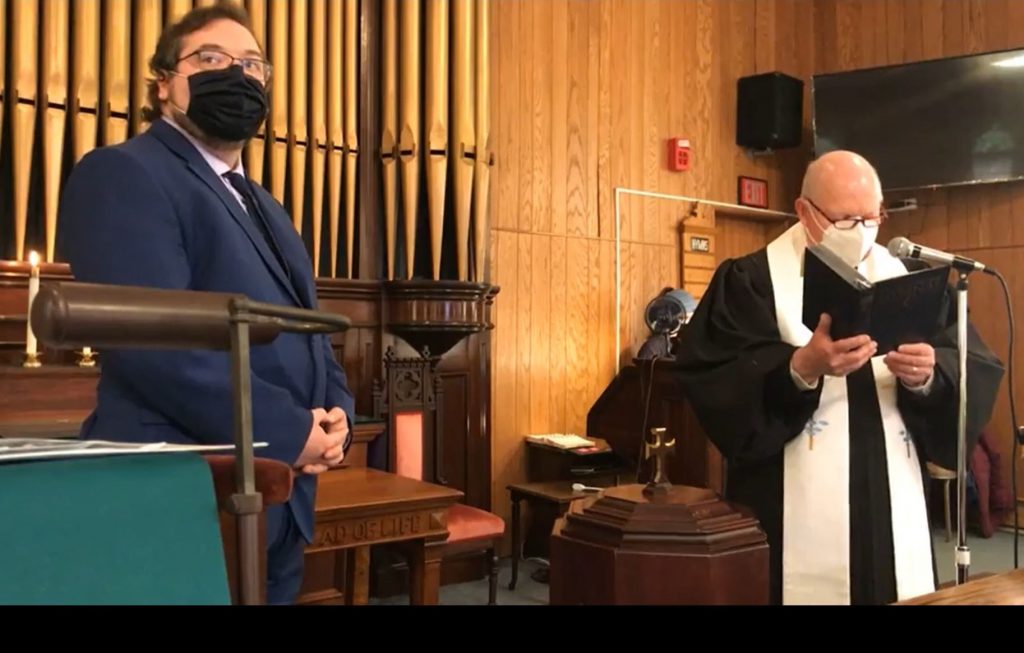 On January 31, 2021, James Griffin was baptized, not cradled in the arms of his parent but rather standing tall as an adult who had grown up in what he called a “half-hearted” Unitarian family but was now ready wholeheartedly to become a disciple of Christ at Sussex UMC.

Having gone for many years with no religious affiliation, Griffin knew it was time to find a spiritual home. After the beginning of the pandemic, he began a time of soul-searching and wanted to explore the Christian faith more deeply.

“I was not raised as a regular church goer. I’m middle aged now and had been meaning to join a church for several years but never followed through,” said Griffin, who is a machinist at Thor Labs in Newton.

“During the pandemic and lockdown, many congregations hustled to provide services remotely. This allowed me the freedom to cautiously investigate several options. My grandparents on both sides were Methodist, so that’s where I focused my search.”

With research in hand, he contacted the church office at Sussex UMC to ask what would be involved in being baptized.

“I talked with him by phone a number of times, to answer his questions and talk about John Wesley, Wesleyan theology, the United Methodist commitment to mercy and justice as well as devotion and our congregation’s history of compassion and service in the community,” said Rev. Dan Gepford.

“We talked about baptism and the meaning of membership and about the commitments professing members make. James raised excellent questions, which I did my best to answer, and I enjoyed our conversations a lot,” added Gepford who is retiring from his role as a pastor this year.

When asked what led him specifically to the church in northwestern New Jersey, Griffin said it was Rev. Gepford’s voice.

“Dan Gepford’s voice during a sermon let me hear, really hear and understand, the meaning of the Words in a way that I couldn’t understand when I read them on a page.”

A date was arranged when he and his girlfriend could come to the church during Sussex UMC’s livestream worship service, when the church council president, organist and Gepford’s wife could also be present in the sanctuary, wearing masks and social distancing.

The day was a momentous one for the pastor and congregation at Sussex UMC as evidenced by the many celebratory comments on Facebook during the livestream service. Despite the empty pews, the enthusiasm was felt that day in the sanctuary.

“I think everyone found special joy that day in welcoming James and singing our traditional baptism theme song, the hymn ‘I Was There to Hear Your Borning Cry,’” said Gepford. “Since then, James has been eager to participate in our small group gatherings and get to know the congregation. I am really happy and inspired that he has chosen to be part of our church family.”

Griffin said he’s looking forward to meeting his neighbors and getting involved in the local community. Currently, he’s doing his part to plan the church’s annual rummage sale scheduled for June 5.

Gepford’s journey will also take a turn this year when he retires for the second time this July. Before becoming a pastor, Gepford was a lawyer for AT&T for 28 years. Despite a constant nudging from God all throughout college, Gepford said, he pursued a secular career after ending up as only the runner-up for a Rockefeller Scholarship, which would have enabled him to pursue a career in ministry.

“I saw that as a sign,” said Gepford. In fact, throughout his life he paid attention to those signs. In 2001 after 9/11 shook not only the world but also Gepford’s life, he listened to his wife and as he puts it, “the constant nagging from Jesus,” and enrolled in seminary full time.

Today, as he looks toward retirement when he hopes to spend more time with family and travel, Gepford said he has no regrets.

Here is link to the video recording of the livestreamed service.