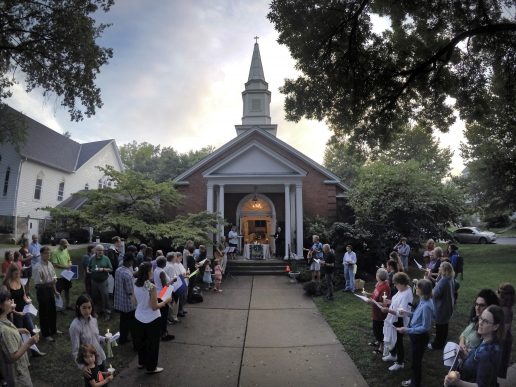 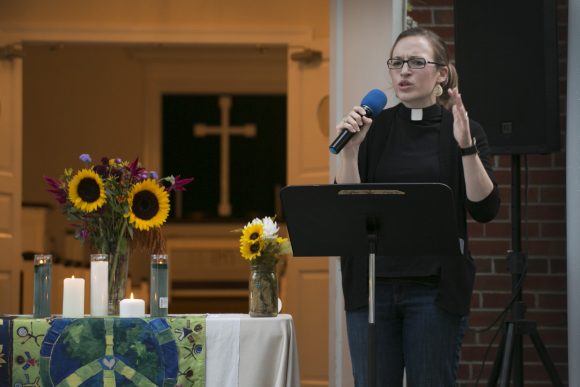 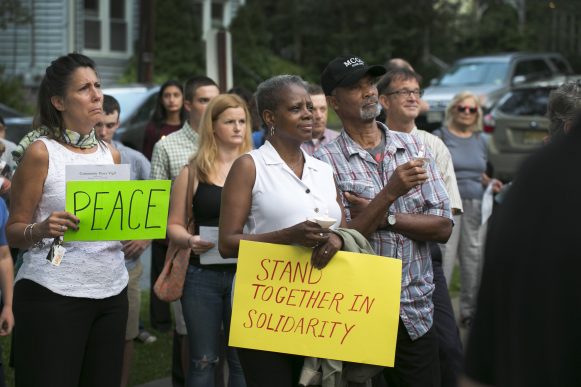 Church and community members gather at Hopewell UMC for a peace vigil in the wake of the violence in Charlottesville, VA. Photo by Michael Mancuso

HOPEWELL – In the wake of violence in Charlottesville, Hopewell UMC lived up to its name and became a well of hope for their community. Churchgoers, neighbors, friends, and community and religious leaders gathered on the evening of August 15 for a solidarity peace vigil in the midst of national division, strife, hatred, and conflict.

Candles were lit and singing filled the church lawn as gatherers remembered lives lost and envisioned a hope for peace and acceptance.

Pastor Kate Hillis said, “As a community of faith, we grieve together. All of us, black and white, are called to see one another as image bearers of the Divine in this world.”

Other local religious leaders spoke about the importance of focusing on love and standing against injustices.

Hillis went on to quote scripture. “There is no division between Jew or non-Jew, slave and freed, male and female,” she said. “Among us, you are all equal.”

Hillis moved many to tears as she lit her candle from one burning on a makeshift altar situated on the church steps. The flame was then passed among the gatherers.

“It grieves my heart to say that this violence against our fellow human beings is not an isolated incident,” said Hillis. “It is also not an incident that we can afford to look away from because it didn’t happen in our community – this time. Many egregious and violent acts of hate have often been done in the name of God, and as a pastor in this town, I need you to know that I’m not okay with it. And I will not be silent on issues of injustice.”

Hopewell Borough Mayor Paul Anzano expressed gratitude for designating the borough as a Sanctuary City. Some stepped up to the microphone and shared their stories, including Deacon John Buck of the Second Calvary Baptist Church who proudly described Hopewell as a “small town with a big heart.” Both Buck and Anzano expressed gratitude to the community for attending the vigil. The crowd walked around the block singing songs of peace before concluding the event.

“From a ‘son’ of Hopewell now living and resisting in Charlottesville, I’m proud of and grateful for your response to the weekend’s horrors here,” commented E. Anderson, addressing the town on the community blog MercerMe.com. “Thank you, Hopewell, for the rock-solid foundation you fostered in me as a young person 30 years ago, and for somehow supporting me still even today.”