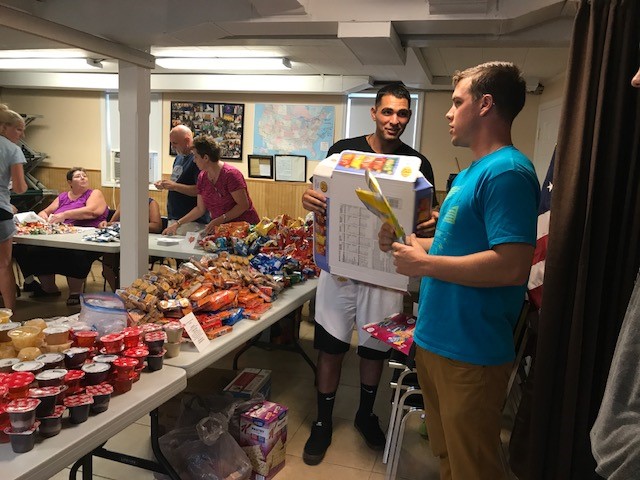 PLEASANTVILLE – Handwritten notes of encouragement, resource information, snacks, drinks and toiletries filled into clean Ziploc bags, can change lives forever, as those who assembled these “blessing bags” at Bethany St. John’s UMC recently learned. Such a simple gesture can mean a world of difference, particularly to those who are struggling with homelessness and addiction. Mike McGaffney, who helped organize the recent bag event at the Pleasantville church with Pastor Carol Hutchinson, knows this story all too well, as he has walked in those shoes.

“I have had several overdoses, been on life support, and in a coma for 31 days. I have been to several rehabs, intensive outpatient programs, jails and state prison. I was addicted to heroin and cocaine. But I got clean on December 12, 2012,” he said.

McGaffney, along with his friend Susan Howell, who also became clean on January 14, 2014, were friends and roommates in the worst of their addiction and together battled homelessness, living on the streets. After getting clean, “we talked about giving back and Susan helped bring ‘Angels in Motion’ to Atlantic City in early 2016 and I joined her,” said McGaffney. “We go to the streets every day giving out blessing bags, clothing, water, love and encouragement.”

To date, the Angels in Motion (AIM) blessing bags program has according to McGaffney, “gotten over 1,000 people off the streets and into treatment.”

“We filled 425 bags, meaning 425 people’s lives will be touched with the blessing bags event at Bethany St. John’s UMC,” he said. The event was attended by the congregation and AIM volunteers from South Jersey. McGaffney gathered donations and the bags were filled by attendees. Notes of encouragement were written by children and their parents, along with resource lists that contain all New Jersey phone numbers for substance abuse, mental health and homeless alliance housing. Included also were Medicare/Medicaid, county and state funding and programs that scholarship those needing assistance.

McGaffney, who is the New Jersey Chapter consultant for AIM, added that he has been involved with the organization since January 2016.

“AIM is an organization that is changing the way the homeless and addicted are treated. We help them get ID’s, get them into detox/treatment, support them in their recovery, go to court dates with them and encourage them throughout the process,” he said.

Angels in Motion started with one woman’s efforts to rescue her child from the disease of addiction. While searching the streets of Kensington, a neighborhood in North Philadelphia, for her son, Carol Rostucher saw that many other children and loved ones were suffering and lost as well. She opened her heart and spread the love on the streets by providing “blessing bags” which contain food, snacks, clothing, hygiene products and resource information to obtain help when they are ready. AIM was formed in mid-February of 2015.

“I would love to see other churches get involved by hosting blessing bag parties,” said McGaffney. “Susan and I were both homeless on the streets for years and no one helped us. We are trying to end the stigma. The first thing we do when we meet them is give them a hug! Hugs mean so much when you are in darkness and feel alone. We listen to them. We tell them we are here for them. Our hearts soar when they call, we pick them up and immediately begin the process of getting them help. The initial reactions we get is of suspicion or disbelief. Over time we build trust and love and they talk to us, some eventually reaching out to receive help from us.” He continued, “In the current opiate epidemic, we have lost more than we can count, but we are also getting some wins. There is no better feeling than reuniting mothers with children, parents with their sons and daughters, and helping families through the healing process.”

For more information about Angels in Motion visit their website at www.aimangelsinmotion.org