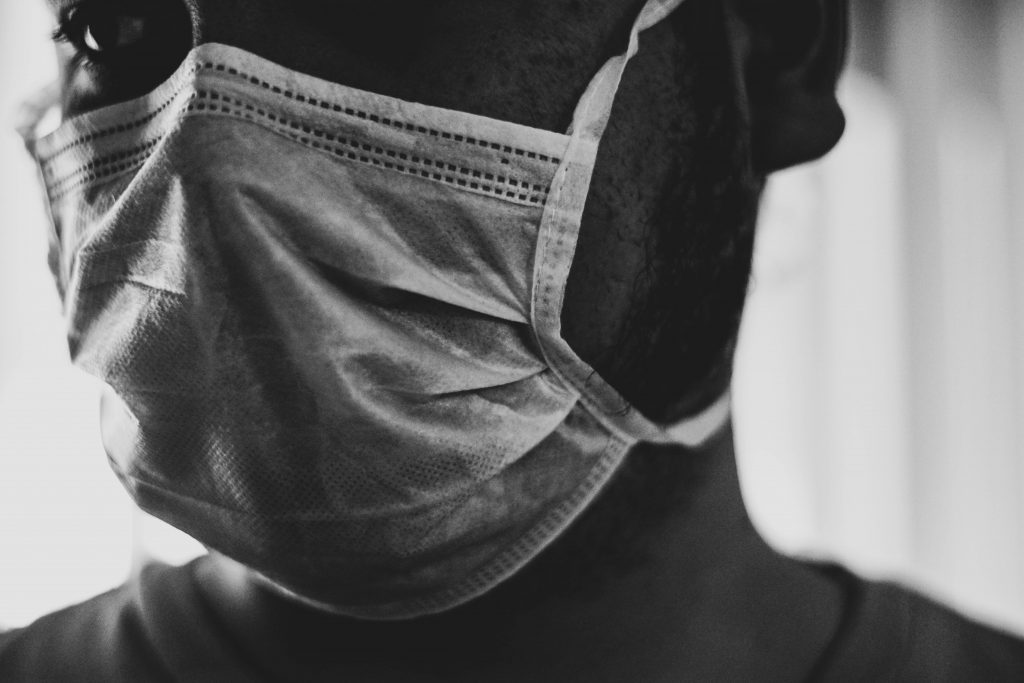 “For I am convinced that neither death, nor life, nor angels, nor rulers, nor things present, nor things to come, nor powers, nor height, nor depth, nor anything else in all creation, will be able to separate us from the love of God in Christ Jesus our Lord.” (Romans 8:38-39 NRSV).

Clergy and laity working in the Greater New Jersey Conference have always been committed to working on the front lines of helping others, but when the COVID-19 health crisis grabbed hold of our daily lives, the need for more nurses, doctors and other healthcare workers was clear. Less evident—behind the front lines–was the growing need to care for the mental health of these healthcare workers, the patients they treat and those already receiving neurological care.

For Susan Victor, protecting mental health is her priority, but the way she does it has changed for the moment and possibly for the future. Commissioned by Princeton UMC last year to work in Trenton at The Maker’s Place, Victor has also served for the past 15 years as the Director of Counseling at Womanspace, a Trenton-area non-profit that works with women, men and families impacted by domestic and sexual violence.

“It has completely shifted. We normally work face to face, but now we have had to rethink what safety looks like,” said Victor who added that she now sends encrypted messages to her clients to protect their safety and has brief check-in calls with them to make sure they are doing well. “I have to be aware of who else might be listening in on these calls.”

Unlike many stay-at-home workers, Victor is not able to work via Zoom with her clients, only internally with staff. Although Zoom is compliant to all HIPAA rules, it does not comply with the Violence Against Women Act (VAWA), a law originally enacted in 1994 that changed the landscape of violence against women by improving criminal justice and community-based responses. Following expiration of the 1994 law, VAWA was reauthorized last April to include provisions protecting transgender victims and banning individuals convicted of domestic abuse from purchasing firearms.

But at its core, Victor said, her practice has not changed, and for that among many things she is thankful. “You have to set boundaries. It’s all about empowerment counseling. My job is to journey with them, recognizing that they know their lives best. My job is not to carry them.”

Victor and her team work in close partnership with another local organization called PEI Kids that works with children who have been sexually abused. Together, they maximize their efforts for the greater good in their community.

Each day the mother of three adult sons continues to impart what she learned while studying at the University of Pennsylvania toward a Master of Social Work, which she thought complemented her theological training at Union Biblical Seminary in India and Princeton Theological Seminary.

“Social work looks at the person in their own environment. I think the link between social work and ministry is wonderful.”

Victor, an ordained deacon, also serves on the Greater New Jersey Annual Conference Board of Ordained Ministry and is a candidacy mentor on the district level. She recalled how grateful she was for her mentor, Rev. Steven Faller, while she was studying in seminary.

“He was my rock. Now I have my foot in both worlds,” said Victor who said she loves how her secular and non-secular jobs complement each other. She was proud to note that Womanspace is the only agency of its kind that has a chaplain.

Victor admitted that her journey was a circuitous one, from growing up in India as a self-proclaimed independent “atypical Christian Indian woman” and then traveling to Japan and then the United States. She recalled being part of a youth group in India and how they started “King’s Messengers,” a group that embraced the gospel through discussion and singing songs. Those bonds she made many years ago are still intact today and have been handed down to the next generation.

But it was nine short months in a tribal village in India while doing her theological training there that shaped Victor into the person she is today.

“I learned what it’s like to be completely dependent on God” while traveling to get water from a well, working with only limited electricity and being many miles from any hospital. “This experience shaped the rest of my journey.

Because of it, I’ve had opportunities I never thought I would have.”

Keeping his patients safe and healthy
Like Victor, Gary Frieze knows all too well the balance that’s needed and the beauty that can be achieved while blending a secular job with a non-secular one. An ordained deacon who serves at Grace UMC in Kearny, Frieze has been a practicing pharmacist for the past four decades. For 18 of those he has been responsible for dosing at a methadone clinic that treats people with opioid, addictions called Inter County Council on Drug & Alcohol Abuse (ICCDAA) in Kearny.

“Things have definitely changed, but it’s all about balancing our safety with the patients’ safety,” said Frieze who also works part time in a private pharmacy.

One way the clinic accomplished this, following Frieze’s recommendation, was by allowing only one pharmacist to work at a time to limit exposure. They also limit the frequency of his patients’ visits by dispensing additional bottles to be used at home.

“We also have three people who get dosed in a van,” Frieze said.

Concurrently, Frieze is administering pastoral care. He noted that two of his patients have connected to Grace UMC’s online worship services.

“They’re [his patients] usually not part of a church, but here it’s different. There’s a connection, a familiar face,” said Frieze, who added that two others participated in his Bible studies while some stop by the Kearny interfaith network pantry each Friday.

Frieze was ordained in 2012 following a journey to unexpectedly discover his calling. Ten years earlier he was asked by the current pastor of Grace UMC if he would help at the church by delivering the day’s message. One onlooker named John Watson was so moved by his message that he suggested Frieze go into ministry.

He answered his call, and for 10 years he served as a local pastor at Wesley UMC in Bayonne where his journey took yet another detour. Likely recognizing Frieze’s talent in mentoring others, Rev. Joe McCarthy recommended he become a deacon. And so he did and now serves as a candidacy mentor to a deacon named Boram Lim.

“I wanted to give back. No one should have to go through the process without a mentor,” said Frieze who added that he also hopes to help people through their grieving by guiding them through memorial services.

Although Frieze seems to take things in stride one optimistic step at a time, he emphasized the importance of bringing the focus back to addictions once this health crisis is abated. His strong commitment to both his faith and the welfare of his patients works symbiotically to create a treatment plan that helps both short term and long term.

Dr. Kimberly Heckert, a mother of two married to a clergy member of GNJ, also knows very well about juggling short-term and long-term care. As a physiatrist, she treats a wide variety of medical conditions affecting the brain, from cerebral palsy and multiple sclerosis to strokes and amputees.

“I’m with some of my patients for the duration. This is a lifetime commitment sometimes,” said Heckert who added that her field offers a more holistic approach to conventional neurological medicine.

During a normal week, you might find Heckert either administering injections to a patient at a local hospital or tending to one of her patients at a 147-bed rehab facility nearby. But with the arrival of COVID-19, her practice has changed dramatically.

When the virus swept through her rehab facility starting on March 12, killing several of her patients, a colleague and more, the old way of doing medicine screeched to a halt.

“So many died at first. A lot of them had nowhere else to go so they were stuck. It was horrible. People should not have to die like some of them did,” she said. As a result of the widespread outbreak, the facility was converted into one that treated only COVID-19 patients.

Today, all 147 beds are full, and Heckert dons protective gear from head to toe with a gown, N-95 mask, a shield and gloves. When she’s done working with her patients there, she must disinfect, shower and then put back on her street clothes before being allowed to leave.

“We’re in survival mode right now. Then there are days when the sickness, death and sadness are a bit too much to hold.”

When asked how she copes with the heavy burden, she said, “I think we’re all master compartmentalizers. But you can’t let the compartments of the Bento box spill into each other.”

“It’s then that I make a personal decision to shut it down when I need to.”

When she’s not working at the rehab facility, she works with a Physical Therapy grad student named Cody and an iPad to treat those hospital patients she once did at their bedsides.

“It’s an emotional conundrum,” said Heckert who grapples with depending on Cody to be her connection and worrying about the impact of him being exposed to the virus.

Heckert said she is so grateful for the strength and resilience of Cody who seems to share the same passion and dedication that Heckert takes with her every day, whether she’s shrouded in gear or relying on technology to guide her patients to recovery.

Diagnosing Through Glass
Like Heckert, Dr. John O’Grady is also married to a GNJ clergy member. He remembers about 30 years ago as a young doctor of infectious diseases working with AIDS patients and the challenges he faced daily. Then came SARS, Ebola and many others years later. But for this Infectious Diseases Specialist now working at Morristown Medical Center, COVID-19 is like no other.

“It’s almost like battlefield medicine. For the first time, this could be one of us. That’s the scary thing,” said O’Grady who regularly sees patients of all ages in the hospital at varying degrees of severity.

He added, “It’s like Groundhog Day every day. There’s a whole new group of people each morning when I go into work.”

O’Grady said at the height of the crisis, Morristown Medical Center had about 100 people on ventilators. Although that number has dropped to about 50, the same challenges exist like trying to diagnose a patient behind a glass window or comfort them when they become anxious.

He worries about another rash of cases once social distancing becomes more relaxed. Looking toward the future, O’Grady said he also worries about the toll this crisis is having on the mental health field.

“It’s very hard on healthcare workers as they try to communicate with patients and their families, especially for the mentally challenged or the elderly who may not be equipped to operate the new technology.”

He foresees a heavy burden on mental health care for many months to come.