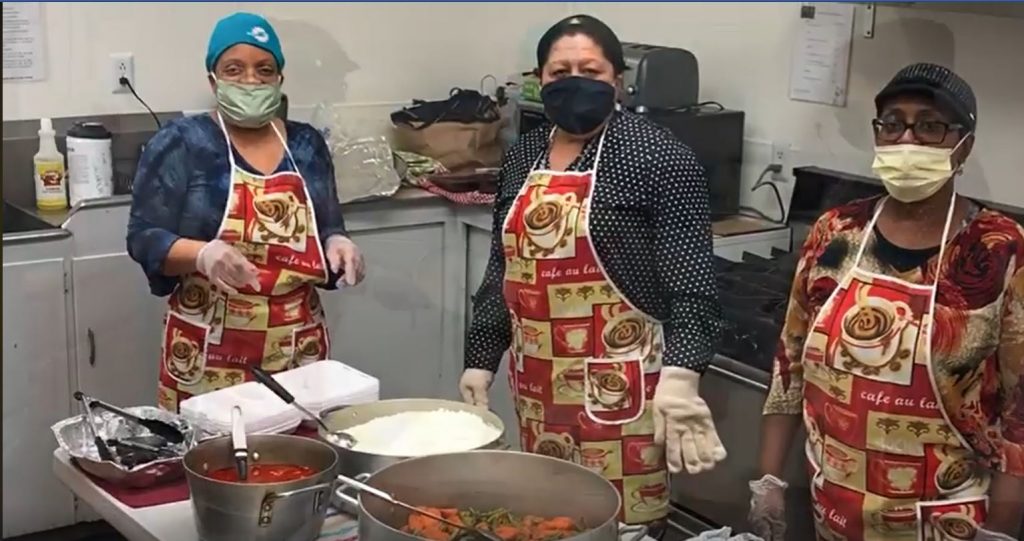 Having a lot on your plate is a common phrase in many cultures, whether you say, “have a lot on their plates,” “ont beaucoup sur leurs assiettes,” “tienen mucho en sus platos,” 그들의 접시에 많은 or another way. But the reality today is that many people have a lot on their plates…except for food. Three New York churches albeit demographically very different—UMC of Spring Valley, New City UMC and Pearl River UMC–are doing their part to fill those plates in the most transformative ways they know how.

The Gift of Giving and Receiving in Spring Valley
At the UMC of Spring Valley, connecting with the underserved in the community and nourishing both their bodies and souls has always been the best part of their ministry. Greetings, hugs and words of encouragement are commonplace there, but recently that expression of gratitude and love looks a little different as long lines form on Thursday evenings and Saturdays and talk of lost jobs and interrupted education spreads amid the aroma of home-cooked meals by church members.

The small town of Spring Valley has become a melting pot of giving, as the people of UMC of Spring Valley cook, package and serve more than 300 meals every Saturday to growing lines of hungry people, many of whom represent the most vulnerable during this time like minorities, immigrants and the homeless.

Rev. Kay Dubuisson, who immigrated from Haiti many years ago before studying and practicing social work, recently recalled a young man who is a frequent visitor to the church. “Towering over many of us and with a frightened appearance, he has become one of our best friends,” said Dubuisson.

“Before the pandemic, he would walk in the fellowship hall giving hugs to everyone repeating ‘thank you for what you do.’ It was our special greeting. Hearing that church doors would close, this young man was heartbroken and he left the church that day hopeless.”

Days later the COVID-19 health crisis hit the community of Spring Valley hard. Many of the small business owners have succumbed to the virus, while others have been forced to shut down either temporarily or permanently, forcing families to ask for help.

“One week we had to unpack the bags and repack new ones so everybody waiting in line would be able to eat,” Dubuisson said. “I don’t see an end to this hunger. It grieves me.”

As unemployment and illness continue to take their toll on Spring Valley, the congregation continues to cook and serve the community members who are Spanish, Haitian, African, Jamaican and Jewish, just to name a few.

“People are waiting for us,” said Dubuisson. Church leaders roll up their sleeves and put on their aprons every Thursday afternoon to serve dinner with safe distancing and then breakfast on Saturday and a modified food pantry midday.

“My focus is to be with those who are in need one person at a time and then pay it forward and keep it going,” said Dubuisson. “If they all have warm food to eat, a place to eat and peace of mind, there will be peace with justice.”

Amid the confusion and uncertainty, that young man who Dubuisson spoke of found it hard to return. But through persistence from the congregation, he found his way back and a new way to show his gratitude by pressing his palms and fingers together and pointing them upwards while holding his hands close to his chest and saying “thank you for what you do.” Then he would add, “I appreciate and honor you,” Dubuisson recalled.

This gesture, the Namaskara Mudra, is a Buddha hand gesture used to greet another being with the utmost respect and honor the Diveine in all and is significant during this time of crisis in the community, said Dubuisson.

“Each week, during a 30-second exchange of giving and receiving of a hot meal, we look into each other’s eyes. There, we understand, is a profound connection, a reverence and gratitude that even in the midst of all that was going on, we are still there for each other.

Offering a Helping Hand in New City
New City UMC, only about four miles away, is doing its best to give new opportunities to those who are suffering and anxious about what the future holds.

“We are doing more support work than anything else,” said Rev. Barbara Hoffman who has led her small congregation for the past five years but will retire this June before opening the church’s doors to Rev. Amanda Hemenetz.

“One of our members, Jeannine Alexandro, has made masks to donate to Spring Valley to give to the homeless folks who come to their food program.”

Other members, Hoffman noted, are donating to the UMC of Spring Valley’s food program and to the Martin Luther King Multi-Purpose Center in Spring Valley, which hands out grocery carts of food to the local children each week.

“One of our members, Dr. Winsome Downie Rainford, is on the board of the MLK Center and has opened up doors for our congregation to take part in the ministries that happen there,” said Hoffman who added that members have also volunteered to deliver food to shut-ins through the Rockland Good News Association food program.

Hoffman added that her congregation is supporting a local community food pantry called People to People and Helping Hands, an organization that helps the homeless in Rockland County.

While supporting local organizations who are struggling to meeting the rising need, Hoffman said she is continuing to support Rockland Clergy for Social Justice, an organization that is committed to salvaging the fledgling East Ramapo Central School District.

Talk, Chalk, Pray and Give at Pearl River UMC
Small churches can also be mighty and Pearl River UMC is no exception. When COVID-19 began to ravage Rockland County, Rev. Gabrielle Martone of the church just north of the New Jersey border, knew that she needed to offer her small congregation hope and empower them to help others who were suffering.

The youth in her congregation recognized this need, so as part of a confirmation project, the Prayer Warrior Virtual Walk was born. Starting on May 1, people were encouraged to walk around their neighborhoods over the next month in a blue t-shirt in support of the COVID-19 efforts.

The goal was to raise $1,000 and donate canned food throughout the month of May to benefit the local pantries of People to People and St. Stephen’s Food Cupboard.

Martone, who noted that the project may continue past the end of the month and surpass its initial goal, added that another confirmand organized the distribution of care packages that were delivered to about 25 shut-ins.

“Our congregation has been amazingly resilient through all of this,” said Martone, who added that many church members are working on the front lines. The have about 36 EMTS, nurses, firefighters and police officers as well as Deb Steward who is a chaplain and lay leader.

The city of Spring Valley, with a population of about 32,000 has undergone some significant challenges in recent years, and the arrival of COVID-19 has not only exacerbated those but has drawn attention to the inequities that have made it difficult for many of its residents to thrive. But together, churches in this region are working to alleviate these challenges and along with this new awareness, a brighter future may be building. And together, they are making the Greater New Jersey Conference even greater.