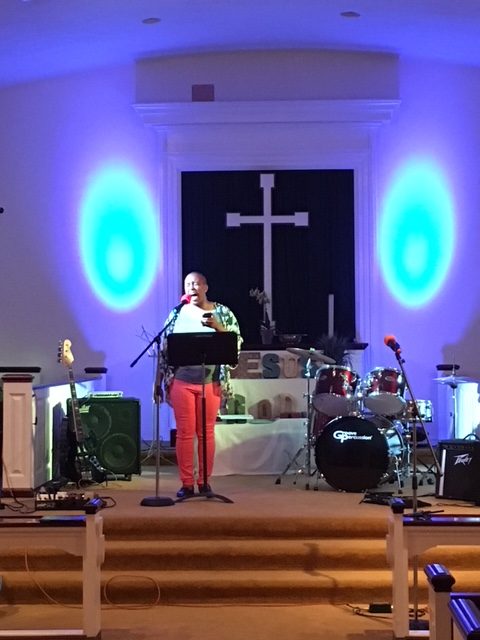 HOPEWELL – Hopewell UMC is making space for the arts community to come to church.  During the last four years, they have used the tools learned during Team Vital training to create a First Friday Open Mic night in the church building which has recently expanded into a regular Concert Series.

Paul BejgrowiczFirst Friday Open Mic and the HUMC Concert Series “as a way to show our support for the artists who have supported us during the past four years.”

Bejgrowicz began the concept for Fist Friday Open Mic when his daughter Ava was taking piano lessons and he started to take guitar lessons to encourage her to practice.

“I thought it would be a great way to play in public in a non-judgmental environment. Many of the surrounding open mics are in bars where the crowd is not necessarily there to listen. The artists and the musicians who attend Open Mic are there to support each other and provide encouragement,” he said.

Bejgrowicz credits  the church’s work with the GNJ’s Team Vital  program as inspiring this  outreach to the local and surrounding communities.

“There is a large demographic of people interested in the arts of all kinds and specifically in Hopewell borough. This is a way to open our space and let people know we are here. There are four other churches and three of them are on main thoroughfares and this gets people down the side street to our church,” he said.

First Friday Open Mic takes place the first Friday of every month from 7:00 to 10:00 p.m. Performers sign up for a 15-minute slot beginning at 6:30 p.m. which is typically enough time for three songs.

“We provide mics and our grand piano as well as lighting. The Open Mic is free and open to anyone of any age and any level of talent. Our youngest performers were 10-years-old. We have had performers come from Pennsylvania, North Jersey, and the Jersey Shore. On average there are 30 people in attendance and approximately 16 performers but as of late the numbers have been increasing as everyone has been playing more into the evening,” he said.

“We have mostly music but we have had spoken word, stories, poetry and some comedy. We also have performers from the Hopewell Valley High School and a local ‘Pops’ orchestra,” he added. “We have families with young children who come out to perform so we started to do our Children’s Open Mic time where members of HUMC entertain the children by doing crafts or other activities to allow their parents time to perform. Most recently, the children decorated bags that are used by the Trenton Area Soup Kitchen to make bagged lunches. The children also create holiday cards and other mission related support.”

As the success of Open Mic has grown, Bejgrowicz was asked to join the board of a local Meet Up group called Einstein Alley Musicians Collaborative (EAMC) and together they have grown the presence of the HUMC First Friday Open Mic as well as the EAMC hosted Open Mics. The EAMC has also partnered with the Princeton Public Library and the McCarter Theater in Princeton to provide shows at all three venues.

“We accept donations for the Open Mic and that money goes toward our mission support. We tie into our other ministries and will have canned food drives for the Trenton Area Soup Kitchen. We  did a diaper drive to support the UMW Mission for the local women’s shelter,” he continued.

This fall’s new Saturday evening concert series will explore different musical styles and sensibilities. A portion of the proceeds will go toward assisting children with special needs to receive scholarships to attend a week at the Elks Camp Moore.

“This new series will draw on individuals and groups who have incredible musical abilities but may be undiscovered talents in the area. Tickets are $20.00 and our doors open at 6:30 p.m.,” he said. “In the past HUMC has taken a specific collective for this mission. This year we hope to raise enough money to send even more kids to camp. The night is mission-focused so while the venue is targeted to the performers they are also interested in supporting ministries and the outreach to the community; it’s really a win-win situation for HUMC, the artists and the missions we support.”