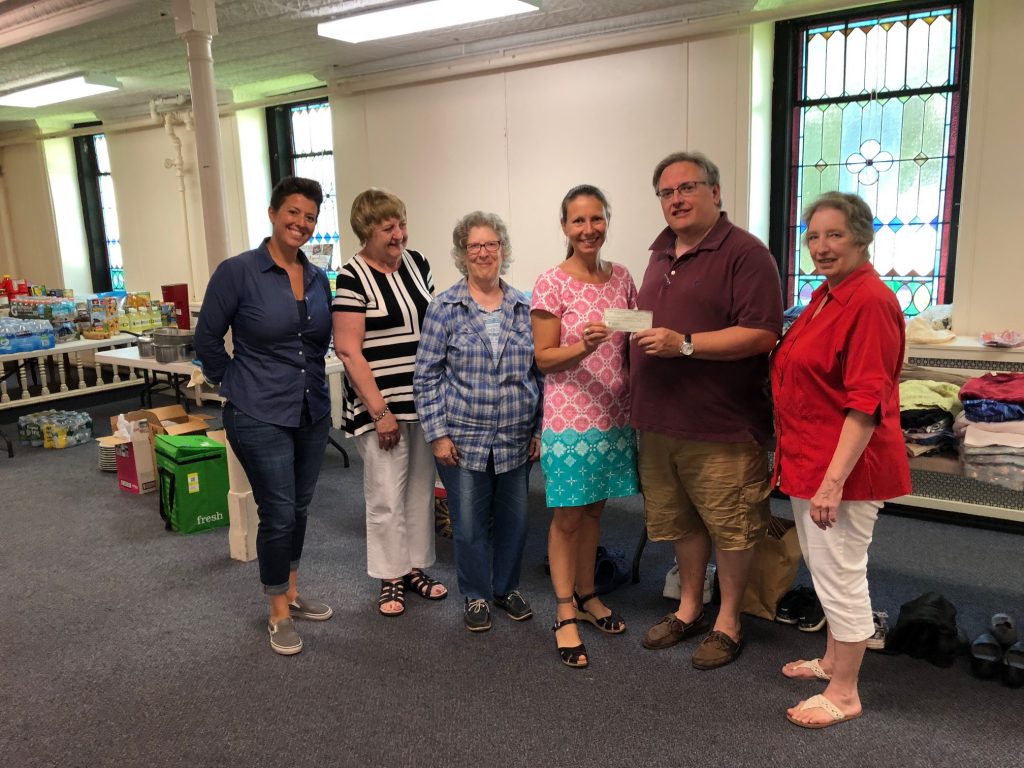 Members of Frenchtown UMC came to the rescue of their community following a devastating fire raising funds and supplies and bringing the neighborhood together in service. Photo provided

FRENCHTOWN – On Monday August 13 at approximately 10:40 p.m., a truck driver entering the tiny Hunterdon County town of Frenchtown lost control of his truck and slammed into Galasso’s Pizzeria. The truck exploded into a fireball awakening the tiny town on the banks of the Delaware River. Thankfully, no one was seriously injured in the accident, although many people living in nearby apartments lost their homes and possessions, and employees of two local businesses were suddenly closed.

About 20 minutes after the fire, Frenchtown United Methodist Church Pastor Peter Mantell was about to turn in for the night about 450 miles away in Toronto, Canada. Mantell and his wife Anna were preparing to drive home to New Jersey the following morning after a week’s vacation. Before Mantell went to bed he checked his Facebook feed and was shocked to see the Frenchtown page blowing up with discussion of the fire. Mantell recounted the sequence of events that followed:

“As soon as I saw the first pictures being posted I called my daughter Jackie and she walked the two blocks to the fire and showed me via facetime. I knew right away that the church needed to get busy! I then placed a phone call to Leslie Stintsman, Frenchtown UMC Council President and Lay Leader, and we soon had a plan of action. By 11:30, less than an hour after the fire started, Leslie had the church doors open and the lights on.”

Mantell went back onto the town’s Facebook page and let everyone know that the church was open in case anyone needed shelter for the night. He also suggested that donations of bedding, clothes or any other essential items be brought to the church. From his Airbnb in Toronto, Mantell followed the events of the town live on social media and continued to communicate with people about what the needs were.

Frenchtown UMC quickly became the central drop off site for fire relief supplies. Clothes, toiletries, bedding, furniture and food was donated by community members throughout the following week. Over the next two weeks, more than $8,000 in monetary donations and $1,500 in store gift cards had been brought to the church, and an astounding $20,000 was donated via the church’s GoFundMe page set up by Mantell hours after the fire.

Several days later, Frenchtown UMC invited the community to come together for a prayer vigil for the town. Mantell’s message to the community was simple.