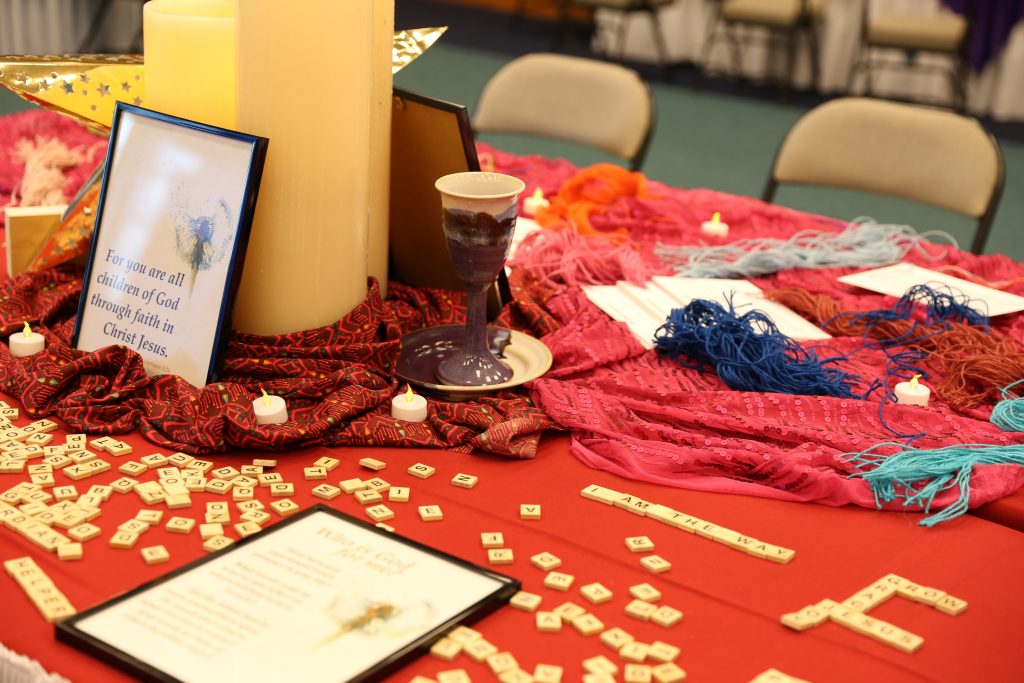 Jo-Anne and Glenn Winzer from Sussex County relish a chance in their busy lives to strengthen their connection to Jesus and to help others. But sometimes that connection can be made in the most auspicious places.

“There’s always a moment for someone to get connected,” said Glenn who is the pastor at the Andover United Methodist Church as well as a longtime auto mechanic.

At the IGNITE Conference in early October, they welcomed everyone with bright smiles and extended hands into a room decorated with colorful reflection tents, safe, beautiful havens away from the bustle of activities for IGNITE attendees to pray, reflect and ask for forgiveness, each room customized according to its message.

There was a “Pray” tent where soft pillows and mood lighting made it welcoming for guests to pray in private or with a friend. The “Cleansing” tent invited guests to write the names of people they needed to forgive on their hands and then wash them off with soap and water. The “Prayer Wall” asked that guests write down a prayer for someone in need and hang it, knowing that their voice would be heard by God. Another allowed guests to create “a family tree” of names who needed prayers.

“Everyone’s experience is different,” said Jo-Anne, who noted that the pottery decorating each tent was donated by a local potter named John Pier. “We’re grateful for all the help we receive to make each experience special for people.”

The display shown that weekend in Wildwood was just a representation of what Jo-Anne and Glenn have been doing every week for their congregations for the past several years.
But the impetus for this idea came in 2010 when Glenn and Jo-Anne were following one of their other passions, drag racing, hundreds of miles away.

They were attending a Racers for Christ conference in Cedar Lake, IN. It was here that the couple discovered the need for private prayer and a place to reflect.

The couple said they like to think of race cars as “church magnets,” as opening doors to conversations. Early on that door they opened allowed Glenn and Jo-Anne to provide solace for those impacted by the sudden death of a young man following a tragic car crash in their community. Those affected were able to bring that rush of emotions they were feeling to the prayer room for serenity.

“All day long I pray. I’m constantly in connection with God, but we realized that others needed the same,” he said, adding that the tragic death in their community reinforced this. “In times of adversity as well as in peaceful times, the need for others to have a private place to pray and express themselves was real.”

Jo-Anne, a dental assistant for 30 years also owned and operated a sign shop. She is now senior pastor at Delaware Valley UMC in Sandyston as well as lead chaplain at Karen Ann Quinlan Hospice in Newton.

“People hurt sometimes, and it is during these times that they especially need a place to talk to God,” said Jo-Anne. “Now they have a nice place to go.”

The couple’s commitment to IGNITE is a natural extension of their service throughout GNJ. Jo-Anne has served many times on the spiritual retreats, The Walk to Emmaus, with GNJ’s Gina Yeske, Director of Small Groups, who said she connected this year with Glenn at Local Pastor’s School. This prompted Yeske to invite the couple to join the GNJ Prayer Team for Annual Conference.

“It has been a wonderful connection,” said Yeske. “The prayer tents were well used at IGNITE, especially during the Small Group breakout times.” They served as a nice respite from the bustle outside the room.

The couple’s connection to God also continues in every facet of their lives. Early next year their daughter, Sarah, who is a teacher will be getting married. Jo-Anne is officiating.