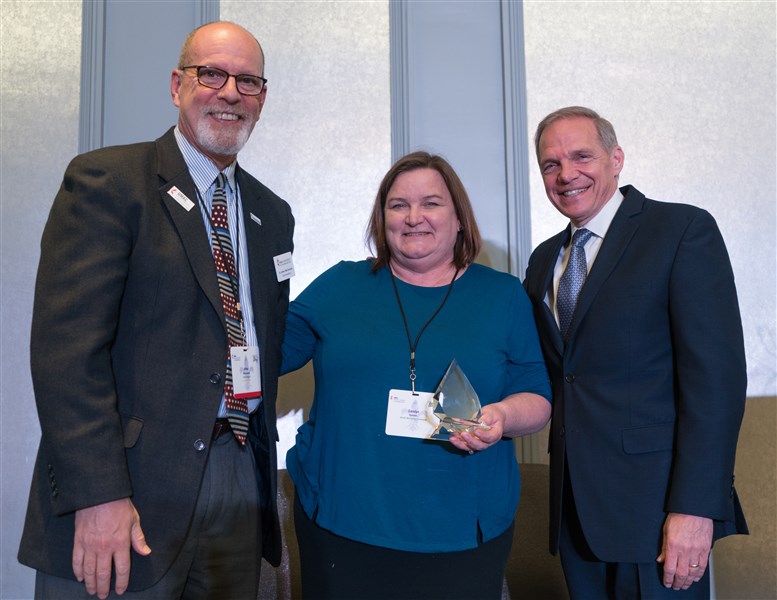 GNJ Director of Communications, Carolyn Conover, received the 2017 Communicator of the Year award at the 2017 UMAC Conference in New Orleans. GNJ was recognized and honored for its work. Photo provided

NEW ORLEANS – GNJ was honored at the 2017 United Methodist Association of Communicators (UMAC) conference on March 23 in New Orleans, taking home six awards for work in design, writing,, blogs, podcasts, and marketing of conference ministries. In addition, Carolyn Conover, GNJ’s Director of Communications was honored  as the 2017 Communicator of the Year.

GNJ was recognized for The Uncovered Dish, a Christian leadership podcast that is hosted by Kaitlynn Deal and James Lee.  The podcast started last fall and highlights the work of conference ministries, church leaders and issues facing the church.  The Connection, a blog written by GNJ’s Connectional Ministries team was also honored.  Current postings and archives of blog and the podcast can be found on the GNJ website and are regularly posted in the Digest and on Facebook.

Other award recipients included Brittney Reilly, Manager of Online and Digital Communications for the design of 2016 Annual Conference “Imagine”, Josh Kinney, Editorial Manager for his work on Bishop Schol’s Relay columns on Graceful Controversies, James Lee, Manager of Visual Arts for the CUMAC video and the IGNITE Squad for the marketing of the annual youth conference.   Our sister organization, United Methodist Communities also won four awards for their work in video and photography.

Conover, who has excelled in communicating the vision and mission of GNJ, was nominated for the Communicator of the Year by Bishop  Schol, who joined her at the conference  to present the award.

“Every bishop needs a Director of Communications who is willing to come into their office and say you’ve got this one wrong, or let’s look at this another way, or how about if we try this,” said Schol, addressing the audience. “Carolyn is that kind of communicator and she has been a gift to GNJ.”

Conover was hired after Superstorm Sandy because of the great need in communicating the work of United Methodists and A Future With Hope in the recovery effort.

“It’s largely because of Carolyn’s work in communication that foundations, corporations, and the government all began to realize that The United Methodist Church was a key player in restoring homes and lives after Superstorm Sandy,” said Schol. He went on to share what GNJ staff members had said about Conover, describing her as a passionate, fearless leader who set the bar high for quality of work.

“The only reason I’m standing here is because I work with a man who has a vision and believes that vision needs to be communicated well,” said Conover. “Bishop Schol brings me to the table so I understand where we need to go and I’m able to help the people around me get there.”

Conover thanked her communications team and said that the award was one in which she shared with the group.

“Because like the conductor of the orchestra, I do not make the music,” said Conover. “I just help make sure the music is heard and sometimes I make it better. You all are the ones who won this award and you make beautiful music that I simply get to push forward.”

She encouraged her team to keep transforming the world, one apostolic leader at a time.

Schol expressed his gratitude on behalf of the United Methodist Church for the work of communications from across the conference.

“The story you tell and the way you tell it helps give life to what it means to make disciples of Jesus Christ for the transformation of the world,” he said.