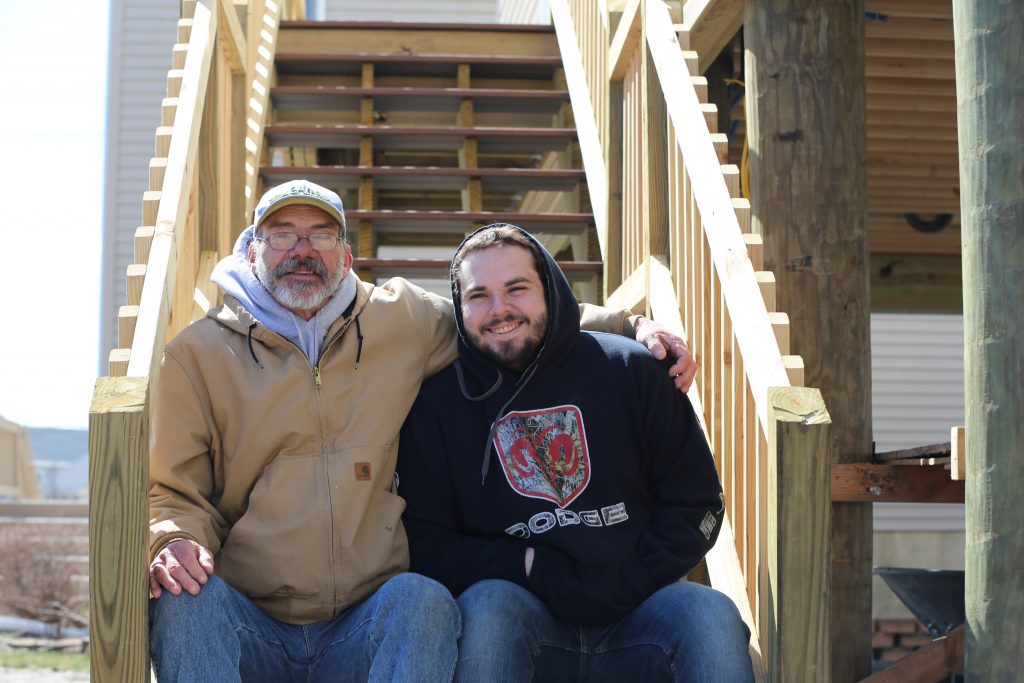 Father and son, Ralph Giles Sr. and Jr. sit together outside their new modular home in Brigantine, NJ. Photo by Josh Kinney

Ralph Giles ran his fingers across the smooth edges of a cabinet in his soon to be new kitchen. He marveled at the crown molding and stack of tiles in the corner that would become the floor of his new bathroom. The intricacies were impressive, and he seemed to find another around every turn. From outlets with USB ports to a thoughtful layout that incorporated a built-in elevator shaft for future wheelchair accessibility, left him awestruck.

“If I were to say what I would have wanted, this is essentially it,” he said, pacing what would become his living room.

Giles and his son, Ralph Jr., toured their new energy star home with unmistakable enchantment. For four generations, the Giles’ lived on the island of Brigantine until Superstorm Sandy threatened to end their family legacy. Nearly obliterated by the storm, the Giles’ home, which was purchased in 1960 by Ralph Sr.’s parents, suffered catastrophic flooding and irreparable damage.

“Do you have any pictures of the old house?” Ralph Jr. asked his father.

“I have pictures of a pile,” Giles chuckled.

“Yeah, that was kind of rough,” Ralph Jr. replied.

The father and son duo recalled the night of the storm when in fifteen minutes, flood water went from a puddle in the street to gushing through their living room. With the sound of each car alarm echoing across the island, they could sense the tidal flood coming closer. The storm not only ravaged their home, it also destroyed their vehicles.

The Giles’ spent years in a grim and worsening state of limbo wondering what they were going to do.

“We are so thankful for A Future With Hope,” said Giles. “I don’t know what else we would’ve done.”

Prior to the storm, Ralph Sr., a single father working in residential irrigation, fell while helping a friend and broke several bones. Ralph, Jr., who was attending trade school in Pennsylvania, didn’t want his dad to ride out the hurricane alone and traveled home to be by his side.

Sandy’s aftermath not only left a battered house for the Giles, it also buried them in paperwork and arguments with insurance companies and the state.

“There was total confusion for years,” said Giles. “The state would ask us to make it so the home was safe one week and the next they would tell us not to do anything or else they wouldn’t be able to reimburse us.”

The Giles had insurance but fixing the house was like  bandaging a mortal wound.  The money  ended up wasted after the house was ultimately demolished.

Despite his personal state of disrepair, Ralph Sr. felt compelled to help his community after the storm. He started working with the nonprofit Blankets for Brigantine which was birthed in Sandy’s wake, and lent his building knowledge assessing homes to discern which could be salvaged.

“I remember since I was a kid, dad saying that if he ever won the lottery, one thing he wanted to do was go to a disaster area and help people,” said Ralph Jr. He added, “As strange as this kind of is, Sandy happening, especially here, he got to fulfill a dream of his helping people in the way he always wanted to. And I gotta say, just the fact that we’ve got all this help means a lot to him because he’s done so much for others.”

Giles praised A Future With Hope for going with him to meetings, coming alongside him and explaining details; getting him through paperwork, patiently enduring and educating him through struggles with technology and onto a path of stability.

“Since the storm hit, I’ve connected with hundreds of homeowners who were impacted and witnessed the toll that being displaced for over four years can have on an individual and family,” said Joy Foley, Intake Specialist and Resource Development at A Future With Hope. “Ralph is unique in the fact that he’s never let the bad days get the best of him. He is an incredibly strong man who decided early on to trust the ever-changing recovery process and is the hero of his own story. I can’t wait for A Future With Hope to welcome him home.”

Giles thanked Foley for representing him and guiding his recovery back home.

“This house is more than a dream come true,” he said. “We could’ve never expected this.”

The two watched as neighbors, friends and fellow islanders dealt with loss. Many families were displaced, split up and scattered. For several people they knew personally, stress levels led to heart attacks and other health ailments.

“I saw all of this happening and thought to myself, you know Ralph, at least we still have each other,” said Ralph Sr. “I think our story is a little different because if it weren’t for A Future With Hope we might not have been kept together. If anything, it’s really lived up to its name because that’s exactly what it gave us.”

With immense pride and appreciation, the father and son  finished their tour of the place they plan to live out the rest of their lives. Ralph Jr. expressed his excitement to one day raise a family in the house and carry on the family legacy as Brigantine natives.

“We’re more than thankful for everything that’s been done for us,” said Ralph Jr. “We could not have asked for anything better. It’s just so much better than we could’ve ever dreamed or expected. I really can’t say enough, we’re so happy and so thankful.”

Nearly five years after the storm, A Future With Hope and three other  recovery groups remain with the resources and funding to help the estimated 3000 homeowners like Giles.  The four groups have formed a partnership , as each recovery group brings different skills and resources to the table. A Future With Hope, the SBP, Inc. and the Affordable Housing Alliance (AHA) working with the Episcopal Diocese of Trenton work to help homeowners as far south as Cape May and as far north as Middlesex County.

Recently, The Robin Hood Foundation recognized the extraordinary commitment and cooperation of these organizations with a new grant to provide funding to families in need. The collective was also recognized as Innovative Program/Partnership of the year 2017 by The New Jersey Voluntary Organizations Active in Disaster (NJVOAD) Board for exceptional innovation and ingenuity through the development and implementation of a partnership that provides long-term solutions to communities.

Through the faithful commitments of GNJ United Methodist Churches, UMCOR, and funding partners, the recovery program established by A Future With Hope has continued to succeed in bringing families home. Through church fundraisers and volunteer sign ups that continue to come in, families like the Giles’ are experiencing restoration.

Giles leaned against the kitchen window and peered out across the yard at another home in the rebuilding process with a trailer bearing the words A Future With Hope emblazoned across it.

“A Future With Hope kept us together for the remainder of my life,” he said through tears. “Once they started helping me I just couldn’t believe it. We weren’t forgotten. We have another chance and a new life. We have a future with hope now.”