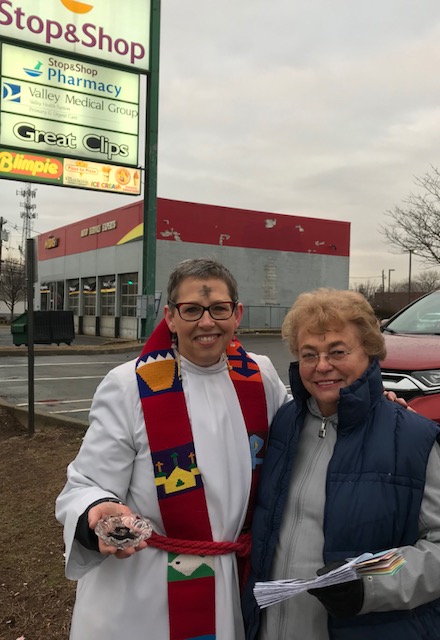 BERGEN CO. – Positive encounters with more than 150 commuters and residents passing through Palisade District towns in Bergen County on Ash Wednesday motivated two GNJ pastors to offer the Sacrament of Holy Communion and prayer outside their churches on Wednesdays, March 7, and April 4 from 7:00 to 9:00 a.m.

Rev. Jongln Lee of the Church of the Good Shepherd in Bergenfield, and Rev. Elaine Wing of Calvary United Methodist in Dumont, were optimistic that people would want to receive Communion and personalized prayer on their way to work or taking their children to school. The two months served as test runs to expand the “outside ministry” for the future.

“We both experienced people thanking us for making the ashes available to them at the start of Lent, so why not the Lord’s Supper once a month,” said Pastors Wing and Lee.  “We want to serve the people in our communities and to share God’s love by praying confidentially with people about the needs they identify.”

Wing and Lee each spoke of significant prayer requests raised by people who came to them on Ash Wednesday at commuter bus stops and in their parking lot.

“We feel that not only will Communion be meaningful, but that a mid-week prayer or blessing will give everyone a spiritual boost!” they added.

While some believe the Sacrament of Communion should be given only within the sanctuary, Wing cites how John Wesley said “the world is your parish.” She tells a favorite story about Communion during a food and clothing run to Lower Manhattan years ago.

“I put a Communion table a short distance from the food truck, so no one felt pressured,” she said. “Many people came over to me and were so grateful. One boy about six- seven years old asked what I was doing. His mother explained the Lord’s Supper in beautiful and simple words before we prayed and he dipped the bread in the cup of juice. Minutes after they stepped away, the little boy came back asking for more.  With eyes as big as saucers, he said, ‘That bread is so good!’ My response was that God’s love is good and that we can always return for more.”

The ministry will not be offered if the weather is extremely inclement. People can remain in their cars or get out. Bread or gluten free wafers are dipped into the chalice of grape juice for sanitary reasons.