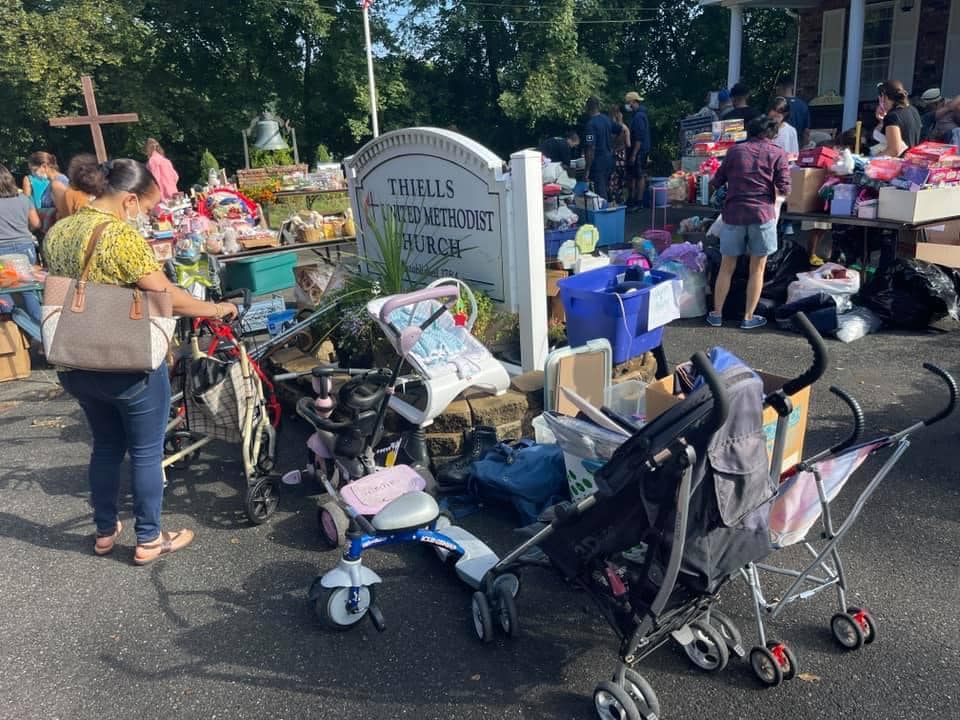 Let us then approach God’s throne of grace with confidence, so that we may receive mercy and find grace to help us in our time of need.–Hebrews 4:16

It was October 30, 2012, and there at doorstep of Carol Anderson’s house was Rev. Jessica Campbell, who at the time was senior pastor at Thiells Garnerville UMC in Rockland County, NY. She also had the unfortunate task of notifying Carol that a tree had fallen on the thrift shop, crushing its operations and wiping away more than a year of hard work to create it and an idea that, Anderson said, was put into her head by God.

“There were the few who felt it was God’s way of telling us a Thrift Shoppe didn’t belong in a church, but there were many of us who felt it was a miracle in disguise,” Anderson recently said. She along with fellow member, Ann Dacre had started the new ministry in March 2011.

“Not only were we able to rebuild in a little over a year, but we were able to have a room built on top of the Thrift Shoppe, our “Upper Room, our bible study area. It has two bathrooms and is totally handicap accessible–we built back better.”

The Thrift Shoppe continued to thrive for another seven years before having to close in March 2020 due to COVID. But once again, that obstacle did not stop the team from opening its doors again on October 23 to a community still in need.

Prior to its opening, Anderson and the thrift store crew hosted three different outdoor sales where everything was priced at one dollar. Proceeds totaling more than $1,000 funded missions in the Dominican Republic, Haiti and the Philippines. From sneakers of all colors to warm coats for college students, they showered their community with kindness.

Anderson remarked that about 50 congregants, including children, contributed to the effort. “It was a wonderful day of fellowship!”

The church’s senior pastor Rev. Jaeyoun Kim said, “We sold most of the items for a dollar because we believe this is a part of our ministry local mission.”

“In general, when a church or an organization holds a big sale, what they pursue is generally to make a lot of money. But for us, profit was not what really mattered.

“All volunteers’ faces were drenched with sweat and looked physically exhausted throughout the day, but I have seen some unexplainable joy and energy in all of them. I think it is because we all agreed that this sale is not for our benefit but doing good deeds that make peace for those in need. We planted peace, and we will have the fruit of righteousness sometime in the future as the bible says.”

Now every Thursday and Saturday from 10:00 a.m.-2:00 p.m. the church’s vital mission will continue to help those in their community and beyond.

“It’s people helping people,” said Anderson who added that Catholic Charities regularly donates items they are unable to sell or give away to their community.

Anderson became a member of Thiells Garnerville UMC at a difficult time in her life in 2004.

Raised a Catholic before drifting away from her faith, Anderson recalled, “My life was in shambles, but here I was welcomed. Here, I found God”

“At the time, I thought everything was against me, but now I realize that with God, everything is possible.”

The church has been a mission-based institution since its inception more than 230 years ago when it first opened as a missionary church to the Native Americans along the Minisciongo Creek. Today, they are still that church who is committed to helping its members like Jesus did.