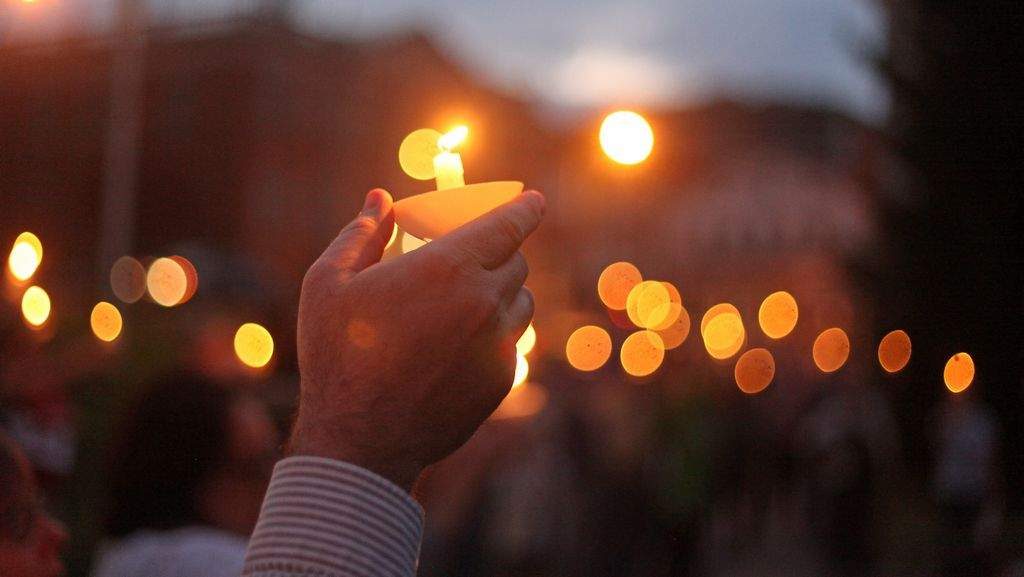 Photo by Jake West/New Jersey Herald - Residents from across Sussex County gather for a candlelight vigil Thursday on the Newton Green. It was organized by local clergy in response to recent acts of vandalism and anti-Semitism that occurred in Hampton

NEWTON — Local clergy members held a “Love Wins” candlelight vigil on the Newton Green Thursday to promote peace and love and to stand up against hate and bigotry.

The event, which was attended by more than 50 people, was a response to recent hate crimes directed at a Hampton Township home, where a swastika was spray-painted on the garage door and on a campaign sign for U.S. Rep. Josh Gottheimer, D-5th Dist.

The Rev. Todd Lattig, of the First United Methodist Church of Newton, joined other clergy members from around the county to organize the evening’s vigil, which included prayer, music, meditation and togetherness.

It was the third rally within a week held in response to the incident. The first was held on Saturday in Hampton Township Park in Hampton and the second was held at Sussex County Community Collegein Newton on Tuesday. A $10,000 reward has also been offered for information on the incident.

Thursday evening’s event began with “Ode to Joy,” played on the bagpipes by UMC of Newton member Mark Hontz, filling the green with music and setting the tone of joy and love.

Clergy members from all faiths joined in the evening, reading scripture and prayers and offering personal remarks.

“We are coming here tonight because a person, a group of people — who knows? — committed an act of hate in our community,” Lattig said. “This isn’t the first time it’s happened and sadly, it probably won’t be the last time it happens. And I don’t know who those people are, or what they do or don’t think, or how their relationship with God is or isn’t in their own minds and their own hearts, and that’s not for me to judge.

“What I am here to do,” he continued,” is to let you know that that is not what God has called us or created us to do. We are not created to draw swastikas on people’s homes. We are not created to intimidate, to cause people to fear, to let people know that they are not welcome here, even though they’ve been living here and belong here. This is not something that we as human beings are called to do. We are called to respond to people in love.”

Lattig reminded those gathered that we don’t have to always agree, that we all should live and let live, and not to live by labels we give ourselves.

“What I want to share with you tonight is this is not political. It does not matter if you are a Republican or a Democrat, it doesn’t matter if you’re conservative or liberal or somewhere in between, it doesn’t matter what you label yourselves as because there’s only one label that counts — child of God,” Lattig said, reminding the group that all people are all equal. “All of us are on equal ground, all of us are loved by our creator, all of us have been given the breath of life, and we are here to do so in love.”

“When hate comes our way, how do we respond? With love!” Lattig declared to the crowd.

Repeating his question, Lattig paused, and those gathered shouted back, “With love!” The chant echoed above the green and filled the night air.

Cantor Rebecca Zwiebel of B’Nai Shalom of Sussex County offered a prayer, with many gathered bowing their heads and joining in. Before doing so she said, “I would like to take just a small moment out of our evening and speak prayers from our own hearts.”

The Rev. Diana Wilcox, of the Christ Episcopal Church of Bloomfield and Glen Ridge, noted that while her church isn’t local, she is a county resident and considers all other residents her neighbors and friends. She offered a blessing to the crowd calling for grace and love.

“Remember as you go back to your different parts of Sussex County, you are not alone,” said the Rev. Amy Lawrence, of the First Presbyterian Church of Sussex.

As the gloaming approached, those in attendance received candles and one by one they were lighted, illuminating the green in a soft glow. A beacon of love and light, the green filled with song as those gathered raised their voices with the songs “This Little Light of Mine” and “Joyful, Joyful We Adore Thee.”

With the evening’s event drawing to a close, Lattig reminded everyone, “We can do this together if we put our hearts together and love. Love will always win.”

Anyone with information on the Hampton incident is asked to contact the Crimestoppers hotline at 973-300-CRIME.

This story originally appeared in The New Jersey Herald .