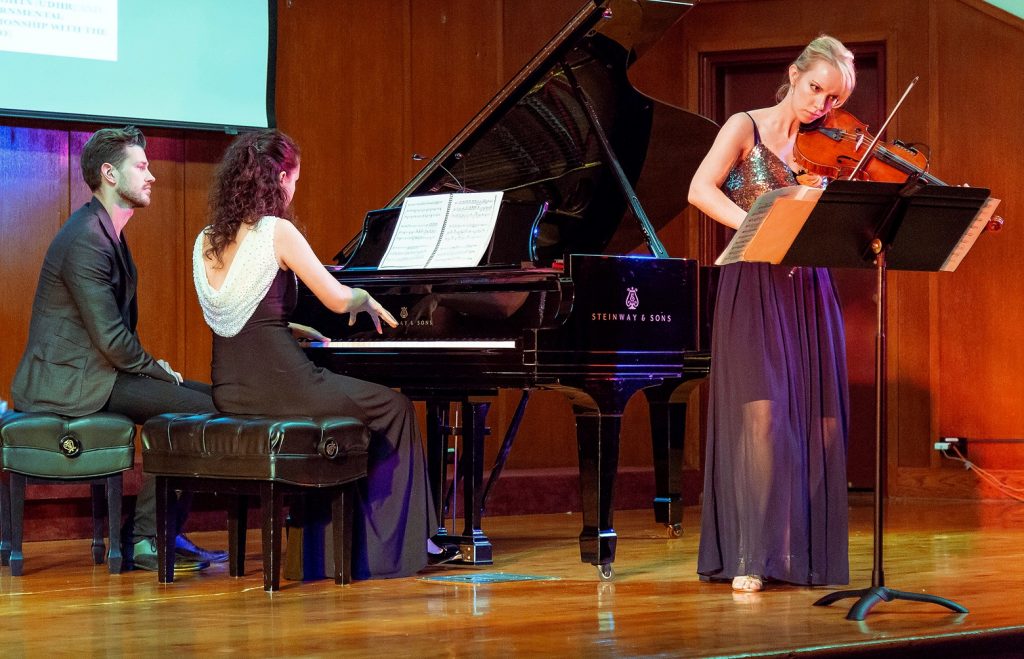 Pianist Anna Petrova (second from left) and Molly Carr (right), perform during a concert in New York to mark the 70th anniversary of the Universal Declaration of Human Rights and highlight their “Novel Voices” project. Photo by Ramon Leonardo Cabrera/GFDD.

NEW YORK – A musical duo’s desire to demonstrate how music can give both solace and a voice to refugees worldwide is getting an extra boost through United Methodist connections.

Anna Petrova, a pianist, and Molly Carr, a violist, began playing together as a duo while at the Juilliard School and the Manhattan School of Music. They conceived their “Novel Voices” project to raise awareness about the refugee situation within their musical circles and show how to use art to make social change.

An Oct. 3 concert in New York, celebrating human rights and non-governmental organizations working with the United Nations, was one part of the project, organized with the Rev. Liberato “Levi” Bautista, who heads the U.N. office of the United Methodist Board of Church and Society.

Petrova told United Methodist News Service that she and Carr realized many friends their age didn’t know much about the current refugee crisis or the people who are doing refugee resettlement work.

“That’s what inspired us even more to do this project,” added Petrova, who teaches at the University of Louisville.

Novel Voices would become an extension of Project: Music Heals Us, a program that Carr created after working in a hospice while briefly considering a career in nursing. Carr, who is currently on the viola faculties of the Juilliard School precollege division, has organized concerts at nursing homes, hospitals, prisons and other locations.

But the two young women needed help reaching the refugee community. Petrova reached out to the Rev. Elaine Wing, pastor of Calvary United Methodist Church in Dumont, New Jersey, where Petrova worked as the church music director for eight years, starting as an undergraduate at the Manhattan School of Music.

Petrova, a native of Bulgaria, said she has received “all kinds of support” from the Calvary congregation. “They’ve become my family,” she explained. “We just clicked really well.”

Wing contacted the Rev. Hector A. Burgos, director of Connectional Ministries for the Greater New Jersey Conference, who suggested getting in touch with the Rev. Jeania Ree V. Moore at the Board of Church of Society. Moore connected them with Bautista. “He just exactly knew what we were trying to do,” Petrova said.

Through the fall of 2019, the Novel Voices team — Petrova, Carr, composer Fernando Arroyo Lascurain and filmmaker and photographer Victoria Stevens — is holding periodic workshops with and performing concerts for refugees in five locations.

In August, Novel Voices visited a school run by the Danish Red Cross at the Jelling Refugee Center in Denmark and worked with children there aged 10 to 18. Some of the teachers were refugees themselves. The head teacher, for example, had come to Denmark from Bosnia during that country’s war in the 1990s.

The participants were shy at first, but “like our best friends” at the end of the two-day workshop, Petrova said. The duo talked about musical devices and sounds that can be used to express emotions and offered short piano and viola classes. Lascurain, who plays multiple instruments, taught guitar and basic piano chords.

“We left feeling so fulfilled and excited and encouraged,” Carr said in a Youtube video posted by Novel Voices. “At the same time, rather heartbroken and a bit overwhelmed but very inspired to continue our project.”

In early October, the team was to spend two days collaborating with the International Rescue Committee, Church World Service and other organizations in New York and New Jersey, working with refugees from Africa.

That collaboration followed the Oct. 3 concert for the U.N. community at the Salvation Army auditorium in Manhattan. The event was a good way to combine both the artistic side and the human side of the Novel Voices project, Petrova said.

For Bautista, the concert also offered an opportunity to celebrate two 70th anniversaries — of the Universal Declaration of Human Rights and of the Conference of Non-Governmental Organizations in Consultative Relationship with the United Nations. Bautista is president of that group, which sponsored the event with support from other organizations, including the Board of Church and Society.

Copies of a resolution from its international board that recommits the group, known as CoNGO, to the Universal Declaration of Human Rights, were distributed at the concert.

“I hope you join us in both our joy for such a document, but equally for our lament in how in many places and instances today these very rights are ignored and violated, including the very rights of human rights defenders themselves,” Bautista told the concert audience.

Formulated after World War II, the declaration ushered in a body of international law and agreements that continue to help preserve world peace, the declaration points out. Now, more than ever, “such fundamental rights and freedoms must be reinforced,” the resolution said.

The musical pieces selected by Petrova and Carr for the concert reflected the desire to maintain human rights and freedoms. The final piece, for example — a movement from Quartet for the End of Time (1941) — was written by Olivier Messiaen, a devout Catholic, when he was in a prisoner-of-war camp in Germany.

“This piece is truly timeless,” Carr told the audience. “Even behind bars, he (Messiaen) was looking to the future, he was looking to a time with no pain, a time of pure justice and peace.”

A December workshop will take Novel Voices to Los Angeles, where they will work with participants in refugee resettlement classes. Next year, the team will visit refugee centers in Israel/Palestine and Bulgaria.

Lascurain — who wrote a piece for the Oct. 3 concert, “Call and Prayer,” that was inspired by the workshop at the refugee center in Denmark — will use the conversations and encounters from all the visits as the basis for a final musical composition about their experiences. The result will be an album, film and benefit concert at Carnegie Hall in September 2019.