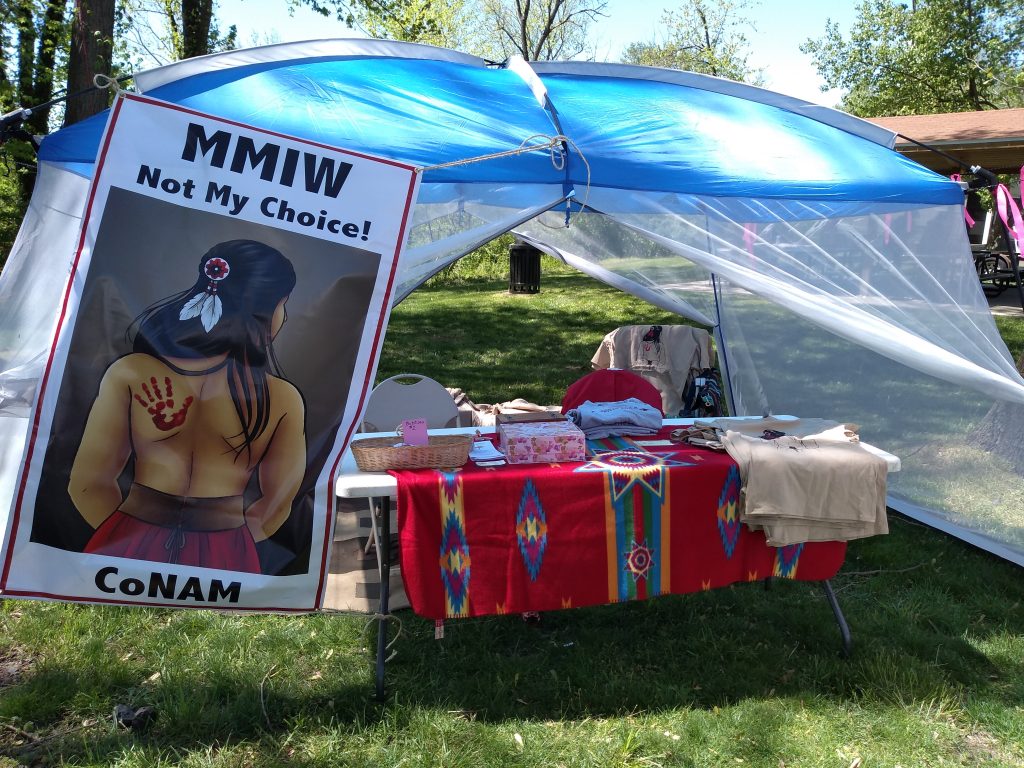 “I always say Tongva women never left their ancestral homeland, they just became invisible. ‘How do we make ourselves not invisible?’ is the question I ask every day.”–Julia Bogany, educator, activist and member of the Tongva tribe who died on March 28 of complications from a stroke

For Rev. Alvin Deer, a retired United Methodist pastor, memories of his daughter, Michelle are bright and filled with happiness but lurking behind that joy are memories of sorrow and pain. In 2006 Deer’s 33-year old daughter, who was part of the Kiowa, Caddo, Wichita and Muscogee tribes, went missing, her body found shot in the face and neck on the side of the road. Years later her father is remembering his brave daughter who shortly before her death made the decision to seek treatment for her addiction before leaving behind six children and joining a staggering statistic that also includes Ida Beard, Aubrey Dameron and countless others. May 5 marked the fourth anniversary of the day designated as the National Week of Action to honor and call for justice for missing and murdered Indigenous women and girls (MMIWG) by the National Indigenous Women’s Resource Center.

For the Native American community, this is just one more way they have been made to feel invisible, which many see as the modern form of racism against the community. Because Native Americans are often “invisible,” so are their struggles.

Since that day in December, Deer has worked hard to call attention to these deaths, many of which fail to get the attention they deserve. Among those working with him are Raggatha (“RagghiRain”) Calentine and Cynthia Mosley, a  member of the Lenape tribe who chairs the GNJ Committee on Native American Ministries (CoNAM), serves on the board of the Native American International Caucus (NAIC) along with Deer, Calentine and others and leads the food ministries at St John UMC Fordville, GNJ’s only Native American church.

In early May, CoNAM and Northeastern Jurisdiction hosted the Circle Legacy pow wow in Pottsdam, PA, with powerful artwork from Paige McNatt, a young woman who is part of Lenni Lenape and the grassroots organization called The REDress Project. Red dresses hung to draw attention to the women murdered or missing, and traditional dance and music were featured at the seventh annual event.

The murder of Michelle Deer happened thousands of miles away, so for some it may be easy to turn a blind eye. But imagine being one of the more than a million American Indian and Alaska Native women aged 10 to 24 who have died from violence but whose case is never solved. Imagine being a victim of COVID-19 and instead of being included in a separate column labeled Native American, you are among those in the “Other” column. Imagine being told as a child that you need to “act more American” so that you can fit in, or that you need to abandon or suppress your culture in school so as not to disrupt the school day.

In talking with many Native Americans over the past year, it became evident that almost every one of them felt invisible, a sobering reality that many say leads to their vulnerability.

The murder rate of Native women is more than 10 times the national average. These disappearances or murders are often connected to domestic violence, dating violence, sexual assault, stalking and sex trafficking. Despite how high these statistics are, they cover only a small percentage of all the Native women who are victims of violence every year. Many of violent crimes do not end in murder, but most studies show that four out of five Native American women experience violence in their lifetimes.

And as the chokehold of the pandemic strangled the freedoms of many, reports of all forms of violence against women and girls, particularly domestic abuse, began to rise.

But time and time again Native Americans are ignored, told to be compliant, keep their histories to themselves and made to feel invisible in spite of all the contributions they bring. There are more than 570 federally-recognized tribes, which of course does not count all those who are not recognized. With these many tribes come their own cultures, languages, spiritualities and histories. In spite of over 600 years of occupation, Native Americans continue to make enormous contributions to the church and to civil society.

For Deer, who is the treasurer for the NAIC, their voices need to be heard. Mosley echoes his feelings.

“We feel devalued, disrespected, dishonored and disenfranchised, but we are also determined. We are determined to honor our ancestors, to educate our children, to speak out in a bold way, to revere our Creator and to practice our culture every day,” said Mosley.

It has been said that this feeling of invisibility along with unresolved historical trauma passed on from generation to generation, widespread poverty and healthcare disparity lead to this higher incidence of violence.

Native American women endure appalling levels of violence. According to the National Institute of Justice, about 84% of Indigenous women experience domestic violence in their lifetimes, and more than 50% experience sexual violence.

The new U.S. Secretary of the Interior Deb Haaland said, “In spite of our agonizing history, Native American people find much to celebrate. The songs, the dances, the culture and traditions surrounding planting and harvests, the prayers that are sent upward for healing and peace, and the welcoming of children into our families, are all reasons for us to keep moving forward with optimism.”

Haaland’s appointment represents hope for undoing destructive policies, and it represents renewed hope for the land and for the Indigenous nations of this country. In an effort to provide more resources to investigate thousands of unsolved cases of missing and murdered Native Americans, on April 1 she launched a new Bureau of Indian Affairs unit.

Without the proper resources like access to healthcare or adequate transportation, victims are often lured into cars. According to the Urban Indian Health Institute, homicide is the third-leading cause of death among American Indian and Alaska Native women aged 10 to 24. But without assistance from non-tribal federal, state and local agencies, these cases have gone underfunded and uninvestigated.

Haaland also announced April 22 that she is creating a joint commission, led by the Department of the Interior and the Department of Justice, to identify and curtail violent crimes targeting Indigenous women. Her action stems from the enactment last October of the Not Invisible Act, which calls on the Interior Department to oversee grants and programs to tackle the crisis.

Eleanor Roosevelt once said, “Where, after all, do universal human rights begin? In small places, close to home — so close and so small that they cannot be seen on any maps of the world. […] Unless these rights have meaning there, they have little meaning anywhere. Without concerted citizen action to uphold them close to home, we shall look in vain for progress in the larger world.”

At GNJ, it is in these small places that we have hope that we can be part of the change through committees like the NAIC and CoNAM and initiatives like A Journey of Hope, a five-year plan to work together toward ending the sin of racism. One way we are doing that in 2021 is by broadening our outreach to specifically include Native Americans as the pandemic bears down on their communities to reveal an epidemic of violence.

“This is a promise that has promise,” said Mosley, who added that after years of broken promises, she is encouraged by the new plan to end the sin of racism and restore dignity to her people.

When Deer was asked how he wants to remember his daughter, he said, “We are so thankful that Michelle had turned her life over to the Lord during that time. She and her husband had gotten back together and had a child, whom she named Cielo, which is Spanish for Heaven. We found out from her old friends that she started witnessing to them about the dangers of drugs and their need to turn their lives over to Christ. We know where Michelle is now.”

To learn more about the 2021 National Week of Action and how you can help, visit https://live-niwrc.pantheonsite.io/. Additional resources and news can be found on the GNJ CoNAM webpage.