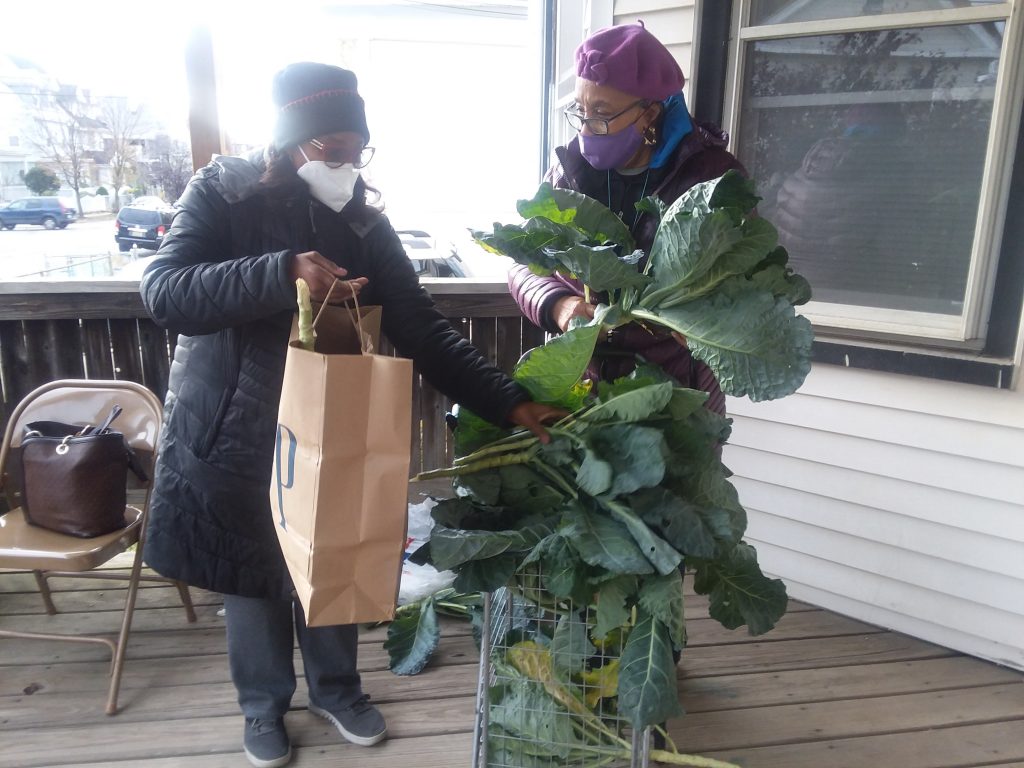 Jesus’ teachings are alive at Christ Church in Paterson in so many fruitful ways. When the pandemic bore down on an already fragile community, Pastor Kermit Moss knew Christ Church needed to be a more vital resource for the local residents who were reeling from lost jobs and healthcare uncertainty and disparity.

“Paterson is a city that has been characterized as a food desert. The food ministries of Christ Church United Methodist are a compassionate response to issues such as lack of nutrition, food insecurity, food access and food quality,” said Pastor Kermit Moss. “This vital outreach to our neighbors is part of Christ Church Cares. We believe that good food is good for our bodies and our souls.”

Established in March 2020 when no one knew the scope of the pandemic or the far-reaching effects it would have on families, the Christ Church United Methodist (CCUM) Food Pantry opened its doors and hearts. This ministry was in addition to the existing three food ministries they had started years earlier—Bread of Life, Garden of Eden and Fresh Produce.

Now more than a year later, the faithful volunteers led by CCUM Food Pantry Coordinators Pat Fermin and Sharon Owens have distributed food to many neighbors and friends in the Paterson and surrounding areas.

The Pantry is stocked by the generosity of the CCUM congregation as well as non-members. Canned goods are collected throughout the week, and the coordinators meet to stock the shelves and take inventory in preparation for the next distribution.

During the pandemic, the empty parsonage has doubled as the collection and distribution site. As of late April, they had held five distribution giveaways. Plans are to partner with the other feeding programs to hold a big event this fall.

Their commitment to the community has not gone unnoticed. One client shared that he and his wife both lost their jobs due to the pandemic, so receiving groceries has helped him during a time of uncertainty and scarcity. In addition to food, families are also able to receive gift cards to local supermarkets and reusable cloth masks.

In conjunction with this new feeding program, the congregation offers its Bread of Life Ministry, which was born in April 2017, as a result of the church’s participation in Team Vital, a GNJ program that is designed to help churches grow and become vital congregations. The purpose of the ministry, led by Joyce Thomas, is to help alleviate the needs of people experiencing homelessness in the city.

On the fourth Friday of each month, members put together sandwiches and distribute them along with bottled water, fruits and snacks to individuals on the streets. This gave the volunteers the opportunity to interact one on one with Paterson residents. Along the way they also honor individual prayer requests. In 2018 the ministry was recognized with a certificate from the Conference.

“This past February, the ministry was reinvented, thanks to an idea from church member, Deborah Major, when Christ Church partnered with and adopted the Rehabilitation Center of the Salvation Army in Paterson with permission from Mr. and Mrs. Lieutenant Weems, administrators,” said Andrya Edwards who co-leads the church’s Communications team.

With this partnership, they have been able to supply sit-down meals each month. The ministry team recently hosted a sit-down meal with the Lieutenants and 32 residents of the Adult Rehabilitation Center who also received articles of clothing from the church.

As the warmer weather approaches and with vaccinations on the upswing, the plan is to continue with the Salvation Army partnership and to return to the one-on-one contact with people experiencing homelessness, said Edwards.

As sit-down meals are prepared inside, a garden outside thrives with crops to feed the hungry.

The Garden of Eden Ministry began in 2016 from a series of vacant plots, which extended around the sides of the church. This area was turned into four plots of an organic, flourishing garden with the fertilization of all organic products.

All of this was made possible with the partnership of City Green, which provided grants from 2016-2019.  Christ Church is also in partnership with Public School Number 13. Their students visited the garden as part of a field trip and learned about planting, harvesting, sustainability and how the produce arrived at the dinner table. The students were involved in hands-on gardening as much as possible.

In November 2020,  in conjunction with the Fresh Produce Ministry, 30 families were served from the garden, even in the midst of the pandemic.

The Fresh Produce Ministry began in July 2019, in partnership with Star of Hope Ministries as a monthly distribution to people in the community.

When the pandemic began, the distribution increased to weekly and began to partner with the local grandparents’ organization, said Committee Chair McKnight-Young who added that the distribution then increased to three times a week and has continued, which has allowed them to serve at least 80 families each week.

“This past summer, volunteers from other churches by way of the Fresh Produce Ministry delivered boxes of food/vegetables to 10 homebound persons for eight weeks,” she said.

This Ministry is also in partnership with a local daycare facility and with another community church to aid with the distribution and ensure more persons are reached.

These four ministries have worked in tandem over the past year to feed its community in a transformative way. As they look ahead to the future, there’s no doubt that they will continue to grow this fall and beyond.