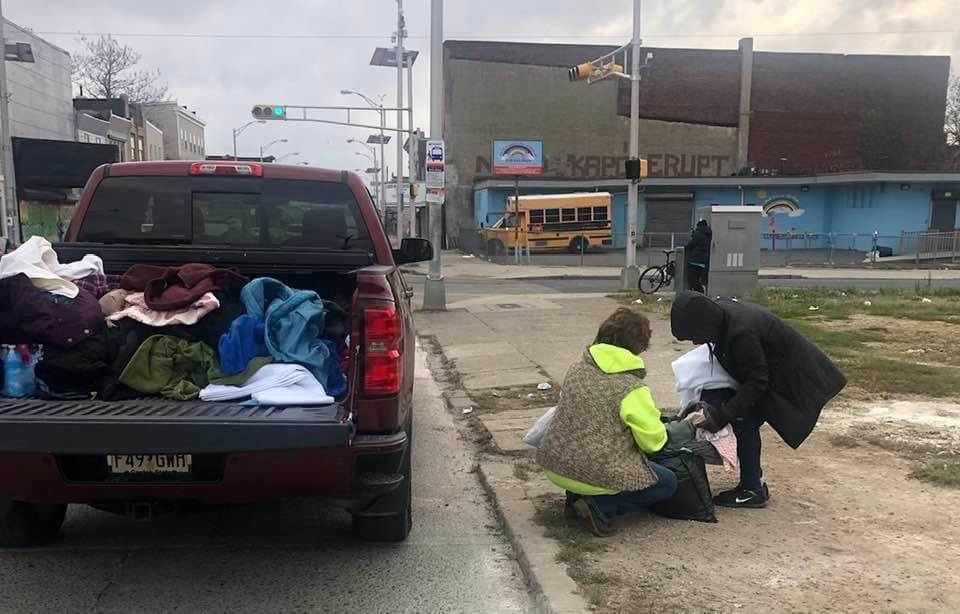 “Hope and fear cannot occupy the same space. Invite one to stay.”—Maya Angelou

The following excerpt was written by Carol Brozosky who is the missions committee chair at Richwood UMC in the Delaware Bay District. Through her tireless efforts, unwavering compassion and naturally keen curiosity, she connected in September 2020 with another woman named Allison who for nearly four years has been providing support for the growing number of homeless in Camden.

“I feel compelled to work towards changing the perception of our homeless brothers and sisters in Christ and the stigma attached to the addict,” said Brozosky. The following chronicles one day spent at a tent city under a bridge in Camden.

Occasionally, if we are lucky, we meet someone who changes your life. He brightens your day. You can’t stop thinking of the encounter. A God moment happens. And it is not a coincidence that it happened to me on my December birthday in 2020 in Camden, helping the homeless. There among the tent cities under a bridge, I found a brother in Christ. I met Uriah.

That is his pen name – his real name doesn’t matter right now. He shared with me his story…. one of heartache -losing his nine-year old son years ago. Then later, another tragedy 26 years ago – a car accident that left his friend dead and Uriah in a coma. How he ended up homeless I don’t know, and that also doesn’t matter right now. What does matter is his poetry. His simple prose centered on God.

He promised God during his three-week coma, that he would come back sober and re-awake people. He calls it his Jesus “Repairing Mission.” He said, “you know… like John the Baptist.”

Here is one of several of Uriah’s writings. I focus on this one to shed light on his character. This poem speaks of the trials of an addict. Maybe it isn’t noteworthy of a prize, but it comes from the heart.

I want to understand the struggle of addiction and heartache that leads humans to homelessness. I want to befriend someone in need, but right now my job is to get his God sanctioned message out.

I believe we need Uriah. And his optimism. And his Jesus “Repairing Mission.” Amen.

In partnership with Allison Mason, Brozosky and her team serve breakfast, deliver clothes and blankets and offer varied support for substance addicts, often connecting them with rehab programs if possible. The mission project is called Alliance with Allison.
“Our mission service has blossomed from bringing a few things like cereal and snacks, to weekly loads of warm clothes and blankets, hot meals and a listening ear,” said Brozosky who recently reported that the church will soon erect a shed at the tent city where supplies can be housed.

“I am getting to know people on a first name basis. Many God moments,” said Brozosky, who is a Certified Lay Leader. As chair of the missions committee, she has led several mission trips to third world countries and local disaster relief work. She was on the Conference Disaster Committee as ERT Coordinator before, during and after Superstorm Sandy.

As an UMCOR Early Response Team authorized trainer, Brozosky instructed over 300 Methodist volunteers to provide disaster response on UMCOR Early Response Teams. She organized disaster teams from around the country in the first eight weeks after the storm hit New Jersey. In 2013, she accepted recognition from Bishop Schol with the receipt of a banner from the Conference for service as a Lay Leader.

A program known as the “point in time count,” an annual statewide effort first mandated by the U.S. Department of Housing and Urban Development in 2005 to identify homeless people so that assistance programs can be tailored specifically to these people with the intent of helping them.

It will be a few months before this year’s homeless count is released and New Jersey will get a clearer look at the impact COVID-19 has had on its communities as shelters have been forced to cut their numbers of beds.