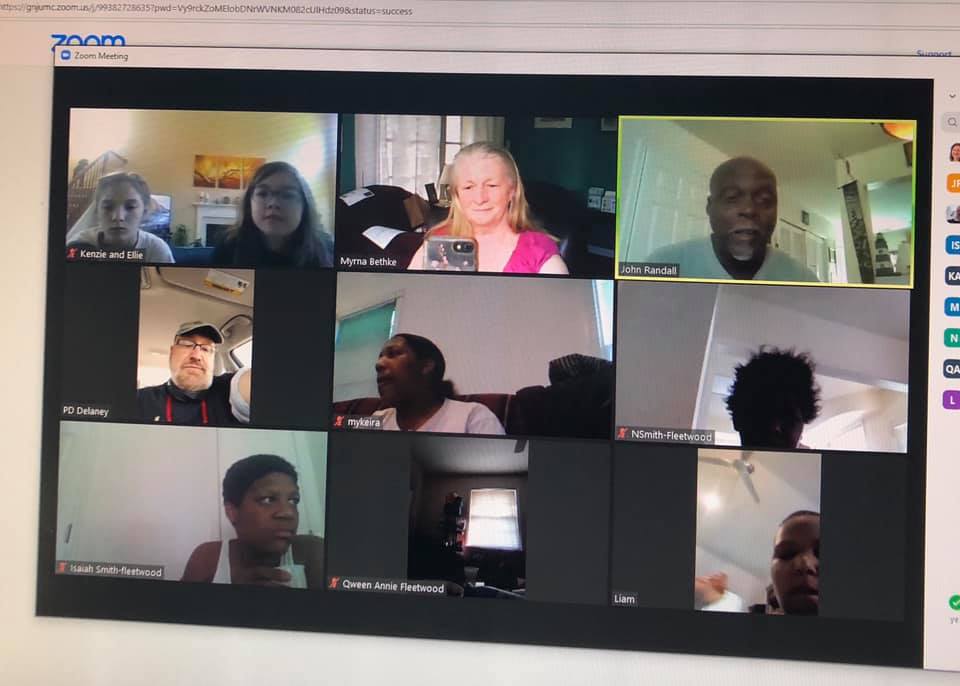 “But since you excel in everything, in faith, in speech, in knowledge, in complete earnestness and in the love we have kindled in you, see that you also excel in this grace of giving.”—2 Corinthians 8:7

Never did a group of teenagers in south Jersey think they would be watching a 60-something-year-old doing cartwheels on a Sunday evening last November at Zion Community UMC in Clarksboro but that’s what kicked off the beginning of what was informally called the Cluster Youth Group.

“Myrna [Bethke] was a kid at heart, body and mind,” said one of the leaders, Rev. Dave Delaney of St. Paul’s UMC in West Deptford. “I guess you could say in stature too!” Delaney added with a laugh. “Her last text to me was ‘LOL.’”

Rev. Tiffany Murphy of Zion Community agreed. “As good as she was with adults, Myrna was amazing with children. She had this uncanny ability to relate to adults and children equally.”

Last October under the leadership of Gateway South District Superintendent Myrna Bethke, who often remarked how “awesome” it was, a group represented by local United Methodist churches that also included Clonmell UMC and Mt. Zion Wesley Church in Wenonah, was born. Their first meeting was held in November when they stepped outside their comfort zones to learn about each other and explore how to be more self-aware.

“Myrna wanted to be in conversation with one another to discuss whatever the kids may be facing,” said Rev. John Randall of Mt Zion. “It gave them an avenue to talk to someone. This gave them the opportunity to know someone was listening.”

The group of church leaders and about 20-30 children, who were predominantly in middle school, continued to meet the first Sunday of every month for about an hour and a half of food, fun and devotions in the fellowship hall at Zion Community UMC until the pandemic hit. The transition to a virtual meeting was seamless as everyone involved remained devoted to their mission, and the children relished the opportunity to be filled with the perfect blend of spirituality and fun.

“We totally enjoyed listening and watching these teens on Zoom while Myrna and I would be texting back and forth laughing and enjoying the kids,” said Delaney. “She would preach a sermon and then have the church family engage in an adult size version of Jenga. That’s who she was.”

Interspersed with all the laughing and yes, cartwheels, were powerful messages that kids mattered, that their voices were being heard and that they all had a place in God’s house. During another meeting youth were invited to take part in a scavenger hunt to learn that the church is alive.

“To be able to share faith, answer questions and laugh without hesitation every week is pretty special,” said Delaney.

The last meeting with Myrna was held on June 7 when the group discussed how to combat racism and planned a picnic for the summer.

“I remember that day so well. We talked about racism because Myrna never refrained from tackling any challenge, and the kids were eating pizza like they never have before. I’ll remember that fondly,” said Randall who recalled his own time spent in cluster groups back in the early-1970s at Pitman UMC with Bill Wilson, said, “Cluster groups give us a greater understanding of who we are, and with Myrna you were not a bystander; you were a participant.”

Myrna’s impression on the youth was indelible. They quickly learned that her zeal for enjoying life was matched by her devotion to them. The cartwheels she turned in front of the youth put minds at ease for those who may have been nervous to enter into a new group.

“They also taught the youth that church leaders are people who liked to have fun too and that you can laugh and love each other no matter where you come from,” said Delaney. “The parents don’t know how they’re going to tell their kids she’s gone. They’ve come to love her so much.”

The group is considering starting up again in September to keep the connection ministry alive. They are also looking into implementing a mission project to help others.