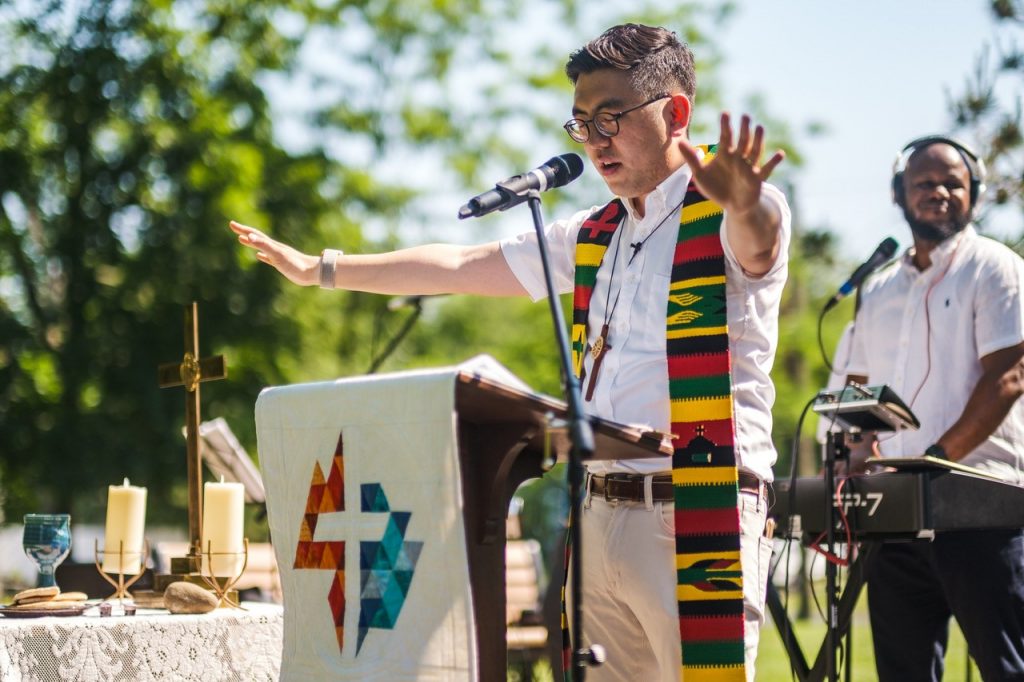 “We are mirrors whose brightness, if we are bright, is wholly derived from the sun that shines upon us.”—C.S. Lewis

James Lee grew up as the son of a pastor. After experiencing the first part of his calling as a child while growing up in Madison, NJ, he stashed that feeling away when the doubt was too heavy. But, as always, God was patient with James.

He and his family moved to Korea for a few years, but his mother brought James and his brothers back to the United States for more opportunities, while his dad stayed in Korea.

He wound up seizing one of those opportunities, enrolling in pharmacy school at Rutgers University in hopes of garnering a lucrative salary.

But an unexpected car accident during finals interrupted that goal and opened up a door to a new journey for James.

“My friend drove me to exams, and my mind went blank. I wound up getting two Ds. I flunked out,” said James who added that the feeling of failure was paralyzing. “I felt emptiness.”

But through a lot of soul-searching and a faith in God, James changed his direction by brushing up on his video editing skills and starting his own video production company in 2012. For six years his business provided him with a conduit for storytelling, a passion he continues to carry with him today. It was also in this year that he married the love of his life and frequent laughing partner, Julie.

“Then God told me it was time to pursue my calling,” said James who enrolled at Drew Theological School, which was his dad’s alma mater. He received a M.Div. in 2014.

The pastor with an inviting smile and sharp but humble wit never looked back. Despite some difficult years, his relationship with his dad is now amazing.

“He told me, ‘you are my son, and I am proud of you,’” said James who now relishes the conversations he has with his dad.

Today, the 33-year-old pastor at Wesley UMC, who was ordained as an elder this past May, is passionate about cultivating the divine spark in people through creative worship, Christ-centered discipleship and visual storytelling. He shared some of his story through a powerful session of spoken word at the ordination.

When asked if he feels any differently since being ordained, James said, “I’m still the pastor of the church I love.”

Prior to coming to Wesley in 2018, he served as the associate pastor for Calvary Korean UMC in East Brunswick, as the senior pastor of Conklin UMC in South River and as the manager of visual arts at GNJ, during which time he created The Uncovered Dish Christian Leadership Podcast, a wonderful communication tool that connected congregations.

Now in 2021, James is still having conversations to learn and grow, even if they are uncomfortable ones.

“Whenever I’m placed in a situation when I’m asked to accomplish something that is far greater than me, my strategy is to have a lot of fun,” said James.

As he continues to navigate through uncharted waters, James is moving forward with hope. “At the beginning, the uptick in technology was exciting. Then the realization hit how those online relationships are just not enough. I’m looking forward to the time when can hold hands, make eye contact, feel the vibrations of our heartbeats and hear each other breathe. We all need this.”

He added, “I want people to experience a God who is fun and likes to play.”

“Sometimes there are parts of me that come out that I never knew existed,” said James who is often faced with the unexpected and plenty of laughter as the father of three children, Amy (6), Adam (4) and Renee (1).

When he’s not doing ministry or spending time with family, James loves to play the guitar or hunt for a good cup of coffee.

For James, life has always been one of pursuing happiness, opening up his heart to God’s brightness and being open to reveling in what makes him laugh. GNJ is lucky to be the recipient of James’ reflected brightness.