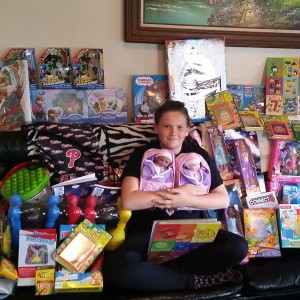 Savanna Schaekel didn’t mind sharing her soccer ball with a homeless child. What she did mind was seeing that the child had no other toys to play with.

That homeless child and others were among the families staying at Mantua United Methodist Church, the Schaekel family’s home church, as part of the Family Promise Network.  When Schaekel was at choir practice one evening, one of the children staying at the church wanted to play with a soccer ball that was attached to Schaekel’s ankle with a string.

When Schaekel removed the string and ball from her ankle, it was the beginning of her becoming attached to the homeless children who had nothing else to play with.

“It was a practice soccer ball where you can hook it around your ankle, kick it and it comes back to you,” Schaekel said. “There was a little 2-year-old who wanted to take it and I let her have it. But when I had to leave and take my ball with me, she was upset.”

That event made Schaekel, who recently completed sixth grade at J. Mason Tomlin School, realize children in the Family Promise Network should have toys and things to play with like most other children do. She and her family had two bake sales and took private donations to raise money to buy toys for those children. There are usually between five and 10 children with their families that stay at churches in each county on a rotating basis.

“We originally wanted to buy one toy for each kid,” said Tracie Schaekel, Savanna’s mother. “But we ended up having three per kid and some left over for the next time they came in.”

The Schaekels said the best part was seeing the reaction of children when they received the toys.

“They were excited and even the parents were saying they remembered some of those toys from when they were kids,” Tracie Schaekel said. “We probably had 40 or 45 different things and there are some toys that can stay at our facility, like a miniature bowling set that would be hard for them to carry back and forth.”

One concern the Schaekels had about giving out toys was just how the children would carry them from place to place. They took care of that potential issue, too.

“We got them drawstring bags and Savanna put their toys in the bags,” Tracie Schaekel said. “We were only going to give them one toy because they don’t have a lot of room, so that’s why we got the bags for them.”

Mantua UMC pastor Rev. Doug Baitinger is glad to have people in his church who are not only thoughtful, but also faithful.

“It’s a great feeling to know that I have a congregation that really uses the church like the body of Christ,” Baitinger said. “Savanna is one of the many who reach out and share God’s love. For a 12-year-old, she knows what service is and to see her live that is wonderful.”

Baitinger pointed out that it’s one of the best examples of how faith can work.

“Faith has to be an action and visibly lived,” he said, “and that is certainly what Savanna is doing. She is a good young lady.”