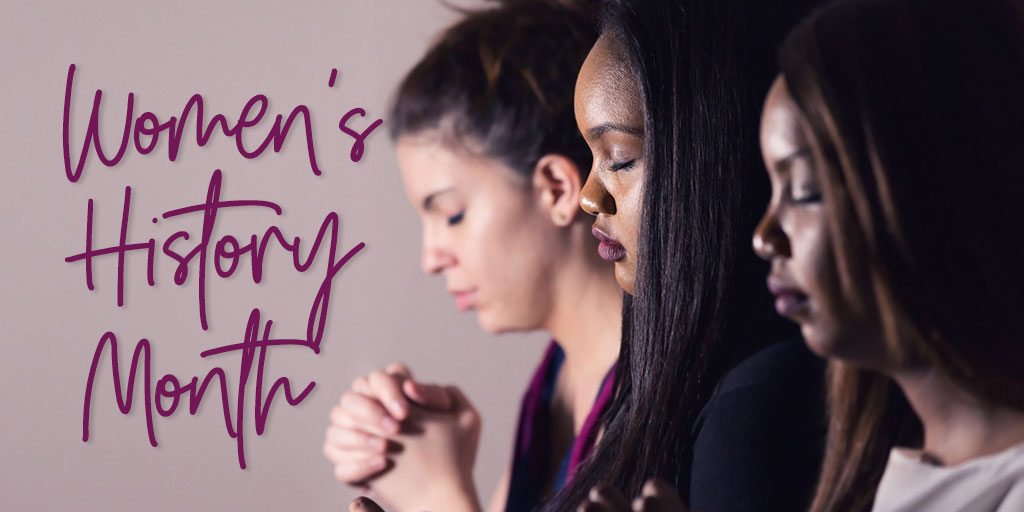 John Wesley, who was said to have been modeling the teachings of his mother, was the first within his movement to authorize a woman to preach, granting a license to Sarah Crosby in 1761. Fast forward 200 years, and Marjorie Matthews in 1980 became the first woman bishop, followed four years later by the first African American woman bishop, Leontine T. Kelly. Paving the way for these women were valiant and courageous forerunners like Barbara Heck, Sojourner Truth, Fanny Crosby, Harriett Tubman, Martha Drummer, Mary McLeod Bethune and many more.

March is Women’s History Month, and the United Methodist Church has built a rich tapestry of women’s leadership like Anna Howard who was a leader of the women’s suffrage movement, a physician and one of the first women to be ordained in the Church. This tapestry has also set the stage for new leaders to thrive.

One place that fosters that growth is United Methodist Women (UMW), which celebrated its 152nd anniversary this month. Its legacy was born out of a call to action made by Clementina Butler and Lois Parker in Boston on March 23, 1869, which involved informing six women members of the Methodist Episcopal Church about the desperate healthcare and educational needs of women in India. They raised funds to send Isabella Thoburn, a teacher, and Clara Swain, a doctor, to India. The meeting led to the formation of the Woman’s Foreign Missionary Society, the first of many Methodist women’s mission organizations to address the injustices imposed on women and girls in the 19th century. UMW is their successor.

The reverberations of their initial calls to action and the courage that has ensued ever since are seen in churches, hospitals and schools throughout GNJ. Here are two stories of two GNJ women working on the frontlines.

Sue Zahorbenski has always been a champion for social justice, especially for those whom society overlooks: the homeless, the hungry and those who are LGBTQ. Much of what she imparts into what she does comes from lessons learned from her mother, Deaconess Helen McCahill of St. Paul’s in Ocean Grove, NJ.

“My mom was in UMW, so I used to go to meetings with her in the evenings for the Schools of Mission (now Mission u),” said Zahorbenski who added that she relished those times so much she continued to attend while in college. Her mom is still involved in homeless ministry to this day.

Now as the new president of the GNJ UMW, Zahorbenski is ready to make a difference in the lives of those who need it most.

“The history of United Methodist women is so inspiring and exciting,” said Zahorbenski. “People like Pauli Murray make me proud to be a United Methodist woman,” she added, referring to the American civil rights activist for women and people of color who became a lawyer, Episcopal priest and author of books including the anti-segregation Methodist text called States’ Laws on Race and Color.

Zahorbenski said she is determined to keep UMW in the forefront, adding, “Being a presence at Annual Conference is one way to do that.”

She also said she’s working on bringing back awareness of inclusive language for local churches.

“We limit God when we don’t do this. Awareness and education are so important.”

In 2015 she was part of the group who brought reconciling ministries to annual conference. A diaconal minister since 1999, Zahorbenski has been involved in helping children, youth and adults, particularly in education and gardening.

In 2019 a grant from the General Board of Global Ministries to her church, UMC of New Brunswick, allowed her to lead along with retired schoolteacher, Karen Cox a three-year literacy project called “Write, Read, Achieve Power: The Literacy Project.” The project helps more than 500 students in New Brunswick.

Although the pandemic put that project on hold last year, she was able to use grant money so that her church could acquire wifi hotspots for a school in New Brunswick last fall.

“We want to be a beacon of light in downtown New Brunswick, a center of literacy, tutoring and other support.”

In addition to this role, for the past 15 years she has been an instructional aide at Piscataway Regional Day School, which serves children with special needs, ages 6-21. Appealing to the unique needs of her students, some days she is sharing snow from outside; other days she is teaching them how to garden.

Following years of four-dialysis treatments each day, she is treasuring the new kidney she received in Camden from a 30-year-old man who had died of an overdose.

“It was a beautiful kidney. But in order for me to live, someone else had to die,” said the 74-year-old deaconess at St. Andrew’s UMC in Cherry Hill. “That realization took me quite a while to overcome. I was eventually able to write to the family and express my immense gratitude.”

Manns, a chaplain at Virtua Hospital in Marlton, NJ, for the past 15 years and a deaconess since 2005, has had a passion for music her entire  life. From 1959 to 1973 she traveled throughout the United States and Europe as a musician. In 1970 she won the Philadelphia Orchestra Young Artist Competition. Although her musical career began on the piano as a child, her arrival at the University of Rochester awakened her passion for the harpsichord.

“I have tiny hands that are ideal for this instrument,” said Manns who due to a chronic repetitive stress injury in her hands and the birth of her first child had to put a stop to that career in 1973. She later donated her instrument to Rowan University.

“I did a lot of soul searching,” said Manns. “It was 1983 when I finally got back to seminary. I went back to where it all started, and that was church.”

“My biggest passion is to help people find their way through their muddle,” said Manns who added that by looking at someone for 50 seconds, she was able to know what to do to help them move forward.

Throughout her time at Virtua and while raising her children, Jennifer and Andrew, with her husband, Ernest, she has found a way to help others. In 2012 she started a mission to Hopkins, Belize for the purpose of raising the educational levels of students there.

“We brought with us seven suitcases full of supplies for a minimum of 25 children in the village. This included writing equipment, paper, scissors, coloring books, colored paper, mini pencils and crayon sharpeners, crayons, books, backpacks and some fun toys,” said Manns.

She added, “Sadly this was a drop in the ocean. This delightful village of hardworking people was by our standards lacking in many basic items. We returned home driven to fix the things we could and give direction to the things they wanted.”

In 2014 Manns returned with the group of volunteers from St. Andrews of Cherry Hill with the intention of creating a medical clinic as many of their ills had simple solutions.

“In the boxes this time were medical supplies from thermometers to surgical items donated by the local hospitals here,” said Manns. “I had walked them through by email what they needed to construct as a building with running water, refrigerator, a sterilization area, electricity and immunization needs. In the boxes were also a treat–dozens of lollipops.”

For a list of events and resources to commemorate the important month, visit the Washington.org website at https://bit.ly/3uGbH2q.