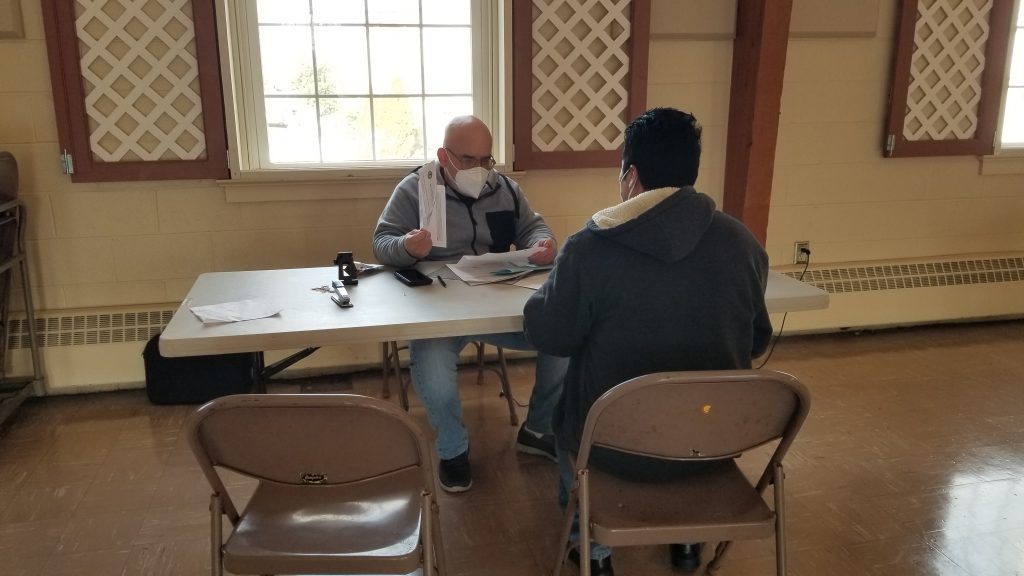 For the past 20 years, St. Patrick’s Day has brought back some fond memories for Rev. Ricardo Ramos, and not just because it’s his birthday.

“They played “Danny Boy” for me and clapped and then said, ‘you’re one of us,” said Ramos as he recalled his three years spent at Kearny UMC where in 2000, he became the church’s first non-English speaking, first non-Anglo pastor. “There were so many differences between us, but I said, let’s find a way to communicate, and we did!”

Throughout his 60 years of life, Ramos has been doing his best to communicate with others by building bridges of trust and digging deep into his creative toolbox to find ways to reach his neighbors or make strangers his friends…even if it means acting like you’re Irish for a day.

Now in 2021 as the pastor for both Trinity and First UMCs (FUMC) in Bridgeton where more than half of the population is Latino, the Puerto Rican native who started the first bilingual services in the Cumberland County church, said, “I find myself on a new journey, learning about new journeys, cultures and families.”

In February Ramos hosted the first clinic for the newly-formed Justice for Our Neighbors (JFON) of Delaware Valley, a ministry of hospitality that welcomes immigrants, refugees and asylum seekers as neighbors by providing affordable, high-quality immigration legal services, engaging in advocacy for immigrants’ rights and offering education to communities of faith and the public.

Sitting at the table that day at FUMC, he realized that without legal help, most of the people on the other side of the table would likely face ICE detention and then be deported one unexpected day, whether it was after spending a long day working in the blueberry fields or while making a long drive to a court appearance.

JFON’s main goal is to go where the immigrants work and live to eliminate the risk associated with travel. Even though New Jersey is a sanctuary state, detainees are often held for longer than the legal limit of 36 hours.

“I have a heart for the mission with immigrant communities,” said Ramos.

That day in Bridgeton was rewarding and impactful as JFON clients were counseled on how to navigate the legal system, but it also brought back memories from about 15 years ago when he was on the other side of the table at an immigration clinic hosted by the New York JFON.

The Delaware Valley chapter hadn’t been formed yet. In fact, it wasn’t even in the planning stage, but he needed help for his Bolivian wife and daughter. So they trekked into New York City seeking counsel.

“I remember it well. I was welcomed there not only because I was UMC clergy, but because I needed help for my family,” said Ramos who added that less than a year later both his wife and daughter were U.S. citizens.

Ramos’s original journey began in the same city about 40 years after his grandparents and parents had emigrated to the United States in the 1920s.

“I was born in New York City in a Jewish hospital on St. Patrick’s Day,” Ramos said with a laugh. Shortly thereafter, his parents returned to Puerto Rico where Ramos was raised.

In the late 1980s, Ramos traveled to La Paz, Bolivia, where he spent 12 years as a missionary. It was here where he met Rina who would become his wife. They adopted their daughter, Alejandra and then later Gina.

“I was a stranger in Bolivia, but the country embraced me. I’ll never forget how good that felt,” said Ramos (who later made a second trip to the South American country in 2015 as a General Board of Global Ministries missionary, working and leading in a local orphanage).

In the 1990s, he returned to Puerto Rico for several years before leaving again for the United States to study ministry at Drew Theological School.

With his calling and education in hand, he served as a local church pastor in Kearny, Elizabeth, Perth Amboy and Linden, where he continued to witness immigration issues that he struggled to fix.

“I was frustrated that I couldn’t provide them support,” said Ramos. “Now I see again how God works miracles. I’m finally really able to help them.”

Tom Lank, Northeastern Jurisdiction Volunteers in Mission Coordinator, is grateful for Ramos’ dedication and insight. For Ramos, he is relishing the opportunity to pay it forward. At First UMC, he has been building a tight-knit community that celebrates birthdays together and lends a helping hand wherever one is needed. Now they have yet another reason to reach out a hand.

“The clinic went very well,” said Lank. “We were able to serve 12 families and had 15 volunteers engaged throughout the day working on hospitality, intake, translation, document scanning and as attorneys (via Zoom).”

With plans to host a clinic each month, JFON Delaware Valley currently serves southern New Jersey, but they will expand to include the underserved rural immigrant communities in southeastern Pennsylvania, Delaware and Maryland’s Eastern Shore in the next several months.

When asked what a perfect world in God’s eyes looks like, Ramos said, “It’s a world where every person can be welcomed and embraced as children of God, where everyone receives the same grace and has a seat at God’s table.”

More information can be found at JFON-Delaware Valley.