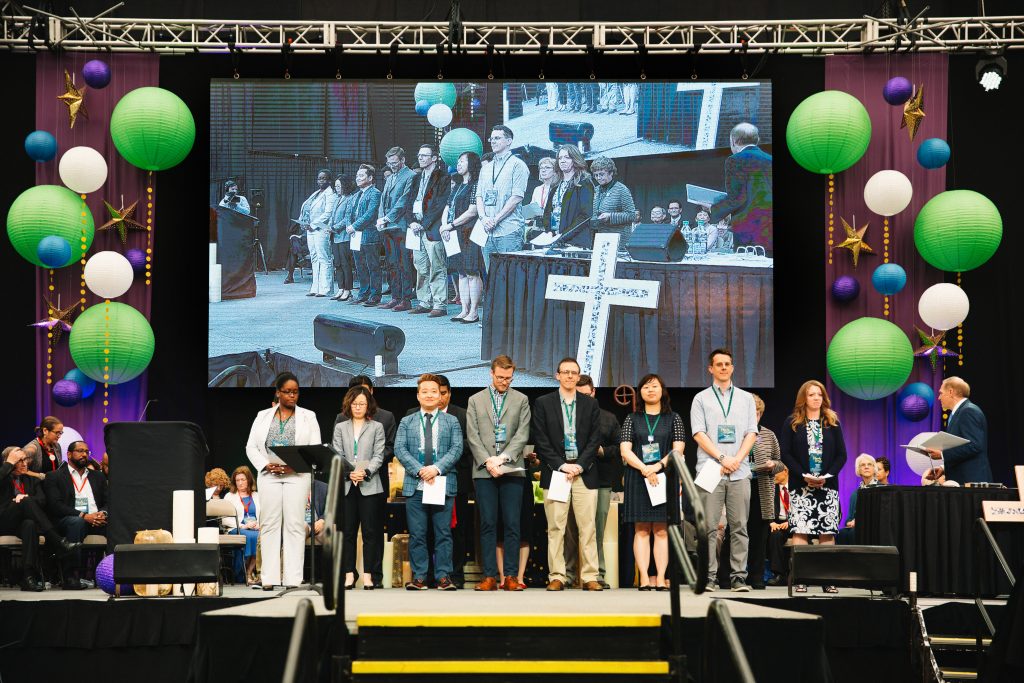 GNJ's newly commissioned and ordained stand together on stage at the 2018 Annual Conference session of GNJ in Wildwood last May. Photo by Shari DeAngelo

From South Korea to Peru, Pittsburgh to Philadelphia, Long Island and California, GNJ’s newly commissioned and ordained testify to God’s spirit in the eyes of the homeless living on the streets of London, friends in the islands of The Philippines, and rich Christian community at the University of Delaware.

In pursuit of authentic faith and through deep, probing and personal conversations with God; some filled with pain, grief, confusion, anguish, and inexpressible joy, they have bravely embraced the call that’s before them. Despite their vastly different stories and experiences, these disciples are bound by a common thread: the transformative power of Christ.

From working-class roots to globe-trotting journeys, overcoming violence and abuse to finding faith that’s personal, they bear stories of family and friends committing to them in prayer, boldly asking of God and working through their deepest fears to become the women and men they are now. For some it was in soup kitchens, prisons and hospitals where they found Christ and discovered God’s call on their life. For others it was during retreats they would have never gone on otherwise, through people who took the time to invest in them, and life-altering experiences that can’t be expressed in any other way but divine. They set out on a new journey and the next chapter in their life of faith. Get to know them here:

She has been appointed to Whitehouse UMC in Whitehouse.

He has been appointed to Princeton UMC In Princeton.

He has been appointed to First UMC in Williamstown.

She has been appointed to Covenant UMC in Plainfield.

He has been appointed to Korean United Methodist Church of South Jersey in Egg Harbor City.

She has been appointed to the UMC in Branchville.

Richard grew up in Lima, Peru. He served in his local church since age 15 and went to missions serving poor children for two years. When he moved to the U.S. Richard served his local church in youth and young adult ministries. Such service confirmed his call to ministry. While completing his Masters of Divinity studies he served at the Communities of Shalom Center as a community organizer.

He has been appointed to St. Luke’s UMC in Long Branch.

He started a youth ministry and student center in the U.S. and through this ministry realized he wanted to take it further.

He has been appointed to Evangelical UMC in Clarksboro.

He has been appointed to First UMC in Freehold.

Please pray for our newly ordained and commissioned as they continue their journey’s faith and serve their communities for Christ.