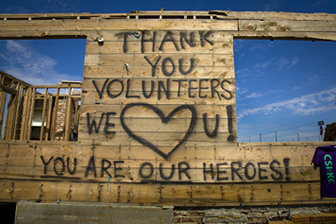 When Hurricane Camille struck the U.S. Gulf Coast with a vengeance in August 1969, numerous relief agencies rushed to the rescue of her survivors. The Category 5 storm, packing storm surges of 24 feet and winds in excess of 160 miles per hour, fractured communities and 300 deaths were left in her wake. While volunteers did their best to relieve those suffering in Mississippi and northward, Camille served as a wake-up call for others who realized that the silo approach to disaster relief was not working.

Up until that time, numerous governmental, private sector and nonprofit organizations served disaster survivors independently of one another. As a result, help came to the survivors haphazardly and sometimes not at all.

The same passion seen in 1969 from each agency still exists, but the overlapping of services and the inefficiencies they caused are no longer. Now in 2020, the disaster is the coronavirus, and VOAD is one strong force made up of nonprofit organizations, community-based groups, government agencies and for-profit companies working together using the 4 Cs–Cooperation, Communication, Coordination and Collaboration.

The approach is very different. While general volunteers are not being widely recruited because of the immediate threat this virus brings, there are opportunities to connect with another organization for training and future volunteer opportunities.

Under the umbrella of VOAD, the statewide partnership known as NJVOAD is sitting tight but poised to help as they closely monitor the pulse of this raging health crisis and share resources with others to keep residents of New Jersey safe.

“Our idea…is to bring [member organizations] together and help support them as they respond and help New Jerseyans everyday prepare for disasters,“ said Executive Director Keith Adams, who in late March issued a call for qualified health, mental health and health-related professionals to supplement the state’s healthcare capacity. Details are at covid19.nj.us/volunteer where there is a simple one-page inquiry form to volunteer.

Concurrently, A Future With Hope is also sitting at the table, collaborating and advising on the best ways for churches to engage in relief and recovery as they tap into all they gleaned while leading the disaster response in New Jersey in 2012 following the onslaught of Superstorm Sandy. Members of the team, alongside Tom O’Hearn, GNJ’s Disaster Response Coordinator, serve as representatives on the state, regional and national groups who are meeting weekly to provide guidance for how to engage volunteers and communicate needs.

The cohesive team is tapping into all resources they have, including a pile of leftover masks and other equipment from the Sandy recovery. Max Fisher, the Disaster Response Coordinator for the Capital District, uncovered some in tool trailers and donated them to a local fire department and rescue squad.

This prompted O’Hearn to check out their trailers, in which he found 300 new 3M safety masks. On March 25 he donated them to the emergency room at Ocean Medical Center in Toms River.

“When I entered, there were a dozen ER nurses and doctors waiting to greet me with smiles on their faces who couldn’t thank me enough. Our donation may not seem like much to us, but to them it was like getting a million dollars because it could save their lives,” said O’Hearn who among other missions spent several years working in Haiti following the 2010 earthquake.

O’Hearn added, “Many nurses and doctors are risking their lives without the proper protective equipment to help patients who are carrying a deadly virus and today, a few were extremely thankful, that our GNJAC made their lives a little bit safer.”

These waves of helping others reverberate from the coalition of groups as they reach out to the neediest the best they can.

But VOAD and the coalition of organizations weren’t always this organized.

Camille clearly taught relief and recovery groups that in order to be effective, organizations had to work together.

In 1970 seven national disaster response organizations convened for the first time to find a way to better coordinate responses and more effectively serve disaster survivors and their communities. The National VOAD was born, and the new approach to disasters–preparation, response and recovery—was created.

The state VOAD in New Jersey was founded in the late-1990s and put to the test in 1999 when floods ravaged Somerset County. Following a series of successful relief and recovery efforts throughout the state including the impact of 9/11, in April 2015, NJVOAD launched HELPNJNOW.ORG, an interactive, web-based resource providing education, direction, information and tools for people to help themselves and others better prepare for and respond to disaster. This site was developed in partnership with the New Jersey Governor’s Office of Volunteerism and the New Jersey Office of Emergency Management to meet several needs identified post-Sandy – specifically the post-disaster coordination of spontaneous unaffiliated volunteers and donated goods.

50 Years Later
Today, National VOAD is a coalition of 56 of the nation’s most reputable national organizations (faith-based, community-based and other non-profit organizations) and 56 State/Territory VOADs, which represent local/regional VOADs and hundreds of other member organizations throughout the country.