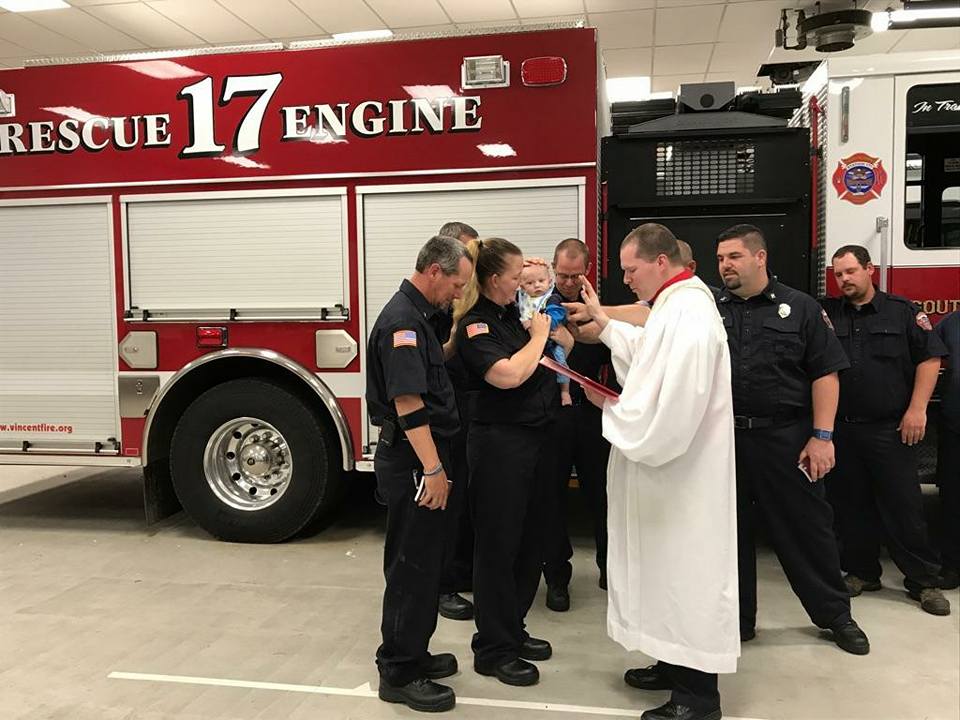 Rev. David Ledford of Vincentown UMC along with 30 congregants came together to bless the firefighters in their community. Photo provided

VINCENTOWN – The mood of the evening was one of celebration and joy as approximately 30 members of Vincentown UMC gathered in the church parking lot on May 30 and then walked jubilantly down the street together to the Vincentown Fire Company. Joined by Senior Pastor, Rev. David Ledford, the group approached a short time later and were greeted by almost two dozen members of the firehouse, who eagerly awaited their arrival. As each firefighter was given a pocket-sized Bible, Ledford led more than 50 people with a prayer and devotion. And as the church members extended their hands forward and their colleagues laid hands on them, each firefighter was blessed by Ledford during the 30-minute service.

According to Ledford, this is the first time such an event was held and it was met with great enthusiasm by all who attended.

“Nobody really knew what to expect. The Fire Company expressed incredible surprise and excitement that so many members of our church came. Many of the firefighters knew people from our church, so it was nice to see familiar faces. I think all were happy to be blessed,” he said.

Ledford, who has been serving as the Pastor of Vincentown UMC for the past year, added that when he moves to a new church, he contacts local officials, schools, and first responders to see if there is any way in which he can assist them.

“I have experience in chaplaincy at two different hospitals and was a clergy member of a police department in a previous town, so this is a passion that I try to bring to every church I serve,” he said. “It took a few months to develop, but the firehouse responded to my request and expressed their desire to name a new fire company chaplain. On the church side, the members thought it would be nice if we had some pocket-sized Bibles to give them during this event. Our church council approved the purchase of 200 Bibles to give out.”

Although Ledford was the primary force behind the event, he credits the church laity and the fire company leaders with helping to make it work.

“During the service, I blessed approximately 20 firefighters. I spoke to those gathered about Saint Florian, then Patron Saint of Firefighters. I mostly spoke about what we can accomplish together to fulfill our common goals as community servants. A major aspect of my message was about how we as a church are here for them when they are in spiritual or emotional need. I can say ‘we are here for you’ as much as I want but if no one is with me when I say that, it can be seen as an empty promise. But when I stood there and said, ‘we are here for you’ as there were 30 people from our church standing with me, then it really meant something,” he said.

At the end of the service, the Vincentown Fire Department officially announced Ledford as their new chaplain.

“I hope to use my new role to assist the firefighters in dealing with trauma, spiritual and emotional challenges and prayer. This experience was so much more than I could ever have hoped for. What started out as me going to bless the badges turned into 30 church members coming with me and the firehouse members responding by installing me as their chaplain. The job of serving a community is a difficult one. But when the church and the first responders join efforts to do it together, we can do so much more than either of us ever could do on our own,” he added.

Ledford said that he would like to continue this tradition every year at the firehouse and other first responders’ headquarters.

“I believe that all in attendance are hopeful for the future work we can do together and are comforted in knowing that they will know where to go if they ever need spiritual or emotional support and guidance. This event created a new relationship between the firefighters and the church community that will continue long into the future,” he said.