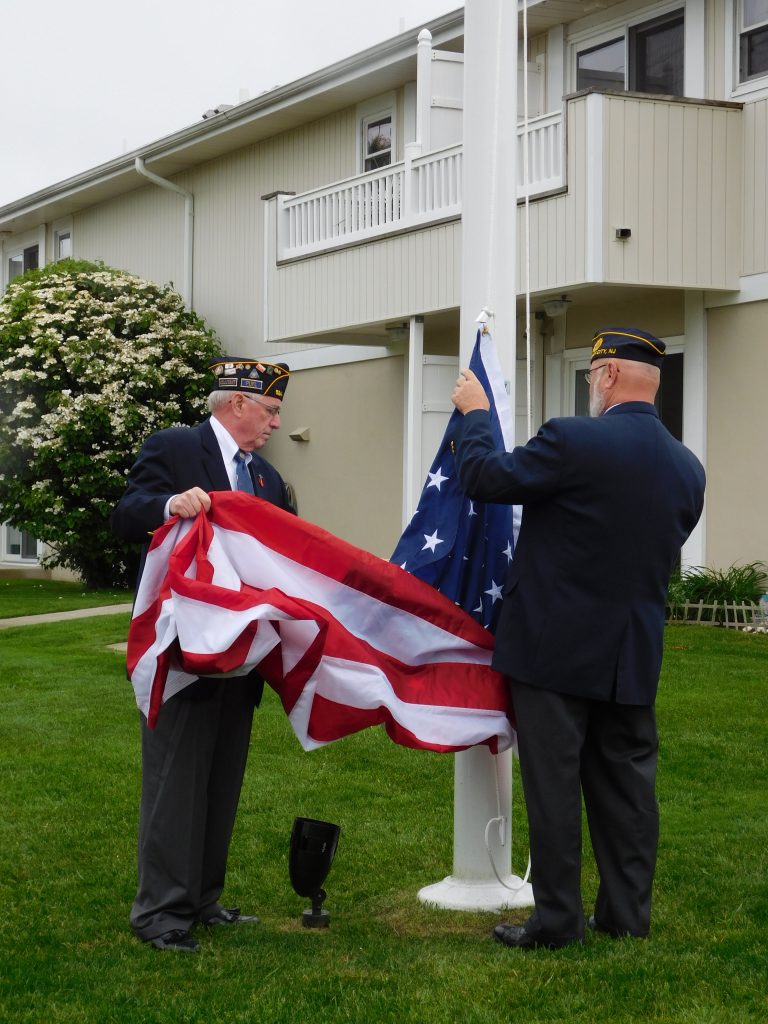 American Legion Post 524 Adjutant Jack Hagan and Service Of?icer Tom Tumelty, raise the ?lag on the newly-dedicated ?lagpole at United Methodist Communities at Wesley by the Bay in Ocean City

(Ocean City, NJ) — Although published in 1917, the words in Wilbur D. Nesbit’s poem, “Your Flag and My Flag” continue to resonate in the hearts of service veterans, especially George Benner, a resident of United Methodist Communities at Wesley by the Bay. His dream for the Ocean City senior community to proudly display the American flag came to fruition on May 17.

Benner, a Vietnam Veteran who served in the U.S. Navy and describes himself as “very patriotic,” reached out to civic, veteran, healthcare and other organizations. He also wrote a letter to United Methodist Communities President and CEO, Lawrence Carlson, who responded favorably. For almost two years, the Resident Council of United Methodist Communities at Wesley by the Bay discussed ways to secure a flagpole for the Bay Avenue side of the complex.

Over the winter, Gary Engelstad, annual giving officer of the United Methodist Communities Foundation, reached out to Wesley by the Bay’s vendors.  AllRisk generously responded with $2,500 donation for the flagpole, setting plans in motion for a spring dedication.

The May 17 dedication ceremony began with a welcome from United Methodist Communities at Wesley by the Bay, Housing Administrator and emcee for the program, Deede Bolger. St. Peter’s UMC senior pastor Rev. Stephen Donat offered an invocation recognizing the flag as a historic symbol of freedom, truth and one nation under God. Bolger thanked Benner, who read “Your Flag and My Flag.”

“We are celebrating today primarily because of George Benner’s unending effort to secure a flagpole. Congratulations on a noble vision coming to fruition,” she announced.

During the remarks segment, New Jersey State Senator Jeff Van Drew stated, “It represents an extraordinary nation with religious freedom and opportunities for education and mobility.” He further cited, “The flag is one of the most visible ways to let others know we stand by our country and tell men and women veterans we support and appreciate them.” He spoke of sacrifice and his esteem for Assemblyman Robert Andrzejczak, a legislative colleague and Army veteran who lost his left leg while serving in the Iraq War.

Mr. Carlson thanked Christine Messina, AllRisk’s senior vice president of sales and marketing, and her team. “They give back to the neighborhoods and regions they serve by supporting diverse organizations which improve the quality of life.”

Messina thanked guests and quoted President Harry S. Truman, saying, “Our debt to the heroic men and valiant women in the service of our county can never be repaid. They have earned our undying gratitude. America will never forget their sacrifices.”

Ocean City American Legion Post 524 Adjutant Jack Hagan, and Service Officer Tom Tumelty, presented and raised the flag. Led by John Pimpinelli, a Wesley by the Bay associate, attendees recited the Pledge of Allegiance while all joined in “The Star Spangled Banner” directed by Pam Walker, care coordinator of United Methodist Communities at The Shores.

During an informal outdoor reception after the event, resident Clair Delaney beamed, “I think it’s fantastic. It brings a tear to my eye. Thank God for it and all the people who set down their lives for their country.”