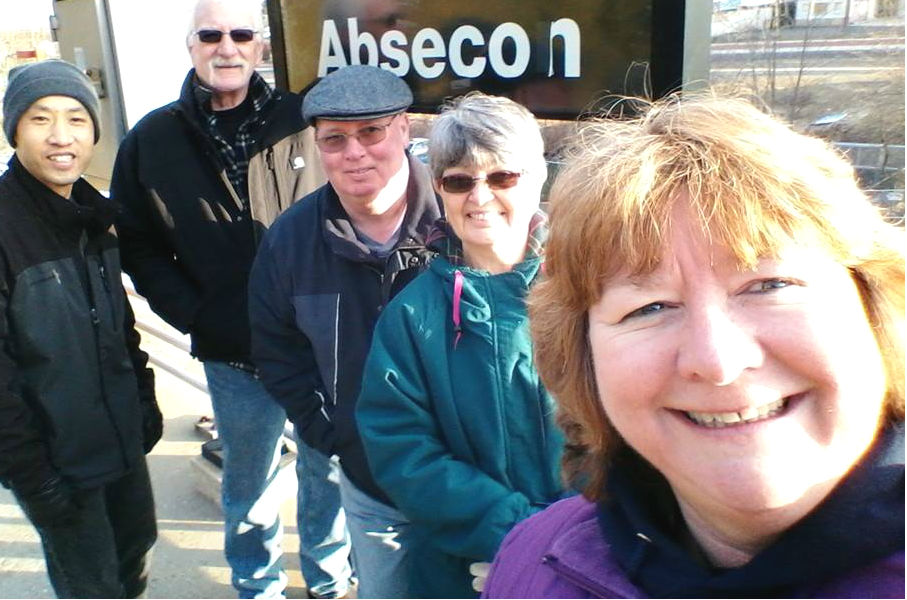 “We went back for Lent because we had such a very good experience with people the first time,” Absecon Lay Leader Barbara Sabath said. “We wanted to continue that and our team that went loved it. It was a real good witness and outreach.”

The group from Absecon would show up at the station at 6:30 a.m. and stay until 9:10 a.m. to greet people boarding the train to Philadelphia. Sabath said some church members who couldn’t come helped pack the 100 bags with a muffin or granola bar as well as some information about the church.
“Some weeks we would give out all 100 bags, but usually it was between 85 and 90,” she said. “We were very, very blessed. We had conversations with people going to Jefferson Hospital for surgery, and they would ask us what was up. We would say can we pray for you, or they would ask us to pray for them.”

But those weren’t the only kind of conversations that took place.

“One week we had a college student we talked to, and then the next week he came back and said he was considering God in his life,” Sabath said. “It was kind of neat because the stories would continue on each week sometimes. And then some of us would see people that we knew from time to time, too.”

Sabath also said there were at least two people who asked for Bibles one week, then returned to have them given to them the following week.

“We knew we had some relationship building to do,” she said. “A couple of people wanted Bibles so the next week we were able to give the Bibles to them. There were a few who would say good morning, but didn’t want anything and that was fine, too.”

Sabath admitted that some members weren’t sure how they felt about participating in this kind of outreach. In the end, they admitted it worked out pretty good.

“For some of our people it was a brand new thing,” Sabath said. “For some, it was really stepping out of their comfort zone to do this. They realized that once you do it, it’s not as hard as they thought. They engaged in conversation with what people’s needs were and they became really invested in this.”

Sabath said about four of five church members would come out each week all between the ages of 25 and 70.

“Some came early with us and then went to work,” she said. “We were just a few blocks from the church. We could point out the church’s steeple from the train station.”

Sabath said that Bishop John Schol’s original Advent challenge relayed to the church through Cape Atlantic District Superintendent Brian Roberts was one the church simply could not afford to pass up.

“When we saw the challenge, we said we have to do this,” Sabath said. “We are in Absecon and we have a train station, so we can’t not do this. So we put it out there and we had four or five come out the first week and they were excited about it.”