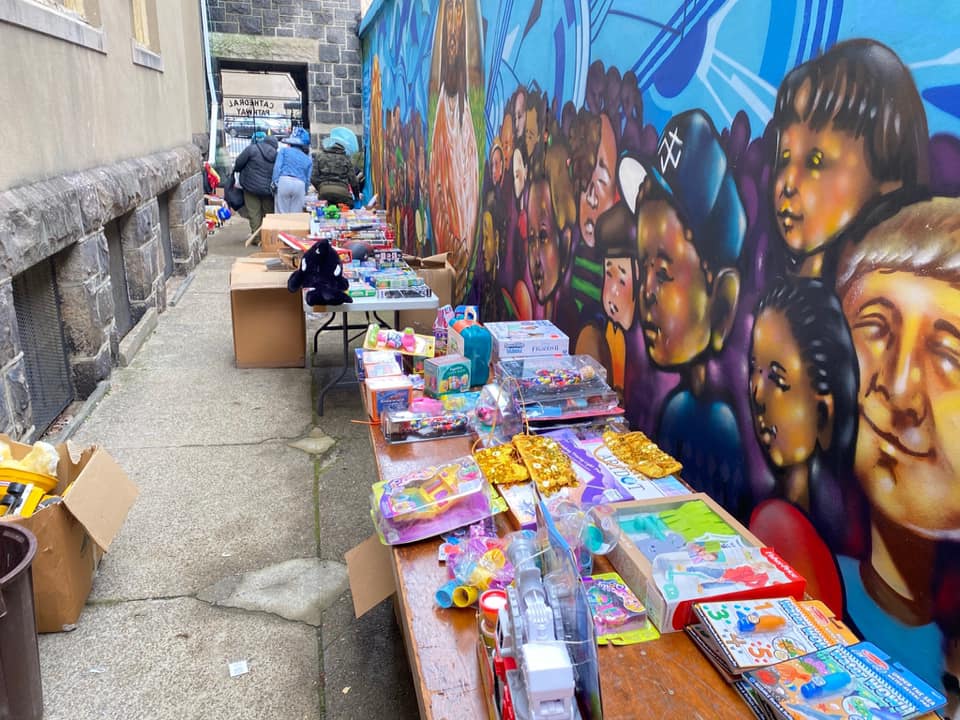 “Two are better than one, because they have a good return for their labor: If either of them falls down, one can help the other up.” Ecclesiastes 4:9-10

The energy and richness that comes with 250 years of memories swept through the sanctuary of Turning Point UMC at 15 South Broad Street in June as a blend of different cultures, ideas and backgrounds joined as one to make new memories as the New Hope for Trenton Parish Ministry. On this corner, where a colorful mural filled with people of color contrasts the hard cement, where young mothers hold the hands of their children while accepting food for their families, and where 40 years of memories of feeding the hungry pour out onto the busy street, change is happening for the congregations and the community.

“It’s collaborative ministry at its best,” said Turning Point’s Rev. Rupert Hall, who has been affiliated with the church for the past 14 years following two different careers in law and finance, starting as a lay person and then as its pastor for the past five. For all those years, Hall has been dedicated to welcoming strangers as friends, from counseling men in the community and leading an impromptu prayer station on the sidewalk, to feeding the community and working toward instituting change.

The congregations of Turning Point and African UMC, led by Rev. Moses Jarta Flomo, now both worship under the same roof following a trial run this past Easter Sunday, and in May they welcomed The Village Deaf Church NJ’s Pastor Emmanuel Jean-Jacques Sterlin and their members, to also congregate at 15 South Broad Street in the heart of Trenton. Currently, there are about 28,000 deaf people in Mercer County alone, Hall noted.

“We want to draw in the community with more outreach services, like homeless, employment, advocacy and job replacement resources for the deaf community,” said Sterlin, adding that they hope to also offer sign language classes in the future.

Hall, a native of Pasadena, MD, cited location, ample space and parking as sustainable solutions Turning Point can offer to alleviate problems plaguing the city and to provide African UMC a safe and spacious place to congregate. African UMC brings new cultures from its large congregation who are mostly of Liberian descent, a vibrant music program and its door-to-door “old-fashioned evangelism,” which earned the church the One Matters Award in 2020.

Together, they bring a transformational ministry and a strong Black history that will amplify ministry and bolster the impact they make on the community. Sharing the costs of expenses like utilities and building maintenance will allow the two congregations to grow in vitality and give them more time for discipleship.

“It is going great. We wonder why we didn’t do this sooner,” said Flomo who emigrated in 1994 to the United States. “We are combining our efforts to have a greater impact. This is an opportunity for our congregation to maximize resources and be together in ministry.”

The partnership between the two churches, which was created along with the help of Capital District Superintendent, Rev. Hector A. Burgos, also offers a sustainable solution to a city still reeling from the year plus-long pandemic.

“Over a period of three months, a team comprised of leaders from both congregations met to pray and engage in strategic conversations to assess and reimagine our connectional ministry in Trenton,” explained Rev. Burgos. “Throughout this discernment process, I have been inspired by the desire of these two congregations to join forces to increase their missional impact in the community. The vision for the New Hope Parish Ministry is to provide a unified, multicultural, multilingual, multiethnic and multigenerational United Methodist missional presence in the city of Trenton, that provides radical hospitality to the community, nurtures disciples who make disciples and transform the community through Christ’s healing love,” he added. “I look forward to witness the continued development of this initiative and the learnings we garner that we can transfer to other missional locations in the district and GNJ.”

“And we all still have plenty of space,” said Flomo who added that he would love to make disciples among the deaf community, strengthen the food ministry even more and possibly entertain the idea of adding a daycare center in the future.

In the meantime, the mission of feeding the hungry will continue to be a busy one. Groceries are distributed every other Wednesday and third Saturday, at which time books are also shared as part of a collaborative effort with Urban Grace, an affiliate organization of Showing Up for Racial Justice. Until the end of July, dinner is served on Tuesday and Thursday.

The tradition of feeding the community at 15 South Broad Street started 40 years ago when the Trenton Area Soup Kitchen (TASK) was founded. In the early 1980s, TASK was serving over 50,000 meals a year.

“It’s all about turning hunger into hope,” said Hall who is also the president-elect on the board of the affordable housing project known as Kingsbury Towers and was also recently asked to be on the board of TASK.

That hope is also evident in what is now a blended congregation.

“We get to share our Liberian culture with them, some of whom are also Liberian and family members of our own congregation,” Flomo said, as he spoke of his large congregation in which nine dialects are spoken. He noted that the Turning Point UMC lay leader is also Liberian.

But the road to get to this partnership has been a long and windy one. Hall recalled while attending Magothy-Mt. Zion Methodist Church in Maryland in 1968 the United Methodist Church was formed. He remembers how a once segregated church was now blending with other congregations.

Flomo first came to the United States in 1994 on a scholarship to Wesley Theological Seminary in Washington, D.C. He has a Diploma in Theology (Master of Divinity equivalence) from the Gbarnga (barn’gah) School of Theology – a United Methodist seminary in Gbarnga, Liberia. He served in Liberia for 10 years before emigrating.

Flomo also volunteers as a chaplain of the Burlington City Police Department; coordinator of Team Builders Community Development Corporation – a 501 (c) 3 community development organization; and founding member and chaplain of African Immigrant Community of America, also a 501 (c) 3 organization dedicated to improving the lot of African Immigrants in the United States.

But long before a young artist named Leon Rainbow painted the colorful graffiti-style mural outside the church in exchange for a room where he taught painting to the community, Turning Point’s story began in 1771, five years before George Washington crossed the Delaware River for the battle against the British, which has come to be referred to as the “Turning Point” of the War of Independence. The city on the Delaware was about to be the capital city of the United States (1784).

It was also at that time when 19 people were meeting in Burlington, NJ, in an effort to deepen their Christian Faith in a manner as suggested by John and Charles Wesley. Known as “classes,” this movement later became known as the Trenton Society after the decision was made to move the group to the urban area. Francis Asbury was there as the first block was laid in building the church.

Fast forward to 1894, and the fourth and final structure was built to meet the growing demand of the community. The new building, with a capacity of two thousand, was dedicated on May 5, 1895. GNJ’s oldest church and one of the oldest churches in New Jersey, Turning Point was named in 2007 following the merger of the First United Methodist Episcopal Church, also known as “the Mother Church,” and St. Paul’s UMC.

In between in 1957, the church was almost destroyed by fire, but the passion for ministry was not extinguished. Now 64 years later, the church remains a beacon of light and hope in Trenton.

As these two pastors and their congregations embark on a new opportunity, there is no doubt it will be a transformative one. The 250th anniversary celebration being planned for next year promises to be one of collaboration, spirit and revelry.

Our thoughts and prayers are with Moses, his wife, Saba (meaning “gift”), their four children and the entire family following the death of Moses’ mother, Nyanman Farr in Liberia this past June. The mother of 14 was 90.