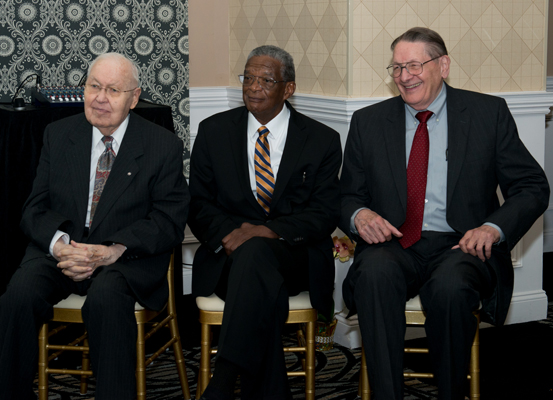 “Seek the shalom of the city where I have sent you, for in its shalom, you will find your shalom.” –Jeremiah 29:7

It was 1967 and Wilbert Mitchell was teaching sixth grade at Sewell School in downtown Camden. He was not only active in the classroom but heavily involved in the school’s PTA and furthering his own education. Just shy of his 30th birthday, the young man from Camden who had always had dreams of making lives better for the people of his community was asked to be the executive director of a new nonprofit in the city, though Mitchell today jokes that it only happened because everyone else said no.

Now looking back on those 54 years and ahead to what his recent retirement holds for him, Dr. Mitchell reflects on what that time meant to him.

“In 54 years, there wasn’t a day when I did not have the opportunity to serve an individual or family. That was quite an honor,” said Mitchell. “We accomplished what we wanted to do,” he added as he reflected on the early days when he along with Rev. Dr. Charles Sayre and Dr. Stanley Menking started to create services for a needy community, with their main priority being to provide childcare so parents were able to get back to work and get the training they needed to grow their careers.

Camden in the late-1960s was burdened by an economic stagnation and deindustrialization. With the significant drop in jobs came a sharp downturn in the population as many of the middle class moved out to the suburbs to find employment and a better life. The poor, including many African Americans, stayed. As targets of a long history of job and housing discrimination, they had little choice. Crime and violence rose, exacerbating simmering racial tensions and leading to the two race riots.

Needless to say, the city was ripe with a need to get stronger and revitalize.

For the past five decades throughout these challenges, Respond Inc. has had the common goal of helping people throughout the Camden community help themselves. Collectively, the group digs deep to give people the tools and support to overcome deeply rooted challenges, from poverty and drug addiction to a lack of education or training, affordable housing and job loss.

Today, the nonprofit on State Street delivers services throughout the city in job training and job development, childcare and early childhood development, summer youth employment readiness, affordable housing and home buying, elder care, assistance to the homeless and much more.

But 54 years ago, it started as a grassroots organization looking for a solution. While working at the UMC in Haddonfield (HUMC), a nearby suburban town inhabited by many former Camden residents, Rev. Dr. Charles Sayre, who died last year, became aware of the desperate needs of families in Camden. He mobilized churches throughout the region to support churches in Camden and assigned Stanley Menking to represent HUMC as the Minister of Mission at the church.

It was a joint venture of residents of the North Camden community and HUMC. The church assigned Dr. Menking to meet with neighborhood residents in North Camden. A survey of needs was undertaken and childcare for parents who were in school or training for employment became the highest priority.

The childcare project was incorporated in 1968, with two programs in operation, the first continuing at a space in the State Street UMC at Sixth and State Streets where a half-day preschool started a year earlier proved to be insufficient to meet the inordinate needs of parents; and a second, the Linden Street Day Care Center, opened at 9th and Linden Streets. The two schools, which served 90 children, remain in operation today.

In 1972 and 1974 the State Street Housing and the Community Elders Council were created. The Summer Youth Career Exploration Program, the Summer Enrichment Camp, the Teen Volunteer Program and Youth Advisory Board followed over the next two decades.

A weekly intergenerational workshop at the Elders’ center in partnership with members and staff of the Philadelphia Orchestra was also launched for children, senior citizens, adults and families.

“I enjoyed taking old buildings, renovating them and transforming them into childcare centers and places of learning,” said Mitchell.

Respond opened the PATH Homeless Day Center in 1989 in response to the community’s need for a facility offering essential services for homeless men, such as case management, education services, employment assistance and job training, life skills training and referrals for substance abuse and mental health treatment for single, adult males and females, including veterans, who lack or will lack a fixed regular and adequate night-time residence.

Year after year, Mitchell led these new building projects with enthusiasm, diligence and a team of dynamic people, some of whom started as clients, like LaToya Jones whose connection with Respond began as a baby at one of its childcare centers. Years later, she sent her daughter to one of the centers, and today, she is a school nurse for Respond. Her story resonates with many who stay connected to Respond after seeking their help.

“One of them became a lawyer (LaTonya Bland-Tull, who is also a board member), another one of the first Black captains on the Delaware River,” said Mitchell who was also quick to remark that 75% of Respond’s employees live in Camden. Mitchell is among that list.

But it wasn’t just Mitchell’s keen vision and passion to help others that led to Respond’s extensive growth over the past five decades. During his tenure, he was instrumental in securing grants exceeding nine million in foundation dollars, which helped to facilitate the construction of playgrounds at the agency’s city childcare facilities and a job training center in North Camden providing training in Culinary Arts, Automotive Technology and Adult Education. One grant from the William Penn Foundation totaled $1.2 million, making it one of the largest ever rewarded in the state.

Mitchell also recalled the project, facilitated by then Gateway South District Superintendent Bob Costello, that led to a grant several years ago to fund more training programs that Dr. Sayre was most proud of.

“All five ethnic churches in Camden worked together to get this done. This had never happened before,” said Mitchell.

Amid all the building, Respond also concentrated on making communities cleaner and healthier. Respond’s Clean and Green initiative began with 200 lots in the summer of 2010 and expanded to include the entire neighborhood in the summer of 2012. It helped improve the quality of life in North Camden by cleaning up vacant lots, creating new open spaces and training residents in landscaping, gardening and painting.

When superstorm Sandy struck the East Coast, Bishop Schol asked Mitchell to help lead the team to rebuild homes for about four months. Today, he remains on the board of A Future With Hope.

Respond and the community of North Camden are also a Community of Shalom, an initiative began in 1992 at the General Conference of the United Methodist Church.

Through this partnership, they focus on the creation of economically and ecologically sustainable communities of peace, hope healing, harmony and wholeness in which all God’s people experience shalom by supporting local congregations and community residents as they work together to renew community life.

Since that day in 1968, Mitchell and Respond have received more than 50 awards. Among many awards and proclamations, the NJ Department of Human Services awarded Mitchell the distinguished Aletha Wright Award for Excellence in Child Care and Early Education in 2013 and an honorary Doctorate in Humane Letters from Drew University and the Apple Award for its many contributions to the city, both in 2012. In 2019 Respond was given the Camden Legacy Award and Mitchell the Lifetime Achievement Award by the Campbell Soup Company on its 150th anniversary.

For Lofton, he fully realizes he has pretty big shoes to fill, but he’s up for the challenge as only the second executive director at Respond. Calling himself “the adopted son of Camden,” the Philadelphia native, who laments that finding a good cheesesteak is a challenge too hard to bear, is embracing the challenge that Respond brings with enthusiasm, vigilance and hope.

“Everyone has a gift. What Respond does well is tapping into that gift,” said Lofton who added that he hopes the organization can expand its outreach and venture outside its comfort zone. One of his goals will be to rehabilitate some of the vacant buildings in the neighborhood and focus on first-time homeowners, financial literacy and building new resources.

Lofton is no stranger to making young lives brighter. He brings with him extensive experience working with youth, having worked at Big Brothers Big Sisters and Better Tomorrows. In the early 90s, he even served as a Big Brother.

He has an MBA from DeVry University and a proven track record in fundraising, fiscal management and program administration. Lofton has also demonstrated his commitment to the community by volunteering his time and talent with several nonprofits engaged in youth and children’s services, homelessness and community development.

When asked if he was planning to change the longtime motto, “helping others to help themselves,” Lofton said unequivocally no. “That’s what we are all about. We are about hope, a place where people can lift themselves and walk with their heads held high.”

In addition to being committed to his new community, Lofton said he is also working with his staff, making them feel like they matter and that they can be a collaborative and empowered person.

“My goal has been to be more transparent and communicative with my staff on a regular basis and make them accountable,” said Lofton who added that he regularly lets others lead meetings and share their ideas.

He said he is amazed by the longstanding commitment of some of his employees, including Migdalia Polo, who started as a tenant and then teacher’s aide over 40 years ago before becoming the director of early care and education.

“She has helped so many kids in our programs and then hired them later,” said Lofton.

“She is fiercely protective of this organization.”

“We’re becoming a cohesive team,” said Lofton who added that he is planning to give back to his team this December by hosting a big holiday party.

When asked what he plans to do in retirement, Mitchell said he would like to rest. But a recent visit to the doctor, much to his dismay but with a smile, revealed that Mitchell is in top health and the excuse to slow down he had hoped to gain from the visit was not to be.

An event to commemorate Dr. Mitchell’s 54 years of service is planned for September 18, 2021, at the Haddonfield UMC.