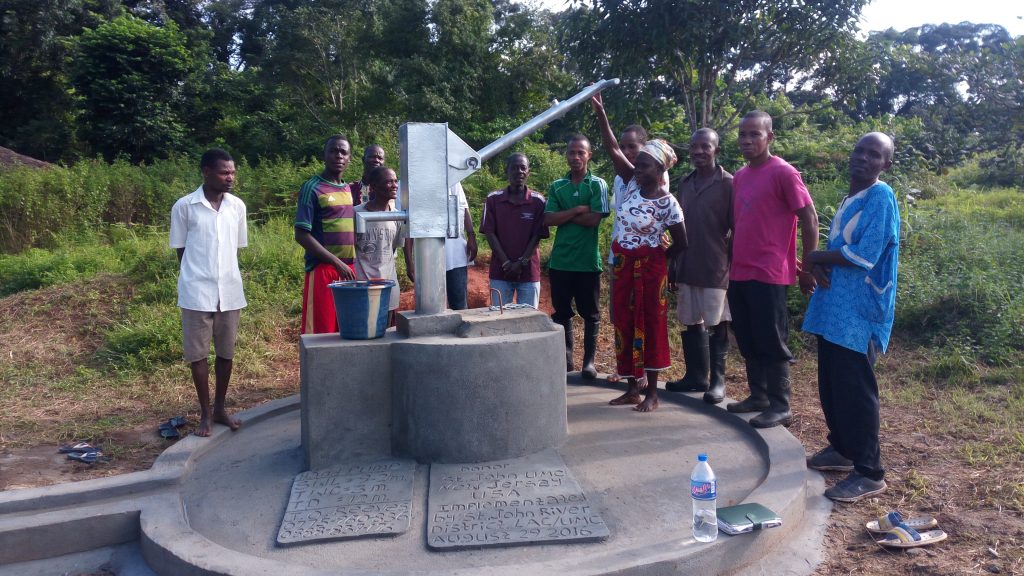 For the third time, St. John’s UMC in Hope, N.J., answered the call to raise the funds needed for a well to be dug in Liberia. They had been inspired by Katherine Court-Manning, who, several years ago, had gone to the Camphor Mission in Liberia to help improve their education programs. What she experienced there touched her heart deeply. She came back and spoke to St. John’s about her time, mentioning the extremely poor water quality in most villages, the low cost (to Americans) of a well and that most villages typically lost four to five babies a year due to water being used for baby formula.

This touched the hearts of folks at St. John’s and a mission campaign was started to raise the $2,000 needed for a well. The first well was dug Mayesville, a village near the Camphor Mission.

Reflecting on the generational impact this well would have on the lives in that village, St. John’s felt moved to raise funds for a second well. The second well was dug in the Borzohn Community, in Grand Bassa County, Liberia.

St. John’s mission team, at that point, felt they had ‘done enough’ in Liberia but it seemed the Holy Spirit wasn’t done with them yet.

As their mission team was in prayer and conversation as to what mission to focus on next, the only comments repeatedly stated were about the babies that would be saved and the lives that would be improved by the wells that had been dug. So, taking this as a sign, a third campaign was started and is now complete. St, John’s has raised the necessary funds for a third well to be dug in Liberia. At this time, the church doesn’t know exactly where it will be dug but feels blessed to be a blessing to their brothers and sisters in Liberia.

Through this, St. John’s has formed a strong connection with the East Ohio UMC Conference, where Court-Manning is from, because of their connections in Liberia to make this happen.