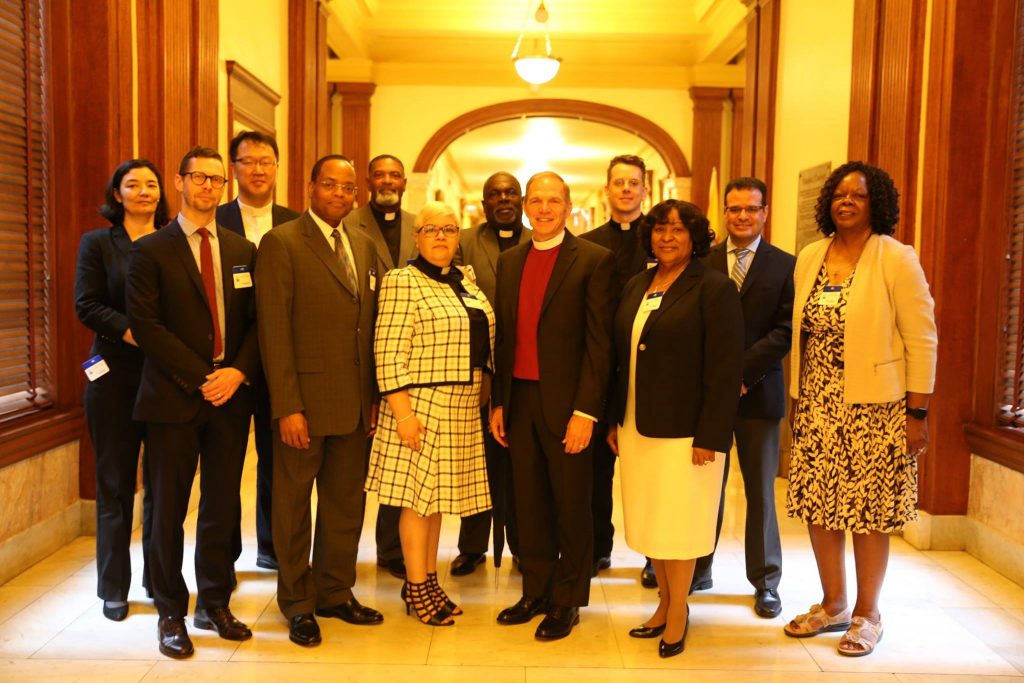 The State of New Jersey has created and followed laws, policies, and practices that require, with very limited exceptions, students to attend public schools in the municipalities where they live. This and other longstanding state practices have fostered and enabled residential segregation that deny 250,000 Black and Latino students, the benefits of an integrated education and the possibility to develop to their full God-given potential.

According to the U.S. Census, the state of New Jersey is ranked as the 4th most diverse state in the U.S. and yet a report from the UCLA Civil Rights Project in 2017 ranked N.J. with the 6th highest rate of segregation of Black students and the 7th highest rate for Latino students in the country.

“I give thanks to God for GNJ’s leadership and the witness of GNJ as we work together for a more just education system that provides equitable opportunities to all students,” said Rev. Sang Won Doh, Chair of the GNJ Connectional Table.

The lawsuit is being organized by The New Jersey Coalition for Diverse and Inclusive Schools (NJCDIS), a nonprofit organization led by Justice Stein and Bishop John Schol who have been working on issues of school desegregation in New Jersey.  The United Methodist Church of Greater New Jersey along with Latino Action Network, the Latino Coalition, the NAACP New Jersey State Conference and other organizations are filing the complaint with the ______ Court.

“GNJ, as a body of Christian believers, is charged with being a moral compass in the advancement of civil and human rights for all people,” said Rev. Vanessa Wilson, Senior Pastor of Magnolia Road UMC in Pemberton and Chairperson of GNJ’s Commission on Religion and Race. “Looking back to the landmark case of Brown v the Board of Education, we know that separate is not equal. By signing on to this legislation we affirm that every child has the right to an excellent educational experience regardless of race or socioeconomic status.  Moreover, it is well established that racially and socioeconomically integrated schools benefit all students. It provides a richer learning experience and increases the cultural awareness of students and staff.  A solid, well-resourced education is the greatest gift we can give to any child, as well as to our state and our nation. New Jersey is a very diverse state; additionally, all are impacted and influenced by globalization. In order to prepare our children for be contributors and leaders in their communities, the nation and the world, now more than ever, New Jersey classrooms must be a reflection of New Jersey’s rich diversity.”

The lawsuit was filed on May 17 to coincide with the 64th anniversary of the United States Supreme Court’s decision in Brown v. The Board of Education of Topeka, Kansas which held that “separate educational facilities are inherently unequal” in that they “deprive the children of the minority group of equal educational opportunities.”

“This important issue is aligned with our denomination’s social principles,” said Bishop John Schol. “As United Methodists we have always been out in front of social issues and this is exactly what we should be doing right now.”

The denomination’s social principles state “We believe that every person has the right to education.  We also believe the responsibility for education of the young rests with the family, faith communities, and the government.  In society, this function can best be fulfilled through public policies that ensure access for all persons to free public elementary and secondary schools and to post-secondary schools of their choice.”

In addition, the United Methodist Church’s 2016 Book of Resolutions addresses this issue and states that “we must address with prayerful determination the issues of race and class that threaten both public education and democracy in America.”

Relief being requested by the complaint seeks to declare New Jersey’s longstanding and intensive segregation of Black and Latino public-school students to be unlawful and violative of the state constitution. It seeks to declare an essential mandate that state school children attend public schools in the municipality in which they reside, as unlawful and also violative of the state’s constitution. In addition, the lawsuit seeks to declare mandates that charter schools prioritize enrollment of students from the district in which they reside, as unlawful and violative of the state’s constitution. Rather than ordering the continued assignment of public school students, including those attending charter schools, on the basis on municipal attendance boundaries, the lawsuit seeks to mandate that the Legislature, Commissioner of Education and the State Department of Education adopt a replacement assignment methodology that will, in a timely manner, address and remediate racial segregation in the state’s public and charter schools.

The complaint orders the Commissioner of Education to prepare and submit to the court within three months, a detailed and comprehensive statewide remediation plan designed to achieve substantial desegregation and diversification of the state’s public schools.

NJCDIS, one of the partner organizations in the complaint, has graciously agreed to pay for  all filing fees, disbursements, discovery expenses, expert feeds and reimbursement for expert expenses. GNJ will have no obligation for those or any other costs of the litigation. GNJ will provide for its congregations a study guide and Bible study materials.

For more information on the legislation and issues of segregation, click here.