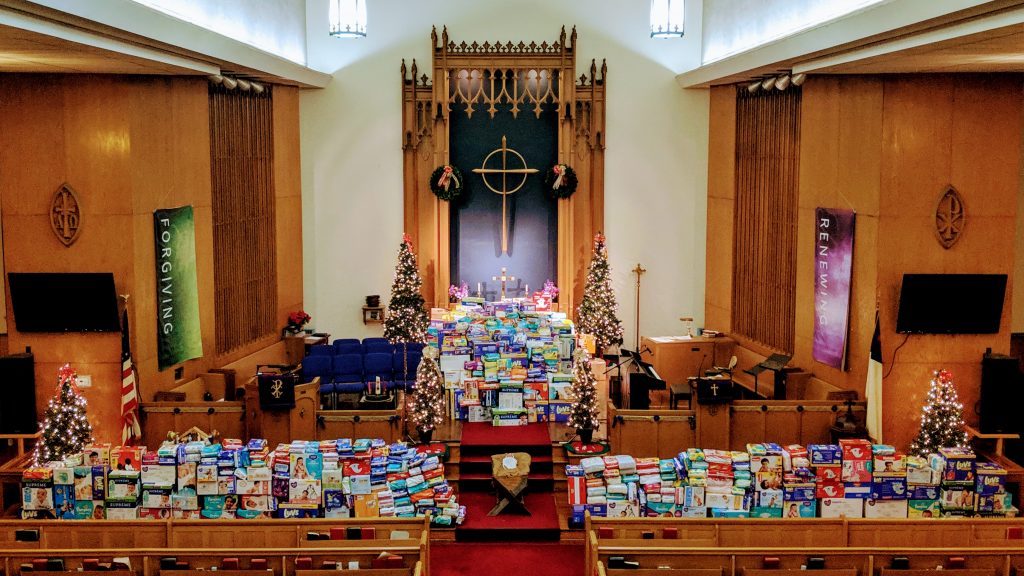 87,000+ diapers are displayed on the altar at Turning Point UMC in Trenton as a result of The Maker's Place diaper drive. Photo provided by Rev. Michael Reed

TRENTON – For children in Trenton who reach their first birthday, there will be plenty of diapers to go around; over 87,000 to be exact, all due to United Methodist churches in Trenton and throughout Greater New Jersey partnering to collect them for low-income families with babies in the state capital, which has one of the highest infant mortality rates in America.

The effort was spearheaded by The Maker’s Place, a new Trenton-based mission initiative of United Methodists in Greater New Jersey.

Rev. Michael Reed was appointed to The Maker’s Place in 2018 and put out a call to United Methodists in GNJ to participate in its holiday diaper drive. On December 16, Turning Point UMC in Trenton became the collection depot where volunteers were ready to welcome participants with high-fives and hot drinks. Reed encouraged churches to bless and pray over their diaper collections during services and to pray together as congregations for the mothers and babies who would receive the gifts as well as for the formation of relationships with families through Maker’s Place.

“These congregations made a change for babies and families living in poverty and at the same time partnered to launch a new mission and ministry in Trenton,” said Reed. “Our prayer was that the light and love of Christ – born as a child, born as one poor and marginalized – would be with these congregations in the Christmas season as they shared Christ’s love with others.”

When Lucy, a high school student who lives around the corner from Frenchtown UMC, heard about Maker’s Place diaper drive, she started her own, reaching out to friends and neighbors, surpassing her goal of 2,000 diapers.

Within days, the word spread and tens of thousands of diapers were collected. From 2,000 to 10,000, the goal kept expanding. Churches, workplaces and friends gathered diapers by the thousands. In total, more than 87,000 diapers were collected with the help of nearly 40 congregations and community groups from across the state.

The diapers will be distributed at community birthday parties this year, celebrating one year olds and their families. These ‘First Birthday Parties’ will be sponsored by The Maker’s Place in partnership with The Children’s Home Society of New Jersey, along with community partners and other congregations including African UMC, Turning Point UMC, Trinity UMC in Ewing and Iglesia Metodista Unida Wesley. The parties will also provide resources to reduce Trenton’s high infant mortality rate with the first party being held on March 2 at Turning Point UMC.

“I had a goal of 10,000 diapers,” said Reed. “We got a bit more than that. Oh me of little faith. I certainly was blown away and am so thankful for everyone who supporter this project. It was affirming for me to see individuals and congregations getting excited about mission. I think The Maker’s Place is off to a great start!”

Reed believes the diapers were a way of saying, “Unto us a child is born.”

“If we follow Christ, who taught us to ‘love our neighbor as ourselves,’ then we too can say, ‘These are our babies. And these mothers are part of our family.’ The 87,000 diapers were a concrete expression of Christ’s love and peace. They also prove just how much we can do when we do it together. That’s what The Maker’s Place is all about: a place that connects neighbors with neighbors, so that together, we can live into the powerful idea that we multiply everything we do, when everyone’s gifts and assets are included.”

Reed considers the 87,000 diapers as proof of God’s divine economy of abundance.

“I believe that’s a small picture of how Jesus saw the world,” he said. “Jesus invites us to consider the radical truth that we live in a ‘divine economy of abundance.’ God made the world to be a place of life and abundance for all people. It’s an idea wrapped up in the peaceable kingdom of God, which Christ announces during his first advent. When Isaiah, long before the time of Christ, looks towards the future and says, ‘Of the increase of his government and of peace there shall be no end,’ I don’t think he had diapers in mind—but maybe he could have! God’s peaceable kingdom increases whenever we take what we have and give it to God, so God can multiply it for God’s purposes.”

About The Makers Place

Trenton is famous for its slogan, “What Trenton Makes. The World Takes.”, which was adapted in 1917 to represent Trenton’s role as a manufacturing center.

“The changing economic reality of the city often challenges that message,” said Reed. “Our aspiration is to create a place where all people are empowered to be makers, and where all people experience the abundant life of God the Maker.”

A few years ago a handful of folks in central New Jersey started to dream about the vision for Maker’s Place: a multiethnic and economically diverse community in Trenton where all people could experience the wide welcome of God, and where United Methodists from across the state could live out God’s love in action.

The Maker’s Place has started with initiatives centered around food and families, and in partnership with four United Methodist churches in Trenton, cultivating transformative relationships and helping people build bridges out of poverty.

“We’ve begun to identify core team members and volunteers,” said Reed. “We’ve started doing community walks and meals, and have partnered with a local elementary school to distribute food and clothing. We’re building relationships, starting new spiritual conversations, and taking stock of the abundant resources and assets already present in Trenton, and in the lives of the people around us.”

In January, Susan Victor was appointed to join Rev. Reed at The Maker’s Place. Victor serves full-time as the Director of Counseling at Womanspace, a Trenton-area non-profit that works with women, men, and families impacted by domestic and sexual violence. Alongside her work at Womanspace, she is also ordained as a United Methodist Deacon. Princeton UMC has been the context of Victor’s secondary appointment for the past nine years. Pastor Jenny Smith Walz and the congregation are sending Victor to The Maker’s Place with their blessing, and with the intention of building a stronger connection between the new ministry and their church.

“Susan’s expertise, dedication, and passion will be a tremendous asset to The Maker’s Place,” stated Reed. “I’ve had the opportunity to get to know her better over the last several months, and I’ve been tremendously impressed by her immense personal capability and strong spiritual commitment to serving others.”

The Maker’s Place is organizing around a mission of food and families and is looking to establish a more permanent location and flagship ministry this year.

“But we can’t do it alone,” stated Reed. “The Maker’s Place will only work if all of us remember that our own well-being is bound up in the lives of our neighbors, whether near or far.”

The Maker’s Place is looking for early adapters to dream and become active in their mission by incorporating their passions, gifts, ideas and interests. They also seek prayer going forward. If you want to volunteer give, or collaborate, or find out more information, visit www.makersplace.org or email Rev. Michael Reed at michaelreed@makersplace.org